Unique and personal perspectives on life in The Pale. This week: Oisin Davis

After living in Jersey City for the first decade of my life, we moved to my mother’s hometown, Dublin. My parents had divorced and the neighbourhood we were living in was starting to deteriorate rapidly. My father stayed on in his native city and we hopped on a plane to Ireland.

It took a long time for me to find my peace with this place. The food here in the 80’s was brutal and I quickly realised why. There was nobody here of any skin colour that wasn’t lily white and freckled. Consequently, no proper New Jersey pizzas, bagels and barbecued chicken. These had been my dietary staples. And although I was well used to tough city kids, on my own I was no match for the lads from Charlemount street and Swan Grove, who on my first day of school beat me up because I asked the teacher if I could please use the “bathroom.” As punches landed on me, one of them shouted, “We don’t say bathroom here, we say jacks!”

But eventually I started to find my groove somewhat. Many of my tormentors became friends and I discovered local culinary gems, like Connemara spring lamb with mint sauce. And Monster Munch, washed down with TK red lemonade. One or two Irish food items I could have done without though, even if I adored them. My current dental woes can all be pinpointed onto my childhood obsession with Wham Bars and Refreshers.

It also dawned on me that Dublin people appeared to be a lot happier than Jersey City folk. People always seemed to be laughing over here and it was rather endearing. Whereas back in JC, there was always something to bitch about ­ the humidity, the 2 feet of snow or the new ethnic minority that our neighbours hadn’t warmed to yet. This innate Irish contentment, was growing on me. Ironically, it also enabled to me connect with the Dublin wit and sense of humour. Nobody embodied that better than a fella I used to buzz with years ago. I never knew his name and he never knew mine, but I’d call him Joxer and he’d call me Jameser. He was working as one of those self employed parking attendants on Dawson Street where I had a job cleaning offices as a 19 year old student. One of those lads who’d help you plonk down your automobile aided only with a rolled up newspaper and a bellowing voice.

One evening, when he was stationed outside Cafe en Seine and we were shooting the breeze, the comedian and actor George Wendt (best known as Norm from Cheers) was leaving said bar and was walking our way.

Immediately, Joxer set upon him.

“You’re fucking brilliant. I loved you in that show!”

“Why thank you. You’re most kind.”

“Yeah you were brilliant you were. Yourself and that other fat fella….”

George suddenly realised that he was the subject of a very quick gag. He smirked and then moved on while Joxer and I laughed out loud. For some reason, this was the precise moment when I felt I truly understood this town and its people.

It only took a decade or so. 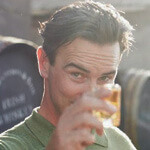 Oisin Davis works as a drinks consultant through his company Great Irish Beverages.This entails assisting brands in creating new products, travelling the world evangelising about Irish whiskey and running a series of Irish drinks festivals round the country. He's basically all about that booze.

You’ve probably heard that Stoneybatter has been gentrified. They wrote about us in The Guardian, so it must be true. As the fourth generation of my family living in the neighbourhood, the notion of gentrification sits uncomfortably with me. Certainly, we have seen changes in recent years, and some of my neighbours have been given the short end of the stick since “boomtime” passed. The people still living in the O’Devaney Gardens flats were abandoned without the new homes and services that they’d been promised. Like anywhere in Dublin, rents are soaring and building companies are buying up property by the handful, which has priced some people out of the neighbourhood.