Unique and personal perspectives on life in The Pale. This week: Fergal McCarthy

When I was a kid we would drive to Dublin once or twice a year from County Limerick and get excited as we passed under the flyovers on the dual carriageway somewhere near Naas. The Ilac Centre had glass elevators back then, and we would ride them repeatedly before going for ice-cream sundaes on a terrace near the library. I won some anti-litter art competition when I was very young with a picture coloured in with markers of St Stephen’s Green covered in apple cores and cigarette butts.

I moved to Dublin when I was 26, living originally in Temple Bar and eventually settling in the Liberties in a house originally built for Guinness employees. I began to fall in love with the river, that view west from the middle of the Ha’penny Bridge is my favourite part of the city. I started to swim in the river, climbing down the metal ladder on the quay wall you immediately enter another world.

Driving along the north quays, near the early house with one or two drinkers outside, an image of red and green Monopoly houses bobbing in the river came to me. The city was in the grip of a crazed building spree at the time, planning seemed non-existent. I tried and failed to make my idea a reality. Some years later, all the cranes disappeared from the skyline and an arts festival commissioned my project. The houses lit up in the dark and crowds gathered at night drawn from the outlying suburbs. A year later I rowed down the river and arrived at a desert island close to the port where I lived for seven days. Sitting there for hours at a time I began to imagine the quays reconfigured as a space for people rather than traffic.

My interests began to widen beyond the river, I’m fascinated by what makes the city tick and how it could be improved. I possibly could never live anywhere else, as my work as an artist is so firmly rooted in the geography and social fabric of Dublin.

The Little Museum of Dublin recently asked me to make a series of drawings in relation to the 1916 Easter Rising that would be made into a book and an exhibition in their ground floor gallery on St Stephen’s Green. I spent several weeks walking around the city in the footsteps of Countess Markievicz, James Connolly and other leaders trying to get a sense of their lives. I looked at hundreds of photos of Dublin at the time until I had absorbed enough visual references to begin. I pieced the story together slowly and tried to retell the narrative in a playful, streamlined manner using humour wherever possible to add colour.

As a transplant from small town Ireland, I could never claim to be a Dubliner, however my work is drawn entirely from my surroundings and on that level Dublin makes everything about my working life possible.

Fergal McCarthy’s book 1916: A Country Is Born – A Cartoon History Of The Easter Rising is available now. 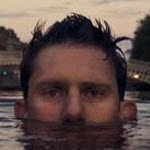 Fergal McCarthy is best known for his large scale public art projects on the river Liffey. He also makes films, sculptures and drawings and has exhibited widely in Ireland and across the world.

I didn’t get to Dublin until I was five but I embraced it, pronto. Either that, or the force of impact turned my California twang into a Dublin one, and my blonde hair mousey within a week. Aiming to please, and blend in, at all costs became a survival strategy for growing up in the Liberties, where intimate, narrow streets hosted hops heavy breezes from the Guinness brewery. There, they