Unique and personal perspectives on life in The Pale. This week: Jules McFadden

I didn’t get to Dublin until I was five but I embraced it, pronto. Either that, or the force of impact turned my California twang into a Dublin one, and my blonde hair mousey within a week. Aiming to please, and blend in, at all costs became a survival strategy for growing up in the Liberties, where intimate, narrow streets hosted hops-heavy breezes from the Guinness brewery. There, they mingled with the sooty fumes slinking out of every chimney, settling in a cozy, redolent smog, a seeming friend against the damp, infiltrating lung and bone. That same smog was visible in summer, like a cartoon swarm of ants against a Superser-orange-glow sunset.

On Lombard St. West, dinky little Victorians were terraced neatly, like teeth, framed by teency front gardens planted with pansies, snapdragons, sweet williams and other choice ‘70’s blooms. I used to ask the blue rinses to name for me all their flowers, and they were happy to oblige. The bijou streets in our red-brick warren were safe-seeming but latticed with menace behind fan-lit front doors. And local kids from nearby flats, like Charlemont St., were bent on terror. Sensing a vaguely middle class vibe off me, they laid in wait for school-route ambushes.

If I were to make adulthood, my meek machinations required evolution into toughness, a quick wit, and quicker judgment pronto, so I learned to slag or charm my way out of invidious situations. I’ve never quite been able to shake the shyness.

Years later, at college, I shrouded myself in smoke and lived a sheltered enough existence; a half-life of near total intoxication. It’s a credit to Irish men that I wasn’t taken advantage of more heinously. People weren’t terribly friendly. Undergrads viewed each other with cool suspicion. And my high heels were very ill-served on the cobbles of Trinity. Those were my chief complaints.

Was it still that early urge towards conformity that made me bear (so willingly) the stamp of all Irish stereotypes, by the time I was of age? Libertine with language, intrapersonal yet gregarious, alcohol oriented, slippery, evasive, connective, discriminating, warm, skeptical, influential, insinuating, reckless.

Thus equipped, and with not much more, I legged it to New York, where my neatly-whittled defense mechanisms and cheerful disposition served me well in swerving many disastrous fates. One might even claim I prospered, albeit with little to show for it but peppery anecdotes, sun damage and the joyful restoration of my blonde hair, (ta, Vidal Sassoon). Certainly by the time I repaired back to Dublin, a decade later, I cut quite a confident dash relative to the spiky little maelstrom I left as. I was careful to return with an American husband. I knew I could never repatriate unmarried and be forced to contend with male tribe-members, much as I revel in their saucy nonsense.

My heart exploded to be ‘home’. A rash surge of love for fellow Dubliners lasted years and years. We settled in a Dublin unrecognizable to my impeccable inner city credentials, a mere nine kilometers from the city centre: we’re talking deer, cattle, rolling valleys, mists, fields and million dollar views. We were positively bombastic about our American adventures, regaling rapt audiences who found us comical and refreshing in our staggering naivety. We hadn’t a bean, or a plan or an inferiority complex to rub between us. We’d never heard of status anxiety and barely noticed our peers’ achievements and eh, money.

Flash-forward another decade and our corners have been rubbed right off. We live in Dublin city proper again and I’ve more or less returned to my pre-American persona: cynical but cap-doffing, fairly embattled, jovial but daunted, wistful but circumscribed. The American husband has kept his confidence intact.

But Dublin made me; twice, it seems. 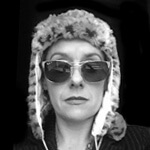 Jules McFadden is an ice­ cream cone manufacturer perching precariously in Dublin south central. She writes under various pseudonyms, in various genres and is currently working on her first novel.

I remember seeing the DART for the first time. I was 7 years old. It was 1984. I thought it was some impossible machine out of a science fiction movie. At that time, I lived with my family in the remote wilds of Blanchardstown, West Dublin, and as such, the DART wasn't likely to be a part of my daily life. But the very next year, we moved to Donaghmede. Howth Junction Station lay just around the corner from our house. And, from that moment on, if we were availing of public transport, we were hopping on the DART.

I believed up until relatively recently that I was a mixed-race Dubliner. ‘My dad is a North Sider, and my mother is a South Sider!’ I would declare, explaining away my propensity for Chipstix-and-cheese bread rolls washed down with a carafe of Amerone. My brothers and I have always joked that my Coolock-born dad must have nicked our Dun Laoghaire-born mother’s handbag, led the chase north of the Liffey and eventually coerced mam into staying there.

Any day in axis Ballymun is filled with potential. That's what makes working in the arts and in a community as vibrant as Ballymun so special. For me arts, culture and creativity is about people, about ideas, about synergies and most importantly about listening - really listening. axis is all about this, about creating a space where people can be entertained, try out new ideas in a safe environment, meet, discuss, and come to the heart of the northside to make magic. I have had the pleasure of working in Ballymun, with a great staff, community, artists, and a multitude of stakeholders for nearly 12 years now, and I can safely say that no two days in all that time has ever been the same.