Unique and personal perspectives on life in The Pale. This week: Sharyn Hayden

I believed up until relatively recently that I was a mixed-race Dubliner.

‘My dad is a North Sider, and my mother is a South Sider!’ I would declare, explaining away my propensity for Chipstix-and-cheese bread rolls washed down with a carafe of Amerone.

My brothers and I have always joked that my Coolock-born dad must have nicked our Dun Laoghaire-born mother’s handbag, led the chase north of the Liffey and eventually coerced mam into staying there.

But on a recent stroll with my ‘South Side’ Mother, she told me that her maternal grandmother actually owned and ran Whelans’ pub in Summerhill with her husband, and that is where my grandmother was born.

‘The City Centre?’ says I, in between slugging from a bottle of Evian to wash down my Findus Crispy Pancake. ‘Smack bang, like, right in the middle?’

‘Oh yes’ says she, in her (totally fake) Dun Laoghaire accent. ‘We used to sit up on the roof as children and look out over the entire city’.

When I asked how she ultimately ended up all the way out in affluent Dun Laoghaire, she explained;

My personal existentialist nightmare aside – I’ll eventually work it out in therapy – I have always been a Dub And A Half.

I’m the kind of Dub whose dad brought my brothers and I to matches in Croke Park when the local vendors were still on the premises, with prams and carts full of chocolate bars and bags of crisps for sale.

‘How much for the bars?’ my dad would enquire.

‘30p each or three for a pound, love’ came the butter-wouldn’t-melt reply.

‘I’ll take the three, so’ he’d say, and happily hand the pound over.

My dad was, and still is, an accountant. Surprisingly.

I’m also the kind of Dub who tried to leave and live in other countries for work over the years, thinking that I might be happier, or more at home, in some other better place else.

I wasn’t, and there never was a better place.

Every time that goddamn plane descended and the east coast came into view as I arrived back, a lump caught in my throat and I was always so unbelievable happy to be back here.

I feel like I so thoroughly know the people in this city, that we share the same blood, that I can stop and pass the time with anyone who has a moment to chat.

And if they’re not interested, or stare me down, or refuse to acknowledge this fellow Dub who is hoping to have a gasbag about the weather, the fab deals you can get in Penneys, the hack of the Spire or how the seagulls are getting more aggressive..

Well then, I just think.. 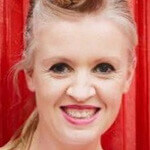 Sharyn Hayden is a journalist with parenting website www.herfamily.ie. She is also an author and comic actress. Her debut book ‘I Forgot To Take My Pill! debuted worldwide in May 2015. She lives in Dublin with her two children Jacob and Eva.

Most 4-year-olds are almost as digital savvy as their parents, and there's a high probability that your average toddler knows his or her way around an iPhone better than you do. It's still something of a surprise, then, to discover that the touchscreen generation can be as enthralled by a visit to the Lambert Puppet Theatre as their parents ever were.

Attention Dubliners: we’re incredibly lucky to inhabit a city with such foodie inclinations and a culinary largesse. Right now, Dublin offers an exquisite blend of Michelin-starred fare, outstanding street food, hipster eateries and friendly local restaurants. And let’s not forget the evolution of our drink culture either. We were once a city of avowed tea drinkers and pint lovers; we’re now as au fait with cocktails and customised artisan coffee blends as any seasoned mixologist or barista – and loving them. We’ve also fully embraced the juicing phenomenon, but still find time for a cuppa. Or three.

Young people are the future. It’s why we cherish them and invest in them. That’s not to say that everybody would necessarily be thrilled at the prospect of 20,000 students arriving on their doorstep, which is exactly what will happen at the Dublin Institute of Technology’s formidable new Grangegorman Campus. Thanks to meticulous planning and a comprehensive vision of what the whole area will become, however, this dramatic swelling of Grangegorman’s population is being anticipated with something resembling excitement.