As the pandemic wore on into 2020, and the use of face masks became ubiquitous, the Dublin Place Brand team partnered with the National College of Art & Design (NCAD) to create a series of eye-catching designs.

This project aimed not only to keep people safe, but also to celebrate what it means to be a Dubliner. We asked the students at NCAD to highlight Dublin’s creative, cosmopolitan and unique elements within their designs and instil them with a sense of place and belonging. Over 30 high-quality designs were presented, from which seven outstanding designs were chosen.

We then worked with a small, Dublin based company, Irish Made Masks Ltd, which took the designs and turned them into high quality, 100% sustainable cotton masks. They also created well branded, hygienic packaging.

The masks were distributed via public competitions, distributed to DCC staff and councilors and made available to city stakeholders. Read on to find out more about our student designers.

Sam Hannigan
Inspired by the use of maps in American graphic designer Paula Scher’s work, I wanted to create a face mask that portrayed an aerial view of Dublin City. Using the recognizable shape of the city, I incorporated these strong colours, which are simultaneously eye-catching and uplifting. I kept the logo black, as it stands out well against the yellow and positioned it carefully so as to not take away from the design or have the design over power it. I wanted to reflect the usual high energy and diverse nature of Dublin City and I think that’s what this mask does. 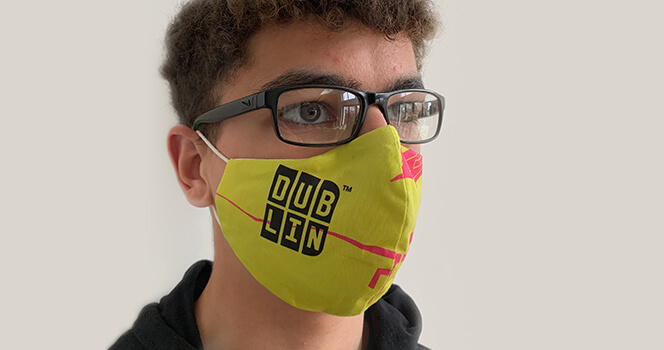 Nadia Sherlock Carter
I’m not from Dublin myself and the Luas is something I would be quite familiar with as an outsider. It’s all around the centre and something we don’t pay much attention to when going about our day to day lives, but something incredibly useful and present nonetheless. I developed the design with the intention of making something strong and graphic, something that wouldn’t get lost on a face mask, but would also ring a bell for those looking at it. I think the yellow bars against the deeper purple stands out like that. 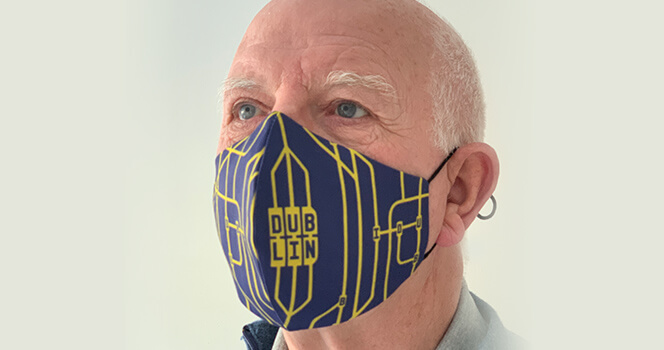 Megan Luddy
I decided to draw inspiration from the “Lady on The Rock” statues, which can be spotted in the windows of houses all around Dublin city. She’s a symbol that Dublin city dwellers picked for themselves, for no reason other than that they like her, and I think that really speaks to the playfulness of the city and the strong sense of community. She was also friendly face to anyone who found themselves walking around the city during lockdown. I wanted to take this symbol of Dublin city community and then reinterpret it to reflect the diversity of Dublin’s residents. 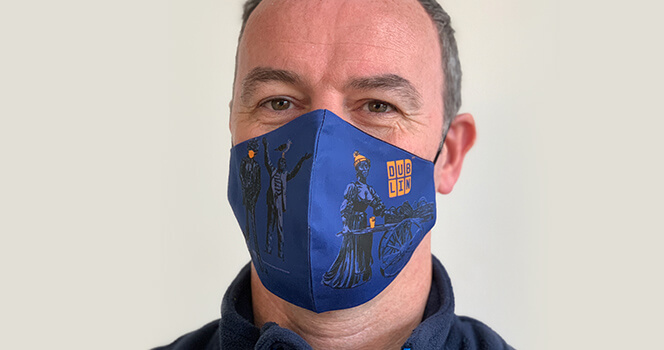 Hannah O’Connor
I love the older parts of the city and on a recent walk, I was drawn to the beautiful street lamps. They aren’t really something that I had noticed before, but there is definitely something about them that feels so uniquely Dublin. Each one is like a piece of art. I really wanted to showcase this beautiful, older side of Dublin in a contemporary and vibrant way. Now more than ever we need to look on the bright side of things, and I thought it would be interesting to use the lamps to capture that sentiment in a literal way. 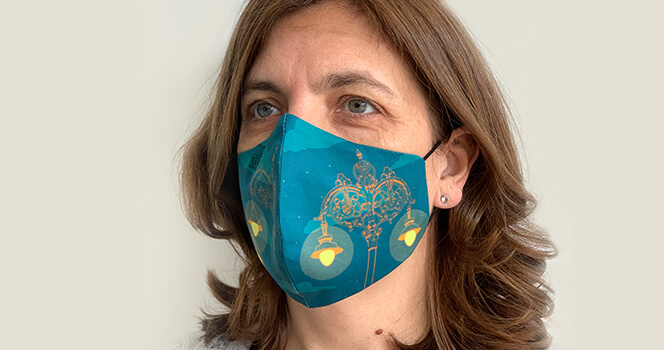 Grainne Halpin
When I think of Dublin, the people and the buildings come to mind equally, with statues as a kind of inbetween, representing its culture. I thought these three statues were some of the more recognisable or important statues in Dublin. The statues also included everyone – they’re surrounded by tourists taking pictures in the daytime and at night local Dublin comes out, letting the statues guard their drinks and giving them hats in the winter. Even the seagulls rely on them. 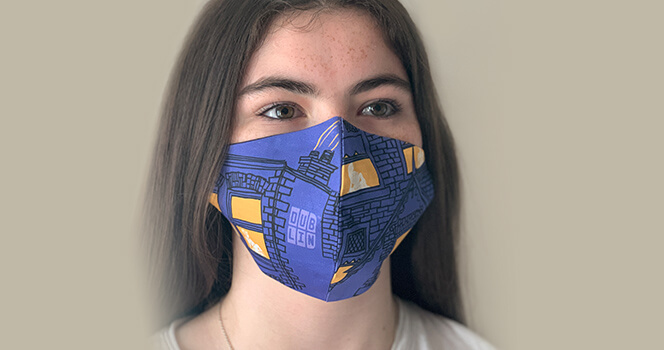 Ellen Owens
This project made me really think about the essence of Dublin. One of the things that stands out to me the most about Dublin is the colour. I chose the bright colours for this mask to boost moral and have something bright and cheery in a difficult time. I wanted to use Irish on the mask to channel pride in our city and our nationality. I wanted to convey the message that our collective efforts make a huge difference, and that in such uncertain times, Dublin is a united city, now more than ever. Grainne Halpin
Street signs are one of my favourite things about Dublin. As a native, I find them comforting and helpful to double check where I am, so I imagine tourists or people newer to the city must find them just as handy. On these masks, instead of street signs, I put seanfhocail. I love Irish, and seanfhocail are a really nice way to have Irish present without having to understand Irish – many of them are recognisable in their own right. This one basically means ‘However long the day, night comes’. While a seanfhocail isn’t necessarily understood by those from outside Ireland, I think that the street sign is familiar enough to breach that gap and maybe provoke curiosity. We sat down with Professor Philip Nolan, president of Maynooth University, to discuss his plans for the university, which lies on the periphery of Dublin. His role focuses on creating a strategy and implementing this to grow and develop the university. Maynooth University is home to over 1,000 staff and 13,000 students, and more than 1,200 of these are international students hailing from over 60 countries. The university offers a wide range of excellent academic programmes which are delivered by leading researchers in various fields, and students are challenged and encouraged to reach their full potential in this top-class learning environment. C