In conversation with Panti Bliss

When the Marriage Equality referendum passed in May of 2015, Ireland’s dearest drag queen Panti Bliss took her place on the podium at Dublin Castle.

Standing alongside Sinn Féin’s Gerry Adams and the then-Minister for Justice Francis Fitzgerald, she addressed the emotional crowd.

Rory O’Neill’s alter ego, Panti, who had always been in the peripheral vision of the Irish people, was now front and centre having played a hugely important role in the Yes campaign.

I don’t think Dubliners accept anyone as a Dubliner, unless they were born here.

Today, Panti performs all over the world, but is still based in Dublin. She’s even making her own mark on the cityscape.

At dusk, the gloriously cartoonish PANTIBAR sign glows red and beacon-like on Capel Street. Just beyond it, the Liffey ripples and the pale green dome of City Hall can be seen in the distance.

So is Panti a Dubliner? Rory O’Neill isn’t so sure. 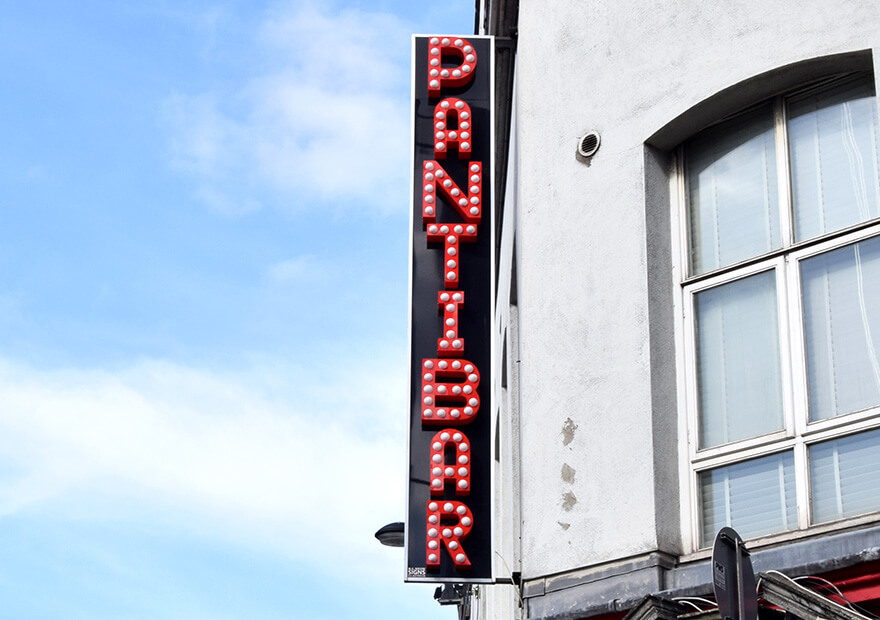 “I don’t think Dubliners accept anyone as a Dubliner, unless they were born here,” he says. “Like so many things in my life, I think of myself as somewhere hovering in the middle. In one way, I feel very much like I’m from Mayo, my family is in Mayo…”

However, Dublin is “absolutely home” for him. It is somewhere that has always offered a different view of life – be it on visits as a boy to see his granny in Dolphin’s Barn or getting the train to Dublin en route to boarding school in Gormanstown.

O’Neill’s best friend in school was from Blackrock. “That’s where I would be first sneaking to have a drink… Dublin did sort of represent a freedom,” he says.

Moving to Dublin in the 80s

After school, O’Neill moved to Dublin to study art in NCAD. He first performed in drag at his graduation show. However, despite its appreciable freedom, Dublin in the mid-80s was still a difficult place to be fabulous. O’Neill discovered the city’s underground gay scene, but it wasn’t enough for him.

“Dublin was pretty depressing, I think for everybody at the time,” he laughs. “It was grey and nobody was working.”

I thought, I’m getting out of Dublin.

It was particularly colourless for O’Neill. “I was reading I-D and The Face magazine and hearing about club kids and the weirdness and the boys with eyeliner and funny haircuts,” he explains. “Then, I’d take my face out of The Face and look around – and it was rockers in paisley shirts with long hair…”

Conversation with O’Neill is punctuated with wicked little asides and hearty laughs. He sums up: “So even though I had a great time as a college student, at the same time, I thought: I’m getting out of Dublin”.

To Japan and back again

After college, O’Neill left Ireland for Tokyo where his Panti Bliss persona made her debut. He stayed there for five years.

“I adored Tokyo and had the best time of my life… but you’re always the foreigner there – especially if you’re a big white guy,” he says.

When his close friends moved on, it was time for him to go too. It’s Paris next, he thought. However, when he came home to visit Ireland in 1995, he noticed things were different.

The city was changing. There were cranes everywhere.

“It was the beginning of the Celtic Tiger. When I came back, club culture had arrived. The Kitchen and the POD had opened in Dublin,” he explains. “The city was changing. There were cranes everywhere. They were building the Luas. There was a sense of possibility about Dublin. There were young people coming here from other places.”

In the newly vibrant city, the club nights and performances that O’Neill wanted to organise were suddenly possible. And there was another “much more boring” factor to his staying too. Having been diagnosed as HIV positive, in terms of medical care, “everything was easy and covered here,” he says. “It definitely played a part…”

Club culture, the Irish psyche and the epicentre of cool

Before Panti Bliss provided him with a full time job, O’Neill lived many different lives – as a puppeteer, a facepainter, a waiter at Elephant and Castle. “That’s when it was the first and only restaurant in Temple Bar,” he says.

He also sold jeans in McCullough’s on Suffolk Street – which was apparently “the epicentre of cool Dublin” at the time.

‘Oh my God, these weird gays are actually fun’…

Dublin in the 90s, he says, was a freer place because of club culture. “I have friends from those days, when I was in my 20s and going out raving, that I would never have met in any other circumstances,” he says.

Prior to that, anyone who wanted to dress up and be stupid was labelled weird and odd. Then, when club culture arrived, this was suddenly seen as an asset.

For it to go viral was a total shock to me.

Having witnessed first-hand as Dublin became “more open and accepting and proud to be more open”, O’Neill says he has a long-standing faith in the Irish psyche.

“We’ve a lot of our own problems, but one thing that we’re actually generally pretty good at is fairness,” he says. “Fairness is highly valued here… maybe because of our history. I think that saves us from some of the worst excesses.”

For years, Panti Bliss has been a prominent figure in Dublin’s gay community. She often leads the LGBTQ Pride Parade and emcees the annual Alternative Miss Ireland competition. So did she feel a certain responsibility to be at the fore of the Marriage Equality campaign?

O’Neill says the referendum was simply something he believed in. “Because I did have a kind of profile, my contribution would be more obvious,” he says.

I was just doing my thing and sometimes my thing has bigger effects than I anticipate.

Then came Panti’s ‘Noble Call’ speech and all was changed utterly. After O’Neill appeared on a late night RTÉ chat show to discuss the referendum, his words prompted a lawsuit which became known as Pantigate.

Soon after, Panti Bliss appeared on the stage of the Abbey Theatre and made an eloquent speech on acceptance and equality. One commentator compared her to the historic national leader Daniel O’Connell. However, it was never intended to make such an impact.

A face of modern Ireland

“I was just writing a speech, because I was annoyed and I had an opportunity to be annoyed in public,” he says, reflecting on that time. “For it to go viral was a total shock to me.”

Stephen Fry showed his support – as did Graham Norton and Madonna. The Pet Shop Boys even remixed words from the Panti Bliss speech.

“There was a lot of stuff going on at the time, the legal stuff… So I never really had time to take it in,” O’Neill says. “When I think about that now, I think: ‘God, that is pretty cool’.”

Nevertheless, O’Neill balks at the idea of being an Irish hero.

“I was just doing my thing. And sometimes my thing has bigger effects than I anticipate,” he says. “The reason I made those speeches and get annoyed about things is because I want to make my life easier. People think I’m some sort of selfless saint who does all these things only for other people, but I’m one of the people I’m doing it for.”

Having appeared as the eloquent Panti Bliss on the BBC and Channel 4 news, one wonders if O’Neill has done something to change the perception of ‘Holy Catholic Ireland’ on an international scale.

I got into drag because it was anti-establishment…

“I don’t think that me appearing on Channel 4 news in a dress is really going to change a huge amount,” he says. “The world’s perception of Ireland has been lagging behind what Ireland is for quite a while and that annoys Irish people.”

While he might not have changed things, the marriage referendum certainly did. “Ireland, of all places,” says O’Neill. “That gets said to me all the time when I’m abroad… It did say to the world: ‘We’re a modern, forward-thinking nation’.”

“I thought that very little would change afterwards. I thought if it was ‘Yes’ that everything would be exactly the same, except gay people could get married,” he says. “Actually, I think it was much more powerful because we did it by referendum.”

He believes it changed how Ireland’s gay community feels, because it now knows exactly how the rest of the country feels about LGBT rights.

“We can quantify it,” O’Neill says. “Before the referendum, I hoped and guessed that most Irish people were cool with the gays, but I didn’t know that.”

And how does he feel about the great evolution of Panti Bliss?

“It’s hilarious,” he says. “I got into drag because it was anti-establishment and discombobulating and transgressive and punk. You know, two fingers up to everyone’s expectations of how you should behave and dress…

“So to end up in a weird way being a kind of establishment figure is just absolutely nuts.”

However, this progression suits O’Neill just fine. “I think it says something bizarre, but kind of nice, about Ireland that that was even possible,” he says.

For the immediate future, O’Neill plans to continue with his writing and theatre shows. And what of the people who ask Panti Bliss to run for president?

“I’m actually really bad at that kind of politics,” O’Neill says, quite serious now. “Photocopying machines and meetings. I hate meetings more than anything else in the world. So no, I’d rather be Twink than Mary Robinson.”

Part of the city’s social fabric The Abbey Theatre has long been part of our city’s story. Nestled in the bustle right at the heart of Dublin 1. You’ll find it amidst the comings and goings from Busáras and Connolly station, the Luas clangs past its door and the River Liffey’s squawking seagulls are within earshot too. President Michael D. Higgins regularly attends opening nights, a straight run for him down the quays from his residence at Áras an Uachtaráin in the Phoenix Park. The last time I wandered down that direction, there was a