You’re the HR manager at a Dublin-based corporate. Your new hire has everything you need. Well, nearly everything.

All they lack is the conversational English they’ll need for you to get the best out of them. Which is a pity – because that vital project starts in two weeks’ time. You need to talk to Salvatore Fanara and Rosanna Fiorenza of Travelling Languages. But first, romance.

He was an engineer from southern Sicily. She was a banker from Turin. It was 2006.

Salvatore: We met in Turin a few weeks before we moved to Ireland.
Rosanna: He told me that he was planning to go somewhere to improve his English.

Salvatore: We were looking to do something different, to make a big change.
Rosanna: I decided: look, I’ll quit my job, we’ll pack and we’ll go.

Salvatore: London, Dublin, Edinburgh…? In the end we just packed the car and we drove from Turin to Dublin.
Rosanna: I worked in banks for another 7 years here. But I‘d had enough of banking, finance, I wanted to change, I wanted to do something else. So we brainstormed.

Salvatore: I remember thinking that if I wanted to scale up my own working life I really needed to get up to speed properly from a language perspective with someone who’s not Italian. The starting point was when we realized that a lot of people weren’t satisfied in terms of the results they were getting from traditional language programmes: we’d identified a gap in the market.
Rosanna: We came up with the idea for Travelling Languages in 2011 and I finally quit my job in 2013. 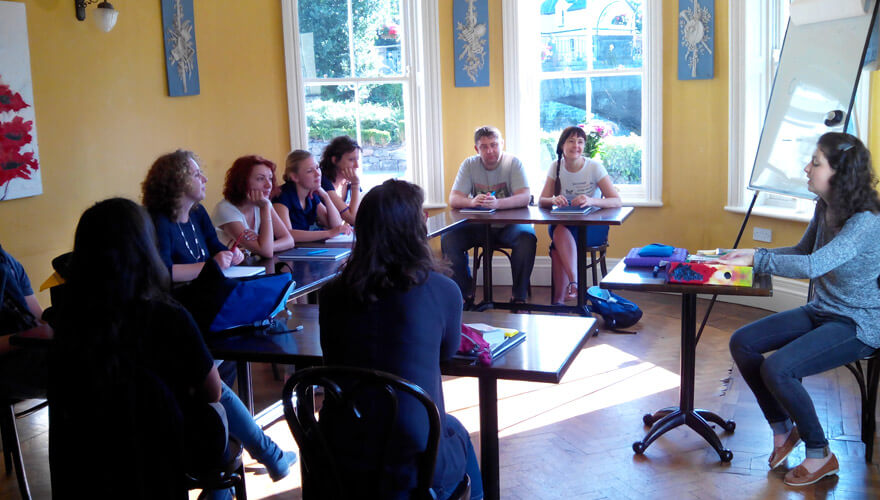 Dublin.ie: Why Travelling Languages?
Salvatore: We heard people saying that if you’re used to living in big capitals in Europe, Dublin is nearly a village – let’s say a town. So we said there’s not just Dublin you know – you can spend a couple of days in Dublin but the rest of Ireland is out there too: we’ll take you round the place, you’ll see lots of places, meet local people, and that’s when you really feel what Ireland’s about.
Rosanna: The other point about moving from place to place is that there are different accents around Ireland, so you get to understand different people very quickly. You can feel confident about talking to anybody at any stage – you don’t have that fear as a person who’s learning a different language: am I going to understand this guy? How many times am I going to ask ‘can you repeat that please?’

with most language courses is that when you finish your class, usually what you do is you open the door and go out and talk to other students, other foreigners or someone from your own country

Dublin.ie: So can we talk about the talk jockeys now?
Salvatore: What happens with most language courses is that when you finish your class, usually what you do is you open the door and go out and talk to other students, other foreigners or someone from your own country..
Rosanna: …which is the worst!
Salvatore: But with us, when you open your door there is a talk jockey waiting for you.
Rosanna: You know, there are DJs, there are VJs and we have TJs because our people talk – so our students will spend the rest of the day with one of our talk jockeys: usually one TJ for every five foreigners.
Salvatore: So they can keep the conversation going in English. What happens in the group then is that people start interacting in English, they go for lunch, there’s a full day of activities. Okay, part of them are touristic of course, we want to show them Ireland, but even from a company’s perspective, we’ve found that seeing more of Ireland can re-energise an employee’s enthusiasm for the place and the people. 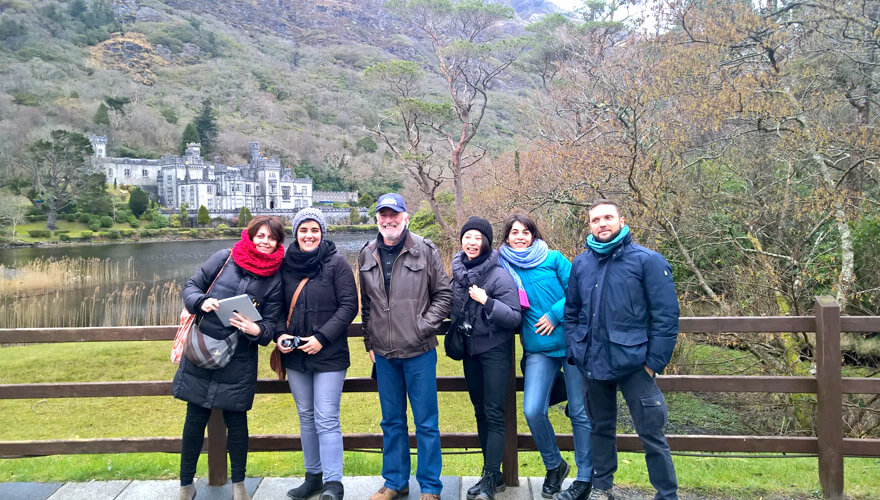 Rosanna: We learned that the way we built the programme from an education point of view is actually fantastic from a results point of view.
Salvatore: Most of the people get a result in two weeks which is comparable to two months in other programmes. You can really say ok, I can do this programme and come back to my job and get a phone call in English and I have no problem and that’s only in two weeks.

Dublin.ie: They say the real test is how long it takes someone to start dreaming in English…
Salvatore: On average it happens about ten days into our programme. It takes about six weeks in a normal programme. If your brain is concentrating so hard to avoid your own language you get to dream in English much quicker.

Dublin.ie: What about real-life? What’s Dublin like as a place to do business?
Rosanna: It’s great! We really mean it! Starting a business in Italy is difficult – there’s a lot of bureaucracy and red tape. You come here and you say ‘okay is it really that easy? I can do all this online?’
Salvatore: On average in Italy you might spend 60 days looking after bureaucracy – in Ireland’s it’s more like three days.

Dublin.ie: What do you miss most about Turin?
Rosanna: I miss the hot summers most. But that’s not an easy fix!

Dublin.ie: What do you like most about Dublin?
Salvatore: The weather. Because it’s never the same. No matter what you are doing in life, whatever you are experiencing, the weather shows you that things are moving, Dublin is moving on a daily basis. The weather reflects Dublin, Dublin reflects the weather.

Dublin.ie recommends you keep a weather eye on Travelling Languages – things move quickly around these guys.

For more information go to www.travellinglanguages.com/English-in-Ireland/

Pushbike couriers. You see them milling about on Dublin’s city streets every day. And if you don’t know one, or have never been one, they can be the subject of some curiosity. Why would you want to do that for a living? Is it a real job? Could you live on the money they make? Is it dangerous? Are they crazy? Well, seeing as I used to be one, I can answer some of these questions. But given that was back in the mid to late nineties, I caught up with one of them briefly, one who worked the streets at the time I did, and just so happens to be still out there. The big theme of our chat revolved around how much the city and the job has changed. I always remember couri