Mattress Mick’s got nothing on this place. This is the greatest gathering of mattresses you’ve ever seen, taking up most of the floor space in a warehouse in Glasnevin.

With stacks and stacks 20 and 30 deep, even the most sensitive of princesses could get a decent 40 winks here. If it wasn’t, that is, for the occasional high-pitched squishing noise coming from the machine that bales up mattress innards in preparation for recycling.

Meet the man behind Eco Mattress

Eco Mattress does two very valuable things simultaneously. As a social enterprise, it provides jobs and hands-on work experience for people in the north inner city. It also recycles old mattresses, saving thousands of tons of material from going to landfill.

From steel springs and polyurethane foam to fabric and fillings, every part of the mattress is recovered for use in industry or as fuel. There’s probably only one man in Ireland who could have come up with an idea like that.

At the warehouse next door, they call him ‘the mattress guy’ but his real name is John Scally. With over 40 years of experience in waste management, plus several more in community training schemes, it’s hard to imagine anyone better qualified to do what he’s doing. He’s the Director here at Eco Mattress Recycling Ltd. 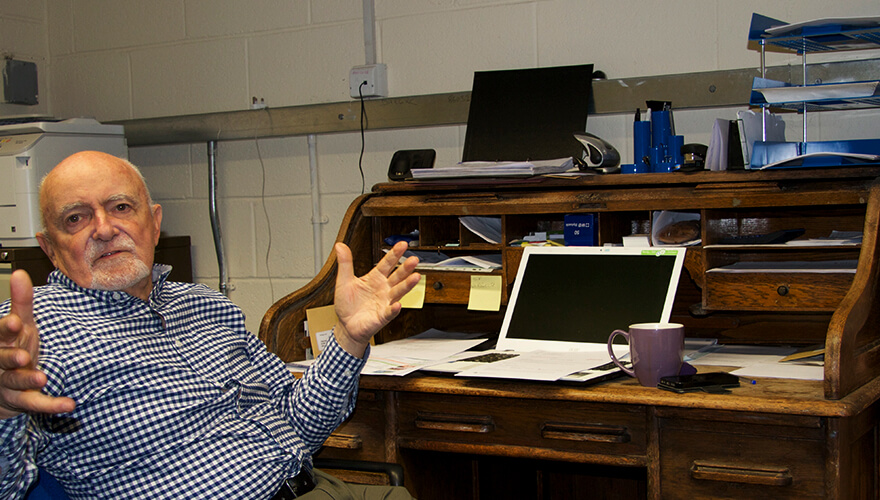 An eco-friendly business with a community-focused ethos

John had previously worked with locals from the north inner city, who successfully used waste management and recycling as a vehicle for community projects. He kept this in mind as he sought out a new venture.

“After I retired from the council, I joined up with Sunflower Recycling,” he says. “We were producing some very good employees down there, through the community employment projects”.

However, the trouble was that being a very good potential employee didn’t necessarily mean you could get a job. And this was at a time, 15 years ago, of “full and plenty”, as John calls it.

As John points out: “Some of our people would never have had the experience of seeing someone in the family leaving the house to go out to work”.

“We may have been training them up to be lorry drivers,” he continues. “We may have trained them up to be forklift drivers, prepared them for work and I would have been happy to send them anywhere, because they were capable. However, we couldn’t find employers who would take the next step with them.”

People use us to get to where they want to go.

At this point John began to get a bit fed up. So he began to think up ways that they could create jobs for themselves. “I knew myself we had to find some kind of niche thing, because we couldn’t compete against the big guys,” he says.

That’s when the mattress recycling brainwave struck. “At that time, mattresses had come to be a bit of a pain in the neck for people who were dealing with getting rid of them,” he explains. 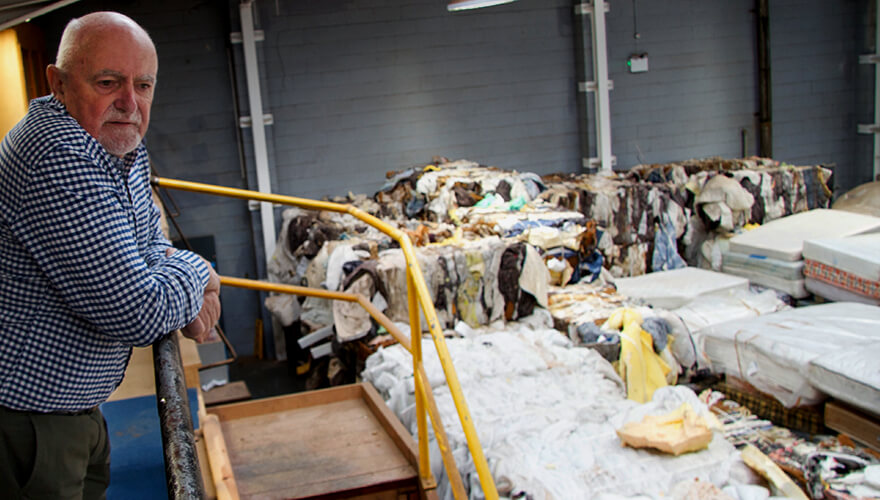 Getting Eco Mattress off the ground

After a lot of exploratory work, John presented the idea to John Gormley, who was Environment Minister at the time. He asked for a more concrete proposal and an estimated startup cost. Soon afterwards, the money required came through.

It was the only grant John’s ever got, but a very welcome one nonetheless. Within a year or so, he was able to hire his first full-time staff member.

When choosing employees, John’s not interested in how long someone was out of employment or how long ago they finished an employment scheme. “The only question we ask when someone comes in that door is: ‘Do you want to be here?’

Everything Eco Mattress does is clearly on display here at its warehouse. “This is what we do. This is all we do,” John says. “There’s nothing more than what you’re seeing.”

So if someone says ‘yes’, they want to be here, they’re in. It’s that simple.

Currently, Eco Mattress employs six people full-time, along with others who are here as participants in back-to-work schemes. The jobs all pay above minimum wage. That’s because John doesn’t want anyone “pointing the finger and saying we’re using people”.

As far as he’s concerned, it’s the other way around. “People use us to get to where they want to go and I’m perfectly happy with that,” he says.

The guys on the floor are happy to share a joke with Dublin.ie, but they don’t stop working while they talk. Apart from the baling, all the work is done by hand. The speed at which an individual bedspring can be recovered is all down to manual dexterity and how good you are with a pair of pliers.

“They work harder than people in your usual job,” John reckons. 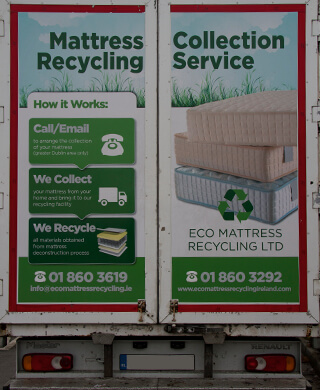 So what are the logistics of Dublin’s mattress recycling sector – of which John’s business was the first member?

“We have to get rid of 600-700 mattresses a week,” he says. “We don’t accept here from the public, we pick them up ourselves in one of our vans.

And how long does it take to reduce a mattress to its constituent parts?

“You wouldn’t want to spend more than 12 or 13 minutes,” John says. “Longer than that and I’d begin to wake up in the middle of the night! A single mattress you could do in five minutes, but we’re getting into a period of designer mattresses now.”

These are the bugbear of the business, because you get different kinds of springs – like pocket springs. This makes the job harder.

“Yes, it’s hard work, but this business has to work,” says John. He echoes that thought one more time as Dublin.ie takes its leave: “It has to work”.

Recycling your mattress with Eco Mattress

Eco Mattress offers door-to-door mattress collections around the country. They collect from Dublin’s northside Mondays, Wednesdays and Fridays. Then, they head southside on Tuesdays and Thursdays.

The evolution of Dublin’s creative spaces In recent years, Dublin has lost some of its most important creative spaces to a building boom that’s reminiscent of the Celtic Tiger era. Block T and South Studios were both closed down in 2016 with a significant loss of square footage for artists, photographers, designers and writers. Since then, The Joinery, Moxie Studios, Monster Truck and Richmond Studios have all followed suit. Our vision was to create a unique, shared workplace in Dublin city centre. In their place, however, a new generation of coworking spaces have come along. And many of them are aimed specifically at servicin

If you live in Dublin, it’s almost impossible not to be aware of the shortage of affordable housing. If you haven’t joined the back of a long queue to view a property in recent years, chances are you know a lot of people that have. And for many the consequences can be far worse; about 140 people sleep rough every night, there are some 3,000 homeless who are dependent on hotels and B&Bs, and a further 100,000 are on social housing waiting lists. It’s something that’s garnered a lot of media & governmental attention, and often the solutions proffered are quite grandiose; build up and build quickly. As a nation, we tend to have a penchant for the new when it comes to housing. While that may be a part of the solution, it’s certainly not the only approach. In every corner of this city, there are spaces going to waste.