Fergus O’Neill is the graphic designer responsible for the “Feck It, Sure It’s Grand” line of products.

He also created a series of prints depicting 20th century Dublin landmarks, such as the Poolbeg electricity station and the now-demolished concrete silos at Boland’s Mill. You may have seen some of his work in Dublin’s Jam Art Factory.

Fergus studied visual communication at Dún Laoghaire College of Art and Design – now IADT – and works from a shed in Irishtown. Dublin.ie sat down with him to find out more. He tells us about his work and some of the local landmarks that inspire it.

In conversation with Fergus O’Neill

I’m from Rosemount in Dundrum – a collection of two greens of terraced council houses. I used to get the bus into town with my mam and we’d go shopping for school shoes up in Boyers.

I used to love going around town like that as a kid. Being brought around by the hand. That Dublin, back then, is now like something from 200 years ago. It’s totally mad.

Keep Going, Sure It’s Grand. That could be the motto of the Irish.

We used to wait for the bus down on Hawkins Street. And the buses with all the smog down there. It’s just amazing that it’s only 30 years ago. It’s another world away.

And even as a kid, I marvelled at Boland’s Mill. Like, all the bits and bobs that were sticking out of it. There were all kinds of chutes linking one part of the silo to another part and there were all the gangways up really high and it was just a marvellous thing to look at. And now, sadly, the best part of it – the concrete silo – is gone. 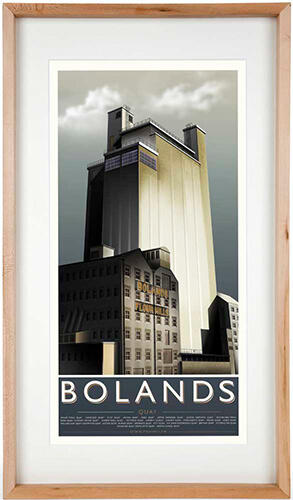 [Plunkett Tower] was the last tower that came down in October 2015. So it almost made it to 2016. It didn’t even make it to see the centenary.

And I thought it was very poignant that the project was undertaken in 1966 and it was kind of like Ireland embracing modernity and saying: “Look at us, we’re able to build this city outside of the city”. That was the idea.

And they just bussed all of those people out from the tenements and left them on their own. I thought it was very, very poignant, obviously, in that all of the towers were named after the signatories [of the Proclamation of the Irish republic]. 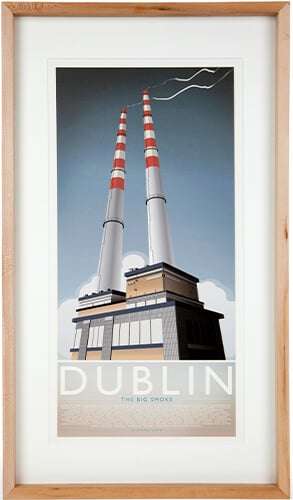 An Irish take on “Keep Calm and Carry On”

You could say I translated it into Irish. Keep Going, Sure It’s Grand. That could be the motto of the Irish.

And even as a kid, I marvelled at Boland’s Mill.

Some people took great offence to it, you know? Because they saw it as the feckless Irish.

Diarmuid Ferriter just destroyed it – said what typified this attitude in Ireland is this poxy apron. It was really nasty. I was furious! My blood was boiling and I was like: “I’m going to find him”. I just couldn’t at the time. 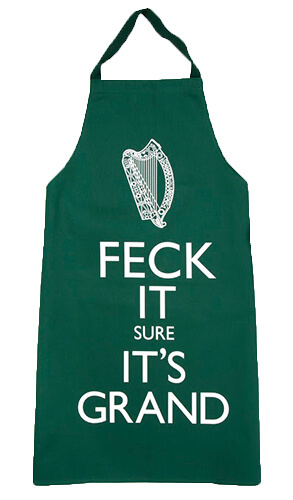 What’s next for Fergus?

I’ve done the water tower in UCD. A dodecahedron on top of a big pentagonal pillar. When I started looking at it, what’s really cool about it, is it won the inaugural Irish Concrete Awards in 1979.

It was built by John Paul Construction on-site in seven days. It’s all shutter-poured, it wasn’t prefabricated. It’s a monument to engineering in Ireland. 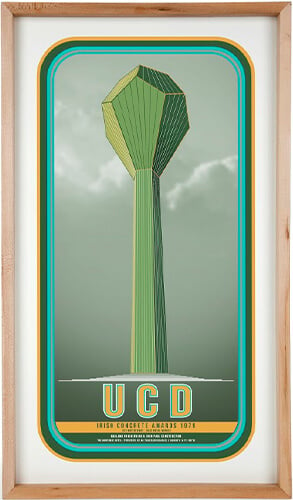 You can find Fergus O’Neill’s work on the Grand Grand website.

All images courtesy of Fergus O’Neill.

Izzy Wheels works with artists and top designers to transform wheelchairs into fashionable works of art. Today, the brand sells its wheelchair wheel covers to customers all over the world, but it all began right here in Dublin. Sisters Izzy Keane and Ailbhe Keane founded the business back in 2016 when Ailbhe was a graphic design student at Dublin’s NCAD. Today, she is the company’s Creative Director. Peter Varga spoke to Ailbhe Keane on behalf of Dublin.ie. She tells him about her path to entrepreneurship and the inspiration behind Izzy Wheels.