Choosing a school for your child is a big decision and one that weighs heavily on many parents and guardians. You may be wondering if fee-paying, private schools are the best option.

Is it really worth paying for? What should you consider before making the call? And what sort of money can you expect to pay?

How many private schools does Dublin have?

There are 34 fee-paying, private schools in Dublin. The majority of them are concentrated around the south of the city and county. Of these, 28 offer the Leaving Certificate exam, which is the standard admission test for Irish higher education institutions, including universities and colleges.

This figure includes Nord Anglia – an innovative international school with a very low pupil-teacher ratio which is aimed squarely at the children of CEOs and diplomats.

Also included are two so-called ‘grind schools’, which focus on maximising exam results. These are The Institute of Education on Leeson Street in Dublin city centre and Ashfield College in the suburb of Dundrum in south county Dublin.

Their curriculums tend to focus on study skills and are popular with students who want to repeat the Leaving Certificate.

There are also a few private schools just outside the borders of Dublin county. These include Newbridge College and grind school Leinster Senior College, which are both in Newbridge, Co. Kildare. Then there’s also Clongowes Wood College in Clane, Co. Kildare and St Gerard’s School in Bray, Co. Wicklow.

Most secondary schools in Ireland offer the Leaving Certificate. Students are awarded a certain number of “points” for each grade they receive. These are then combined to give a total number of points.

Each third-level institution in Ireland weighs up the demand for each of their courses and set a points score required for entry. Students who have met the required number of points secure a place. This system is based on course popularity, rather than difficulty.

Medicine, for instance, is a high-demand course and students need high points to get into it. Whereas, the points requirements for arts courses are usually significantly lower.

The Leaving Certificate is recognised by universities and colleges in Ireland, the UK and many other countries worldwide. However, some of Dublin’s private secondary schools offer alternatives.

The Lycée Français d’Irlande in Clonskeagh and the Nord Anglia International School in Leopardstown only offer the International Baccalaureate. A third school, St. Andrew’s in Booterstown offers a choice between the Leaving Cert and the Baccalaureate. While St. Kilian’s Deutsche Schule in Clonskeagh offers some German exams, as well as the Leaving Cert.

Ireland doesn’t publish League Tables as such, so there’s no way of directly accessing a school’s exam results. Instead, several newspapers, including The Irish Times, publish annual ‘feeder school’ lists.

These lists track the number of students from each school in the Republic of Ireland who secure a place at each of the country’s third-level institutions.

Grind schools, which do not receive any public funding, are not included in these feeder school lists. Although the Institute of Education publishes its own results and says fee-paying schools tend to perform well in these lists.

To put this in context, there are around 711 secondary schools in Ireland. So it’s safe to say that students who attend fee-paying, private schools are more likely to go on to third-level education. They are also more likely to secure a place in competitive, in-demand university courses – as well as places in teacher training colleges and the Royal College of Surgeons. 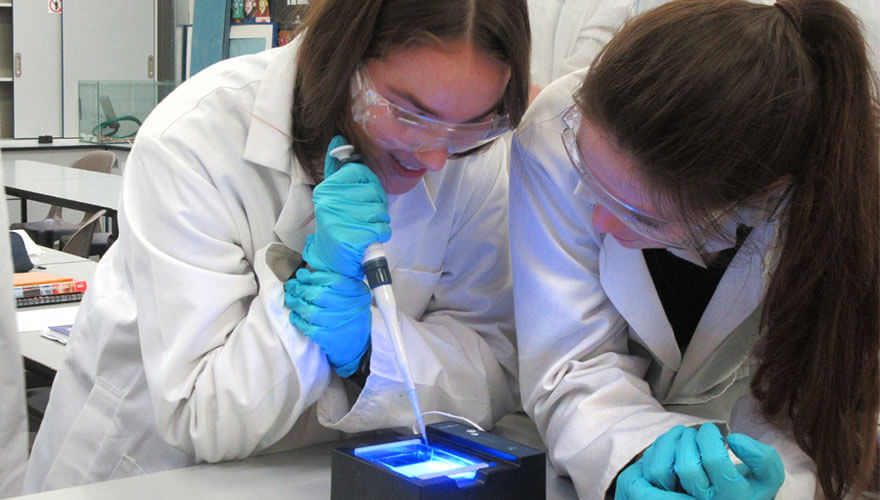 Pupils of St. Andrew’s on a visit to Amgen biopharmaceutical company.

The top private schools in Dublin

20 of Dublin’s private secondary schools feature among Ireland’s top 50 schools with the highest college progression rates. They include:

It’s worth noting that The Irish Times‘ rankings don’t include schools with less than 20 students sitting their exams. That’s why the likes of St. Kilian’s Deutsche Schule doesn’t feature, even though its progression rates are among the highest.

Schools that only offer the International Baccalaureate don’t appear either.

Can the feeder school lists be trusted?

Feeder lists aren’t perfect and they have their limitations. That’s because there is so much more to a school than just third-level progression rates.

For this reason, parents should also consider logging on to the Department of Education‘s website to check out whole-school evaluations and subject inspection reports.

This will offer a more rounded view of each school’s additional learning supports, extracurricular offerings, religious ethos and more. It’s also strongly advised to attend an open day if possible.

The feeder school lists don’t measure the number of students going on to study apprenticeships and further education courses either. However, they do tell us about one all-important metric: the relative academic performance of schools.

Irish Higher Education Institutions only admit students on the basis of Leaving Cert results – with the exception of a couple of courses where portfolios are also taken into account. So these lists provide solid guidance and a great starting point for parents who want to assess both public and private secondary schools.

What other factors should be considered?

When checking out Irish schools, here are some variables worth asking about.

Extracurricular activities: Does the school offer a wide range of sports and social opportunities? Is it all rugby or can your child indulge in drama, music, art, debating and chess? Are there initiatives to promote positive mental health and to prevent bullying?

Subject choice and class size: Ask about the subject’s your child is interested in. Do they teach physics, classics, art and music? What languages do they offer? Will your child have a choice here? Ask the school what its average class size is. This should be smaller in private schools than in non-fee-paying schools.

Religion and sexuality: Most Irish secondary schools are Catholic and opting out of religion can be challenging. One fee-paying Catholic school, Belvedere College, comes from the Jesuit tradition, but is more focused on social justice and inclusion than on conservative religious positions. However, most schools say they are inclusive, but it’s worth asking what their relationship and sexuality programme is like. Ask if outside agencies come into the school too.

Gender: Of Dublin’s private secondary schools, 12 are all-girls, 10 are all-boys and 12 are co-educational. Dublin’s fee-paying, co-ed schools are less likely to be Catholic. Research on the academic merits of fee-paying and single-sex schools is mixed, but there is evidence that co-education provides young people with better social preparation.

Here is a small selection of the minimum annual fees you can expect to pay at some of Dublin’s private secondary schools:

New to Dublin? Check out our comprehensive guide to the Irish school system.

14 Henrietta Street presents Teatime Talks, a series of talks inspired by the history and people of 14 Henrietta Street. Jeanette Lowe, a photographic artist, talks about her work recording communities in inner-city Dublin and her ongoing projects Village in the City and Demolishing Dublin. Jeanette will show some of her images from Pearse House. This public housing complex was built in the 1930’s by Herbert Simms in response to the housing crisis at the time. Pearse House is still home to many families who can trace their origins back to the site for many generations. This talk wil

As part of the State’s Decade of Centenaries programme of commemorative events, the Military History Society of Ireland and the Military Archives will jointly host a two-day history conference examining the military aspects of the Irish Civil War on Friday 23rd and Saturday 24th September 2022. The conference will take place in Cathal Brugha Barracks, Rathmines, Dublin 6. This will be in-person attendance event, but numbers are limited by the capacity of the auditorium. Ticket ordering via Eventbrite will be available from 10.00 am on Friday 2nd September and will cost €17 per day’s a

The seventeenth edition of Culture Night Dublin will take place on Friday, 23 September 2022. The programme of events features an exciting programme of cultural discovery across Dublin, with the usual myriad of fantastic events and activities. A massive thank you to Dublin City Council and The Arts Council for their continued work in making sure that Culture Night Dublin happens each year and grá mór to the artists and organisations who are once again gearing up in preparation for the 2022 version on 23 September.