Three of them are purpose-built; the buildings have always been museums: that’s the Natural History Museum on Merrion Street, the Archaeology Museum on Kildare Street and the Museum of Country Life in Castlebar, Co Mayo. The fourth site, Collins Barracks – which accommodates the Museum of Decorative Arts and History – only stopped being a barracks in 1997. At its heart is Clarke Square. On the walls of the square are a series of painted signs which mark out its width in paces – from 0 to 100: testament to the couple of centuries during which this space was used by soldiers for the purpose of square-bashing.

So it’s quick march, left-right, left-right to the café to meet Audrey Whitty, Keeper of the Art and Industrial Division. She’s in charge of all the collections and exhibitions here. “What sort of stuff is actually in these museums of ours?”, we ask her. “It’s the portable heritage of Ireland”, she says, “anything you can carry. The collections genuinely represent what Irish culture is. It’s basically about your typical man and woman either in contemporary times or historical times and what they produced”.

It’s the portable heritage of Ireland. Anything you can carry

Among the things we produced, as the Soldiers and Chiefs exhibition makes clear, was a lot of soldiers – yes, them again. The exhibition is an engrossing look at the military heritage of Ireland and the Irish. A De Havilland Vampire jet in Irish Air Corps colours hangs from the ceiling. On a grey Tuesday morning, it was packing the school kids in. And as a result of their visit, how much better informed than their parents they’ll be. Now they’ll know about the hugely important role played by Irish soldiers in the army of the British Empire – about the 59 Victoria Crosses awarded to Irish men for their part in quelling the Indian Mutiny, for instance. 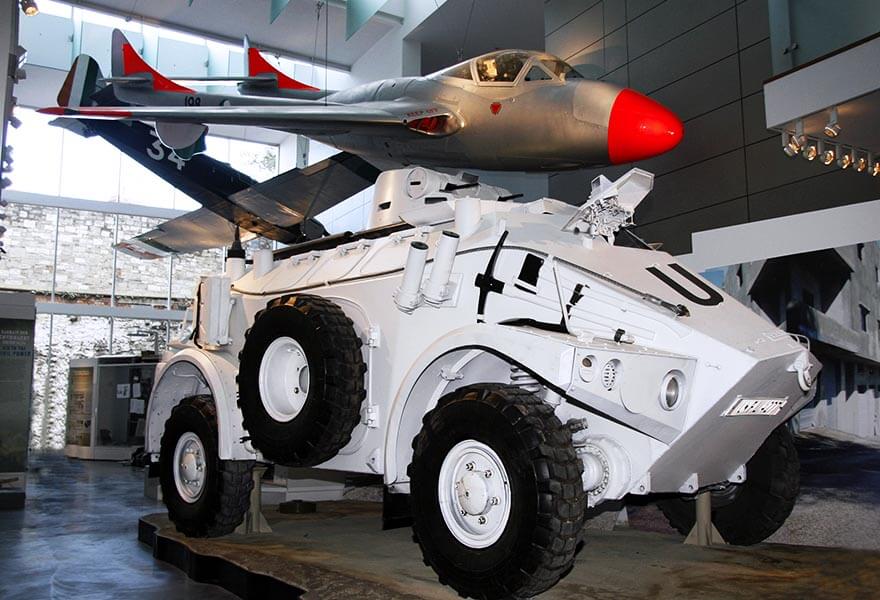 They’ll know much more about the intricacies of the Irish War of Independence and the Civil War, too. Check-out the tiny gun that Michael Collins gave to Erskine Childers, the same gun, the possession of which, was the pretext for Childers’ execution by the Free State. The exhibition is contentious, surprisingly so. But the scholarship that makes this possible is evident at every turn. And it’s exciting to have your ideas of the Irish nation undergo all sorts of subtle changes in the course of a single visit.

The collections genuinely represent what Irish culture is

We ask Audrey what her favourite exhibit is. With half a million artefacts we were expecting a bit of umming and ahhing. Not a bit of it: “the Fonthill vase”, she says, without a moment’s hesitation. “It’s the most important object in Collins Barracks. It’s the earliest piece of documented Chinese porcelain to have arrived in Europe. It dates to the turn of the 14th century, and it was in many royal collections, and throughout the centuries it has an incredible history of travel, and it’s a stunningly beautiful object, and it really is the meeting of Asia and Europe in terms of the story of the Middle Ages”. 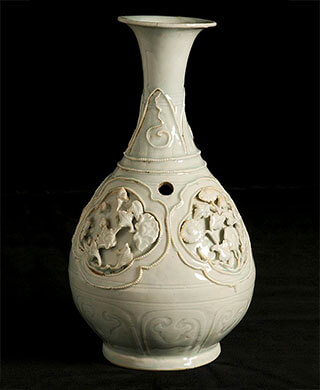 The Fonthill vase.  Image courtesy of the NMI.

Look at it a bit more in its special case – in a gallery you might have to yourself – and you can begin to understand why all those kings, not to mention the Victoria and Albert Museum in London, wanted it so badly. As you might guess, Audrey is an authority on porcelain – and on glass too. The museum’s collection of Waterford glass, she says, is “the finest in the world”. But did you know that the Waterford factory ceased production in 1851? And that it was brought back to life after the Second World War with the help of two Czechs, Charles Bacik (that’s Senator Ivana’s grandfather, by the way) and Miroslav Havel – linking the brand’s current production with the great Bohemian glass-making tradition? Well, we know now.

The museum’s fascinating The Way We Wore exhibition of costumes is full of other examples of various products for which Ireland is famous, from bog-oak jewellery to tweed. And for Ireland’s answer to Yves Saint Laurent, check-out the super-glamourous clothes on exhibit in the room devoted to designer Ib Jorgensen.

Meanwhile, back to the guns – and Erskine Childers. In 1914, Childers famously used his own yacht – the Asgard – to import 900 rifles into Ireland for use by the Irish Volunteers. And if you visit the old gymnasium building, you can see that very yacht, as well as an example of the gun in question, a Mauser. Perhaps because of all the exposed wood, the room smells very much like the interior of a church. It’s certainly a good place to contemplate some of the holy relics of Ireland’s journey towards nationhood.

The exhibition is contentious, surprisingly so

Next stop, the Proclaiming a Republic exhibition in the old riding school building (it’s right next door to the gym). Devoted to the 1916 Rising, it’s proving a hit with some French visitors. They’re standing together in front of a signed photo of some guy wearing a hat. He looks like a film star from the black-and-white era. The caption tells us that his name was Lieutenant John Lowe and that he was present when Pádraig Pearse surrendered to British Brigadier-General William Lowe, John’s father. It was John who escorted Pearse on his way to prison, extending the journey so that Pearse would have time to finish writing a letter. Later, Lowe went to Hollywood to become, yes, a film star. “Il est beau”, says one of the French girls. 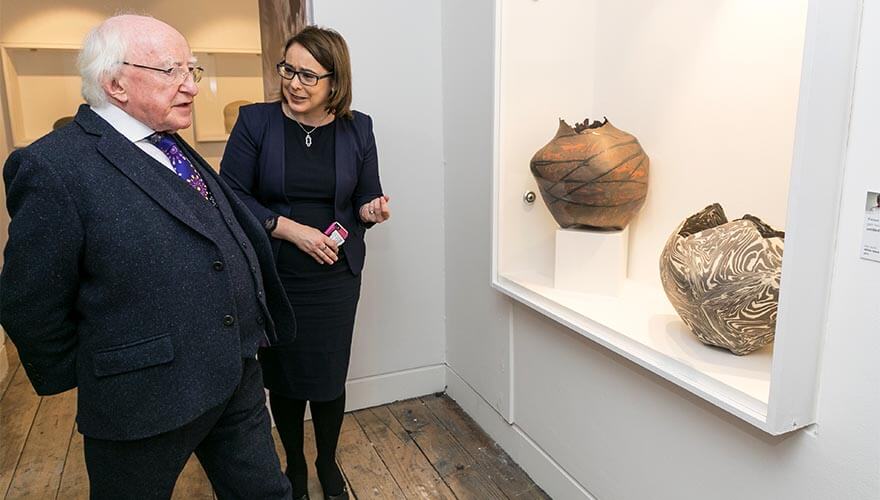 How clever of this exhibition’s curators to bring that little story to light, we thought. “We had the first instance of a museum collecting contemporary history because we literally started collecting in 1916. The first acquisition came in in 1917. That was a world first”.

One of the museum’s most visited exhibitions was Portrait of a Century. Kim Haughton photographed 100 people, one born in each year since the foundation of the State. Amongst them, you’ll find a celebrity chef, a famous footballer, a Guinness heir, and of course, a soldier. It’s a wonderfully inclusive portrait of Ireland that once more will change your ideas of what that word “Ireland” means.

But on the subject of curation, how does Audrey feel about the current use of that word ‘curate’? A word which, nowadays, can be applied to anything from reading lists and DJ sets to make-up colours and heirloom lettuces. Audrey is well-deserving of the last word here: “I absolutely hate it! It doesn’t make sense. The word originally meant ‘to take care of’. It was about posterity. If you’re a National Museum curator, you’re acquiring for a national collection. That’s the most important basic premise. Ultimately, that’s why we’re all here: for people to come through the door and hopefully enjoy what they see and take something away with them by way of inspiration”.

It’s a fine brisk November morning when Dublin.ie meets up with Ed Boden at his office in Blessington Basin, the north side’s secret park. But we are not here to talk about Ed’s job as chief of parks today. No, we are talking about another curious string to Ed’s professional bow. Curious, quirky and colourful. Because Ed is the Dublin City Council vexillologist. “He’s the what?” I hear you say. Well join the club, I said it myself. But if you are stuck for the answer, we’ll give you a clue. A clue that comes from a recent Nobel Laureate who told us “The answer my friend is blowing in the wind, the answer is blowing in the wind.” Flags. It’s unlikely Dy

Jane Jacobs, the doyenne of urban planning, believed that the success of any city owed a lot to the “intricacy of pavement use, bringing with it a constant succession of eyes”. She wrote, in The Death and Life of Great American Cities, “There must be eyes upon the street, eyes belonging to those we might call the natural proprietors of the street. The buildings on a street equipped to handle strangers, and to ensure the safety of both residents and strangers, must be oriented to the street. They cannot turn their backs or blank sides on it and leave it blind.” But what happens when the residents and strangers are themselves blind to their surroundin