You could probably place a safe bet that one or two of them might be no stranger to a bit of mischief in their day. So what they are up to takes you a little bit by surprise. If someone outside the gate told you that these guys were making salad bowls inside the yard, “get up the yard!” would be your likely response. But this is the Yard Crew, part of the Solas Project.

The Solas Project’s mission is to “… place a high value on character, motivation and self-worth. Through programmes of learning, mentoring, personal and social development, we support young people to create a brighter future for themselves and their communities.”

The Irish Design Shop on Drury Street also sells our bowls. And we do markets as well

Derek Murphy, who runs the Yard Crew along with some valued volunteers, tells Dublin.ie that the whole project was started about 10 years ago by a Finnish woman who married a local and was taken aback by the lack of after-care services for schools in Ireland, in particular where she was living in Dublin 8. “She married a local guy and saw a need for after-school care that wasn’t there and that would have been commonplace in Finland,” Derek says.

The Yard Crew itself has been going for three years and it involves young adults from ages 16-24, coming two days a week over a 16-week programme. Derek and a number of volunteers teach the kids how to craft handmade wooden items, everything from bowls and bottle openers to pens, as well as made-to-order items such as rocking horses and candle holders. You can buy these objects at the Yard Crew online shop. “The Irish Design Shop on Drury Street also sells our bowls. And we do markets as well. They are always a big deal coming up to Christmas,” he says. 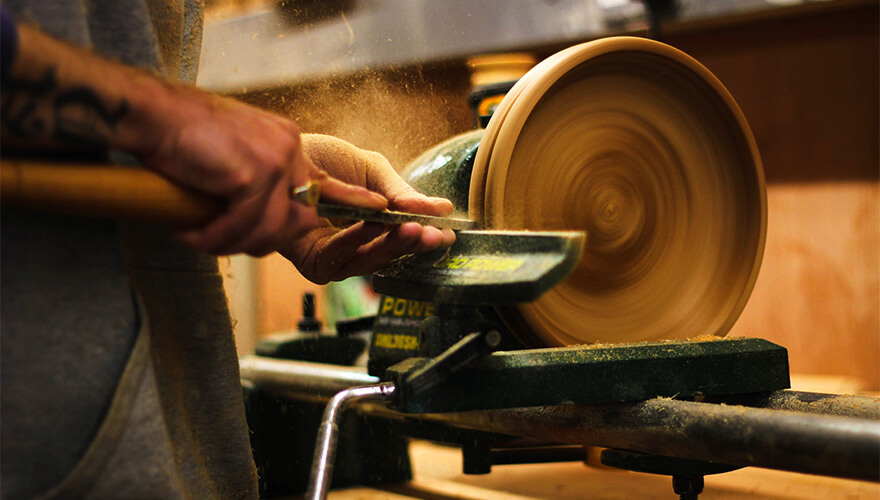 “The guys come in with more or less no experience of woodturning and we are selling their bowls, high quality bowls, a few months later,” Derek says proudly. “But when we have a stall we are not just selling the goods, we are selling the Solas Project, The Yard Crew, the whole idea behind it,” he adds. Derek accepts the generalisation that these kids had for the most part not really engaged with the school system. “Yeah, I think you could say the mainstream stuff has not worked,” he says.

They recently started paying the guys at the Yard Crew to boost the attractiveness of their project. “It’s minimum wage, it’s two days a week and some of these guys would not qualify for social welfare. So it’s an added incentive.” Previously the attendance would have been up and down so they weighed it all up and decided that paying a wage was the best way forward. Derek explains that the guys are interviewed just like for a normal job. “These guys might not have had any employment before so they are treated like any other employee: ‘guys you got to be here on time, you work as expected, you listen to direction. And you show respect to the rest of the guys here who are volunteers and are giving their time and expertise.”

The kids are not left with any illusions that they will be out finding jobs turning bowls the minute they leave the course. “But we tell them you will have a quality three months’ work behind you and if anyone wants a reference, I will give it. But I am honest because if I am asked would I recommend a certain person, well the Project’s reputation is at stake. We are talking about the Project’s name and I tell the guys they have to respect that. That’s kind of instilled in them at the start,” he says.

As a ‘social enterprise’, Derek acknowledges that it can be tough reconciling the ‘social’ with the ‘enterprise’. “With the interview process we have to balance the best candidates with the most needy. Yeah, that’s a tough one,” he says. He says after the recent interview process, they took six but they could have taken 12. “It’s hard cos you are looking at the community side and you know you want to give every single one help but for some of them, you know, maybe the timing is not right. Maybe things are just too chaotic at home so they cannot totally focus on the project.” 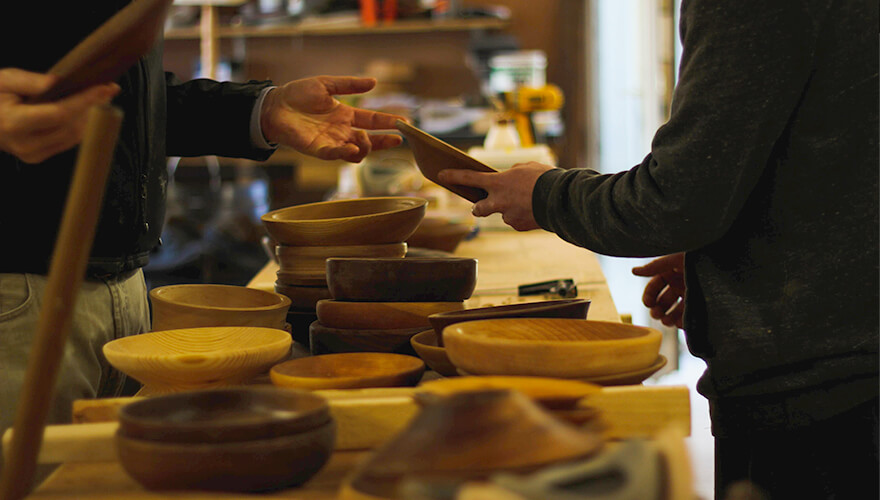 Derek admits to being awestruck about how some of the guys take to it so quickly. “Honestly you see it going from a block of wood to something fantastic,” he says, adding: “I have worked in places where you would not get the work ethic that some of these guys have. There are a couple of guys here I would employ in any job given the right training and stuff. They have an honesty about them that in a normal work place you would rarely see.”

Curiously Derek got into community work while living a prosperous life as an IT guy over in the States. “I worked in Intel for 20 years. I worked in America for over two years. And I was living in an affluent area where everything was nice and shiny. But in the last 6-8 months I started to volunteer in the local what you’d call a ‘soup kitchen’, although it was a bit more than that.” Families would  come in to the project to get their meals and clothes. “It had a huge effect on me. It was only a mile and a half from where I was living but it was over a hill. You didn’t see it,” he says.

If the project brought you up, you would only put that energy, that high, back in.

Within days of returning to Ireland he was volunteering with Solas Project. “Then there was a redundancy opportunity,” he said. “When a job position came up here and I said to my wife ‘check this out’, she said ‘ you kind of have to, don’t you!’. So I went for it. My wife said a long time ago, and not about Intel in particular, but work of that nature, and shift work, that it used to suck the life out of me. But the one day in the Solas project would bring it back into me,” he said. 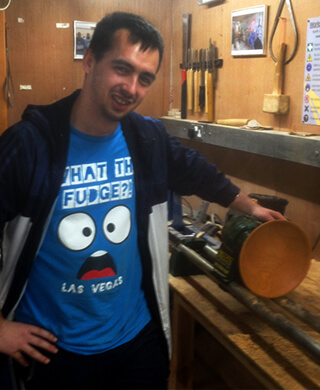 Derek said he had to question his own motivation. “The high I would get leaving here working with certain kids was to a point that I had to question myself whether I was doing this for the project or doing it for me.” It seems he arrived at a judicious answer. “If the project brought you up, you would only put that energy, that high, back in.”

Talking to the young guys at the project, all seemed to share Derek’s enthusiasm. What’s more they appreciated how Solas Project used its network of contacts to help get them jobs or onto other courses. One of the lads, Gareth, summed up the project with a neat endorsement. “They are all genuinely sound. They let you have a laugh to a certain limit. And you actually enjoy coming around.“

Imagine if Dublin had an instrument panel: a set of gauges and graphs that revealed to its residents the precise current state of their home town. Professor Rob Kitchin and his team at Maynooth did exactly that. And they built it, online. It’s called Dublin Dashboard. Dublin.ie: What’s on Dashboard right now that the ordinary person might be interested in? Robin Kitchen (RK): Probably the real time page where you can see how many spaces there are in the car parks or what the sound levels are or what the pollution levels are or how many bikes ar

The room is bustling with heated, animated conversation. There’s around 50 people gathered in three groups focusing on different areas of the problem in hand. The groups sit in circles, debating, brainstorming. You hear snippets here and there: “A PR launch in the Mansion House or Smock Alley?…Overcoming the stigma of being in care…The trauma of a kid in care turning 18 and suddenly just being thrown out onto the street?…Think in images.” We’re hearing the language of political engagement. Of lobbying. Of activism.

As Professor Luke O’Neill discovered recently, when you become a fellow of the extremely exclusive and august science club that is the Royal Society, you have to sign their book. Previous signatories include Newton, Boyle, Freud and Einstein (Oh, and superstar astrophysicist Brian Cox). Which makes the process rather nerve-wracking, according to O’Neill, a biochemist at Dublin’s Trinity Biomedical Sciences Institute and one of the world’s leading immunologists. Luke O’Neill: There’s a practice, you don’t want to smudge your name! Dublin.ie: That’s quite some company you’re keeping there - but what do all you science guys have in common? Luke O’Neill: Science is trying to find stuff out. You can call it exploration, you can call it pioneering, frontier stuff because it’s all about making discoveries. We are explorers, that’s our job, that’s what attracted me to it. I wanted to see something nobody’s seen before. And in my case, luckily enough in my lab we probably had three big discoveries that made a big difference: we explored the immune system and saw things there for the first time. The next step is there’s a whole new pathway or process discovered - and of course the thrill would be if that was a dysfunction or a disease because then you might try and correct it. Once you find the enemy, you might be able to design a new medicine that might beat it. Dublin.ie: So you’re a biochemist and not an ordinary one? Luke O’Neill: I’m a bit of a schizophrenic! I was interested in chemistry anyway and biochemistry is chemistry writ large: if you want to understand something you’ve got to understand the chemical basis for things - and biochemistry is the basis for life. If we understand the chemicals of life wouldn’t that be a thrilling thing? One comparison is with genetics: geneticists don’t really go beyond the genes, you know – and I want to know the real fundamentals. Like genes makes proteins, but what do they do? I was always obsessed with true mechanism – the underlying mechanism, the very basics of how things work. I’ve always been obsessed with molecular things in a sense.