As Professor Luke O’Neill discovered, when you become a fellow of the extremely exclusive and august science club that is the Royal Society, you have to sign their book.

Previous signatories include Newton, Boyle, Freud and Einstein (Oh, and superstar astrophysicist Brian Cox). Which makes the process rather nerve-wracking, according to O’Neill, a biochemist at Dublin’s Trinity Biomedical Sciences Institute and one of the world’s leading immunologists.

Luke O’Neill: There’s a practice, you don’t want to smudge your name!

Dublin.ie: That’s quite some company you’re keeping there – but what do all you science guys have in common?
Luke O’Neill: Science is trying to find stuff out. You can call it exploration, you can call it pioneering, frontier stuff because it’s all about making discoveries. We are explorers, that’s our job, that’s what attracted me to it. I wanted to see something nobody’s seen before. And in my case, luckily enough in my lab we probably had three big discoveries that made a big difference: we explored the immune system and saw things there for the first time.

The next step is there’s a whole new pathway or process discovered – and of course the thrill would be if that was a dysfunction or a disease because then you might try and correct it. Once you find the enemy, you might be able to design a new medicine that might beat it. 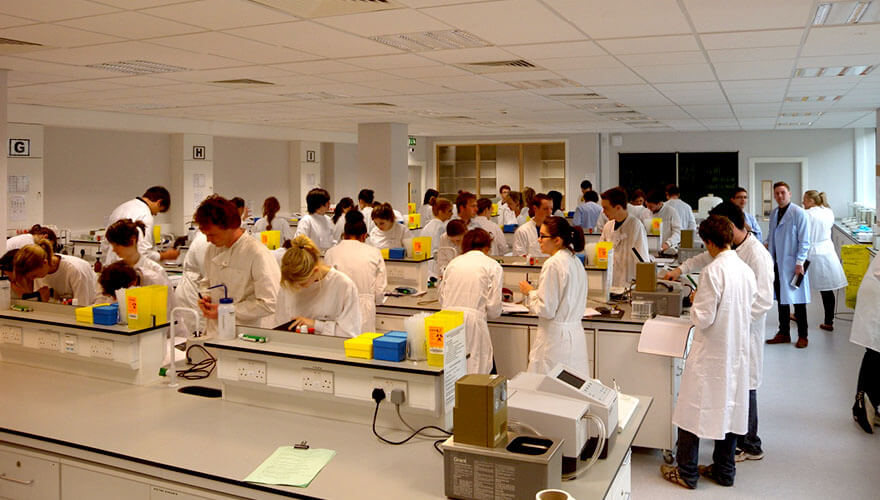 Students at work in the research laboratory, TBSI

One comparison is with genetics: geneticists don’t really go beyond the genes, you know – and I want to know the real fundamentals. Like genes makes proteins, but what do they do? I was always obsessed with true mechanism – the underlying mechanism, the very basics of how things work. I’ve always been obsessed with molecular things in a sense.

Dublin.ie: Why immunology?
Luke O’Neill: I began to take an interest in inflammation as a process in the body. When you have an injury say or an infection you have this inflammatory response – and that got my imagination: what’s going on there, what are the cells, the molecules, the regulators of inflammation? Now obviously inflammation’s a very important part of the immune system because you need it to help you fight infection, for example.

But then it gets even better, because it turns out that in many diseases this system goes awry and you get really bad, chronic inflammation attacking your own tissues. The first disease I was into was Crohn’s disease, an inflammatory bowel disease, then I did my PhD in arthritis and then that really got my interest I suppose – my whole career has been about trying to unravel the molecules in those diseases…

Dublin.ie: It’s about regulating the body’s inflammatory response?
Luke O’Neill: Take a disease like arthritis, for instance – for some reason your own inflammatory process goes crazy and begins to attack your joints and they get red and swollen and sore – just like there’s an infection there – and there isn’t. And that’s where the word ‘auto-immunity’ comes in – because your immune system turns on its own tissues. We’re trying to find out why.

Dublin.ie: Is Dublin a good place to be doing immunology?
Luke O’Neill: Oh yeah absolutely! But it wasn’t for a long time – Irish research was pretty poor up to the early 2000s.

Dublin.ie: And then what happened?
Luke O’Neill: SFI was invented – Science Foundation Ireland – and suddenly we’d money. Now Ireland’s in the premier league for immunology, for example, simply because money was put into it, and we managed to attract really good immunologists. And then we’ve been able to educate the kids to become immunologists which is very important: most of my people I’ve had in my lab are Irish from Dublin who’ve done PhDs with me. I couldn’t have done that unless I had money to fund my research, so SFI were key to all this and that was the turning point in many ways.

In immunology we’re now third in the world by some metrics – and that’s mainly based in Dublin because most of the activity’s here. We’ve gone up the league tables in several areas – microbiology, nanotech – there’s certain areas of science that Ireland’s really delivering internationally now. 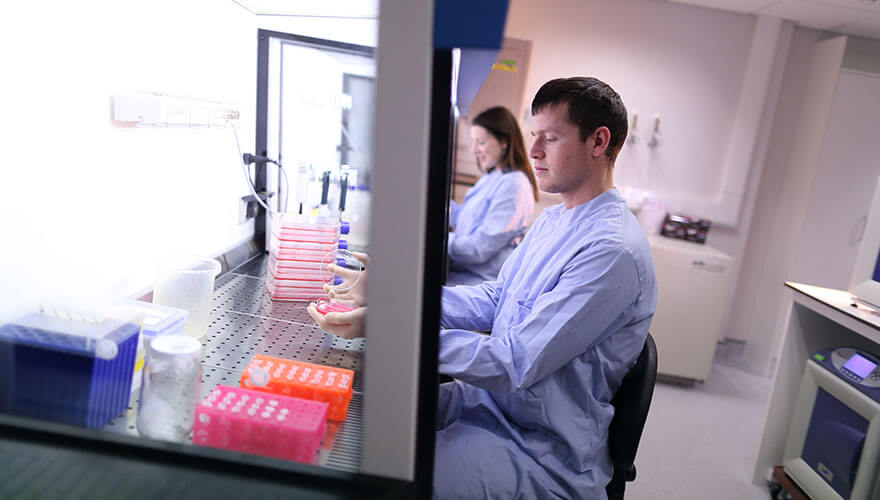 Dublin.ie: Does education in general get enough emphasis here?
Luke O’Neill: I think we’re doing better than in the UK, for instance, because our range of subjects stays broader up to an older age – most kids are exposed to science up to the age of 15, 16, at a minimum, and the UK isn’t like that. So I think we can give a big thumbs up to some extent to what we’re doing here.

We must make our general public scientifically literate to some extent because there’s big things coming down the track that science is driving – and why wouldn’t people have their opinion on them and make decisions based on at least some knowledge of these things? That’s one of the reasons for education.

Dublin.ie: Big things?
Luke O’Neill: Climate change: we all might drown! Medicine! When you talk about things like IVF, reproductive medicine, there’s changes coming there, all kinds of ethical things coming up all the time.

You want to have as well educated a populace as you can get. Because, one, they can have an opinion on things when they’re very serious – and that can come into democracy and who you vote for, for example. But secondly because every aspect of society needs an educated work force to allow for growth and development – the whole history of progress is educational in a way. Without education you wouldn’t have had the scientists, you wouldn’t have had the engineers, the business people – all that stuff needs education.

In 1930, 30% of the world was illiterate, now 90% are literate. Less wars, less deaths, less destruction, and the reason for all of this is actually education in one way – because again, if you educate the workforce they’re more productive and increased productivity means more affluence and less poverty. 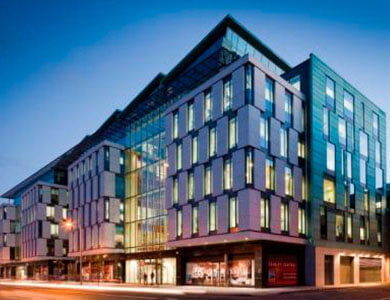 Dublin.ie: We’re sitting in a café on Pearse Street, across the way from Pádraig Pearse’s family home: do you see a connection between the city’s history and medical research?
Luke O’Neill: Certainly: the TBSi is built close to the site of the slums and tenements where hundreds would have died from TB, for instance, not so long ago. There’s certainly been a revolution there. And in medical history itself, Dublin and Trinity has a long tradition of discoveries and advances – from the popularisation of the stethoscope to the discovery of a drug to treat leprosy.

Dublin.ie: And while we’re on the subject of Dublin, please give us your completely non-partisan view as to which author has given us the best description of a chemist in literature?
Luke O’Neill: James Joyce’s description of Sweny’s in Ulysses.
Dublin.ie: ..is the right answer!

Thanks to Professor Luke O’Neill and Katie Byrne at TCD.

Medicine in Trinity College is known as one of the most difficult courses to get into in Ireland. These students will play a major role in the future of healthcare, in Ireland and worldwide. Someday your life might just depend on one. During placement at hospital, some of these students will experience things that most of us will never see. They’ll witness life-changing moments and hear about difficult upbringings and tragic back- stories. “Sometimes I’ve taken a step back and thought, oh I’m very lucky to never have had any of those issues” says Aisling Hickey, a Trinity medicine student. Aisling is currently in fourth year of the course and on placement.

What sets Europe’s largest culinary school apart? The School of Culinary Arts, DIT Cathal Brugha Street has been blazing trails for almost 80 years. Dublin.ie met with the Head and Assistant Head of the school, Dr Frank Cullen and Mike J. O Connor to find out what sets Cathal Brugha Street apart and what the future and the move to DIT’s new centralised campus at Grangegorman hold. The School opened its doors in June 1941 as Saint Mary’s College of Domestic Science. In the 1950s the college changed to cater to the needs of a growing tourism industry, becoming the Dubl