Wrapped from head to toe against the hostile elements, surrounded by a riot of colour which cuts a sharp contrast with the grey day, meet the flower sellers of Grafton Street.

They say the ladies are “the heart and soul of Grafton Street” and what helps save the road from becoming just another English high street. You’ll find these ladies bringing both wit and colour to the corners of Chatham, Harry and Duke Streets.

Tina Kelly tells us she’s been selling flowers all her life. Starting off aged 12 helping her mother when Grafton Street still had two-way traffic. She has seen a lot come and go from her perch on Duke Street.

Tina tells Dublin.ie that one time she even met The Duke himself. “Yeah, I met John Wayne. Sure I met them all!” she adds. “Sean Connery… I was talking away to him. Liam Neeson, Pierce Brosnan, Lisa Stanfield. I met an awful lot of them. And sure Eric Clapton, well I was talking to him on the street for nearly two hours and I hadn’t a clue who he was.”

Yeah, I met John Wayne. Sure I met them all!

A natural born storyteller, you can tell Tina enjoys the banter that comes with the trade. There’s lots of first name usage. Many of the customers are obviously regulars.

For decades, shoppers have been able to find her on this same spot. Grafton Street flower traders pass their licenced pitches down through the generations.

It all started with her grandmother, then she continued on the trade after her mother. And now her daughter sells flowers here too. For years, her sister-in-law Susanne Kelly also had a spot on the corner of Harry Street under the watchful eye of Phil Lynott’s bronze statue.

The Kelly name is synonymous with flowers on Grafton Street going way back, she previously told Dublin.ie. Tina has a picture of her grandmother selling flowers in the 1940s. And Tina’s mother, Theresa, was such a cherished Grafton Street figure that when she died back in 2014, her white coffin, carried in a glass hearse drawn by two plumed white horses, was given special permission to proceed down Grafton Street.

“Lunch-time shoppers stood in silence as the hearse paused at the junction with Harry Street and a lone piper played a final lament,” The Irish Independent reported. “There were so many wreaths for the former flower seller that a second, heavily laden, horse-drawn show-cart had to pull them behind the hearse.”

The paper continued: “A huge spray of red roses covered the coffin and the family wreaths included one in the shape of her favourite tipple – a Guinness bottle – and others in the shape of a pack of cigarettes, a heart, a book, a chair and even a butterfly”.

From bloom to bust

The Grafton Street flower sellers really felt the pinch during Ireland’s years of austerity. “Sure no one had the money,” Tina says. “When times are tough, a chicken is better than a bunch of flowers no matter what way you look at it.”

During the Covid-19 lockdown, “it was desperate” and everyone was overjoyed to see their return – even though business suffered because of a reduction in footfall about town. So how’s business now? People are returning to their offices, but the cost of living crisis is starting to bite too. “It’s alright,” says Tina. “You can see it hitting. People are worried.”

Despite the wide range of exotic flowers available, the best sellers remain roses, lilies, tulips and bouquets. “It all depends on the time of the year,” says Tina. “At Christmas, it’s lilies. In the summer, it’s peony roses and hydrangeas.”

And what about Valentine’s Day? She’s not as enthusiastic about the flower-filled holiday as one would expect. “Valentine’s Day, I have to say it’s good, but the stuff goes up,” Tina explains. “Everything is nearly double.” 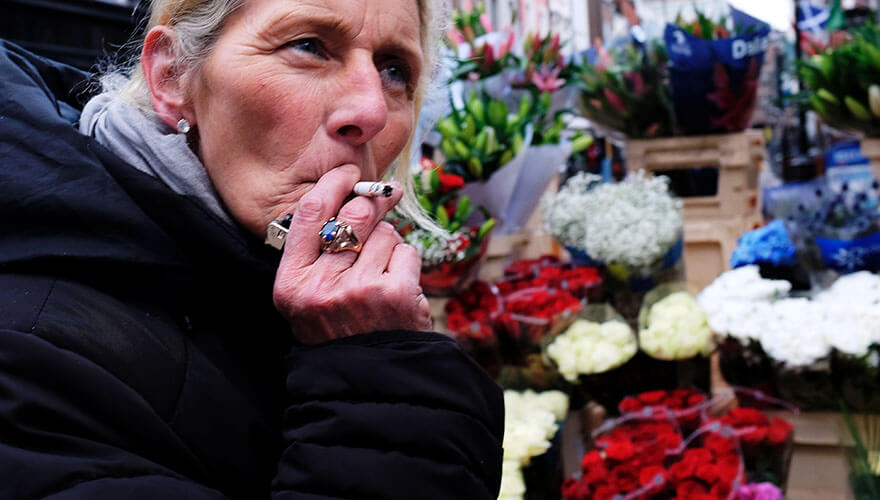 Tina Kelly on the corner of Duke Street.  Photo by Barry Delaney

All the Grafton Street flowers come from Holland where, with current growing techniques, they can delay flowering and manipulate the market. “They can hold back the stuff and create a demand,” Tina says.

With the old Capel Street market gone, the Grafton Street flower ladies deal directly with the Dutch lorry drivers. They buy stock at auctions in Holland and then drive straight over to Dublin.

“They come in during the night; they have a warehouse here. Then the fellow comes down to us the next morning,” she says. “There’s no middleman.”

The women say they pay handsomely for their spots on Grafton Street. “It’s a good street, but you wouldn’t get away with being soft,” Tina says. The odd “drunken eejit” might try to make off with a bunch. “But if I run up the middle of the road, half my family would see me. So you catch them up there, give them a few smacks, take the flowers off them. Then ‘on your way’.”

A part of Dublin city’s culture

In 2019, there was uproar when an international real estate group who owns some commercial buildings on Grafton Street referred to the flower stands as ‘street clutter’ in a submission to Dublin City Council. It claimed the sellers were inhibiting the flow of pedestrians along the street and suggested the current set up be changed.

The Grafton Street flower sellers didn’t react well to the description – and neither didn’t the general public. In fact, there was an uproar among Dubliners and the instantaneous backlash was so significant that the company quickly withdrew the submission and apologised.

Although she is approaching the usual retirement age, Tina has no intentions of going anywhere any time soon. “We are there forever and that’s it!” she says. And the city is better off for it, because the colour, wit, warmth and banter that these women bring to Dublin’s most popular shopping street is irreplaceable.

We are there forever and that’s it!

Tina smiles as she recalls an animal rights protest outside the furriers opposite her stall. “This woman walked down – lovely looking woman in her 50s. She was real handsome. You know the way you look at someone and you say ‘she’s still lovely’. She was a beautiful looking woman… This protester comes up to her. ‘Do you know how many animals were killed to make that coat?’ the protester says. The woman turns and, quick as that, says: ‘Do you know how many animals I slept with to get it’.”

And with that, Tina turned to serve another customer.

To find out more about what makes this city so unique, read about the people and culture of Dublin.