We’re proud of our vampire writers in Dublin. And we’re right to be.

But then what happened? Was the city of their birth so thick with inspiration (Marsh’s Library, St Michan’s church, etc) that when they came to write fiction (mostly in England), vampires naturally suggested themselves as subjects. Or was there something else going on in Dublin? Something deeper?

Armed with a crucifix, a string of garlic and a dictaphone, Dublin.ie spoke to two of our leading vampire – well, vampire fiction – experts. Jarlath Killeen lectures at Trinity College and is a contributor to The Irish Journal of Gothic and Horror Studies, of which Dara Downey at Maynooth is co-editor.

Dublin.ie: Two superstar vampire writers, one city. How come?
Jarlath Killeen: These are writers who are middle-class Irish protestants. There’s a sense in which they don’t feel at home anywhere. Whether you’re talking about Dublin or London they don’t feel completely comfortable. They’re often described as in-between or hyphenated. And the vampire is a hyphenated character who’s neither living nor dead.

People who feel like they’re in-between are often attracted to gothic characters. It’s why gothic is often associated with post-colonial countries. This kind of genre has a strong appeal for writers who feel caught between two or three different kinds of identities. And the vampire is a very useful in-between figure. Think about why teenagers, for instance, are very attracted to figures like vampires: they’re neither children nor adults, so they’re caught in between these two states.

Dublin.ie: And there I was thinking vampirism were all about sex…
Dara Downey: It’s about class and it’s about power – who has it, who doesn’t, and what the people either above you (blood-sucking aristocrats) or below you (pitchfork-wielding peasants) might do to you. In other words, it’s about unequal balances of power.

Dublin.ie: What about Dublin?
Dara Downey: Dublin, especially in the nineteenth century, was neither one thing nor the other. To the English, or even just the Protestant ascendancy with the means to get out whenever they wanted, it was a provincial backwater, perched on the ragged edge of the civilised, enlightened world. To everyone outside the Pale, Dublin seemed snooty and anglicised, hopelessly out of touch with the myths and the folk ways and the culture of the rest of the country. 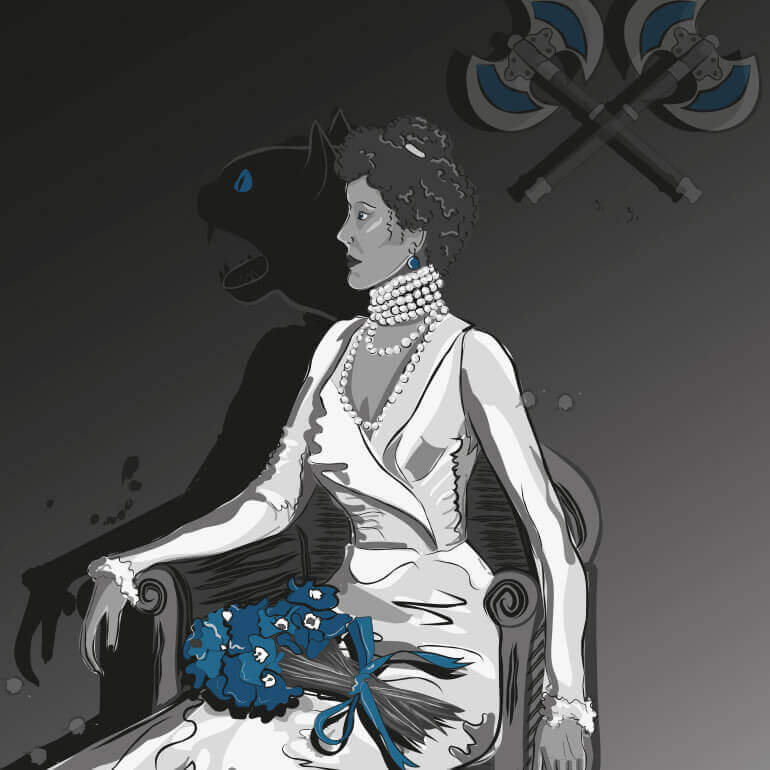 Carmilla, by Sheridan Le Fanu, features a female vampire who can take the form of a cat. Illustration by Aoife Flynn.

You really see all this in works by people like Le Fanu and Stoker, who seem to be caught between rejecting Irish “superstition” and knowing that they couldn’t quite escape it. Their vision of Dublin and the rest of the country in the nineteenth century is of a place half-finished, apparently bustling and cosmopolitan, but hiding pockets of darkness, whether in its ill-lit streets, its corrupt judges and politicians, its creepy servants and shady criminal types, or simply the terrible secrets concealed within seemingly “respectable” families and houses.

Dublin.ie: So nothing like the Dublin of today then. Would you agree, Jarlath?
Jarlath Killeen: If you think of somewhere like Dublin, it was a capital city in an imperial system. But it’s in a country that’s supposedly underdeveloped so it’s caught between these two poles: of rural Ireland and this gigantic all-embracing empire – possibly the second capital city of the empire. So again it’s in this in-between kind of state…

Dublin.ie:…just like Dracula and Carmilla. So it does seem that there was something in the water here – or the blood.

We are lucky to live in a city where fantastic local produce is readily available, and game is no exception. Game season is well under way with venison in stores since September and grouse, pigeon and pheasant available from next week. People can often be intimidated by game. But it can be treated like any other meat. You can roast, pan-fry or braise it, just watch out for the shot! With such an abundance of options on our doorstep it would be a shame not to avail of this great resource. Dublin.ie visited some of the best places to buy game in Dublin to see what’s on offer, so that come next week you will be well equipped to cook a hearty, seasonal and local meal.

Do the vaults really contain restless spirits? St Michan’s Church is situated behind Dublin’s Four Courts on Church Street, just around the corner from the Jameson Distillery in Smithfield. It was originally founded in 1095 and is the oldest parish church on the northside of Dublin. It was rebuilt in 1685 and contains a large pipe organ, which Handel is said to have played during the first ever performance of his ‘Messiah’. The interior has changed little since Victorian times and the main church still holds mass every second Sunday, but what lies beneath is