There is a tendency, when you’re Irish, to take the celebrations of Saint Patrick’s Day for granted – until you spend it somewhere else.

A couple of years ago, I was working in London’s Canary Wharf for Saint Patrick’s Day. Looking out the window of a fifteenth-floor office, the only break of green in the glass and steel metropolis was some hastily painted inaccurate shamrocks on the windows of an empty pub across the street. With n’er a silly hat in sight, I was never more Irish than I was that day, listening to Raglan Road in my cubicle.

Growing up, St Patrick’s Day was the day to break Lent and crack open the sweet jar. A day for your granny to cut off a length of emerald green satin ribbon, and tie it in your hair. A day to have shamrock, replete with a lump of muck, pinned about your person. A day to stand on the side of the street and have sweets thrown at you from a tractor-drawn float. A day to attempt a bit of an Irish dance, or to try your hand at an old tune about leaving Ireland and coming home again.

But what does Dublin have to offer on St Patrick’s Day these days? It is not just a day; it’s a five-day festival with 30 events and over 3,000 artists. So, pace yourself.

The festival theme for 2018 is HOME; the exploration of my home, your home, our home. It is the inspiration for the artistic programme that includes a unique film commission project, street-theatre, talks, walks, spoken word, literature, music, Irish language, visual art and more.

Each year, the highlight is, of course, the St Patrick’s Festival Parade. Ireland’s leading street theatre and pageant companies have adopted the theme, Home is where the Heart is, and their magnificent creations and flamboyant performances will weave their way through the capital in spectacular fashion. 100,000 tourists will arrive in Dublin for the day itself, and 500,000 onlookers will line the route. Parade bands from far and wide will deliver dazzling rhythms and uplifting musical scores that will reverberate throughout the streets during the procession. Cheer along with the hundreds of thousands of people who make the atmosphere at the parade something to remember.

This year, for the very first time, St Patrick’s Festival has appointed an International Guest of Honour. Mark Hamill, best known for his Star Wars role as Luke Skywalker, will watch the parade from the presidential stand along with President Michael D Higgins. 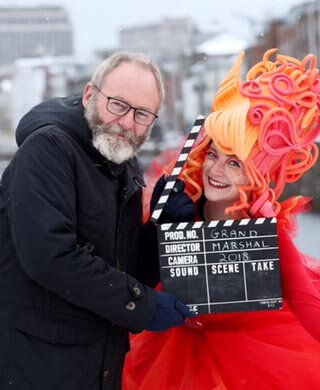 Dublin star of stage and screen, Liam Cunningham, will lead this year’s Festival Parade which will wind its way through the streets of the capital from noon. Liam is probably best known for his starring role as Davos Seaworth in the epic fantasy series Game of Thrones. The East Wall native said, “I have always been a proud Irishman and Dubliner and do my best to represent my country and city when I am abroad working. It’s a huge honour to be invited back to lead the parade on our national holiday. I’m really looking forward to being a part of it.”

If the parade itself, with its flasks of tea, finding a decent viewing spot and the giddiness of small children wanting up on your shoulders, is not for you, there are other ways to engage with the celebrations. St Patrick’s Day has become an arts festival with large-scale participatory events like; the 5k road race, for more energetic festival-goers; the Big Day Out street carnival on Merrion Square; In the Footsteps of St Patrick, walking tour led by Dublin historian Pat Liddy; or any of the other many smaller cultural events dotted around the city.

As well as expanding the programme, the footprint of the Festival has been extended to move it beyond the reach of the city centre. Fingal County Council has moved Howth’s Dublin Bay Prawn Festival to the Patrick’s Festival weekend. Celebrating the famous Dublin Bay Prawn, Howth’s finest restaurants, bars and cafés will host a variety of mouth-watering food experiences at the Harbour Festival Food Village serving the freshest, most delicious seafood, cooked every way imaginable, including a selection of irresistible Dublin Bay Prawn dishes.

Fingal will also stage The Greening of St Patrick’s Island & Fireworks Display. Off the coast of Skerries, witness the illumination of the place where St Patrick first set foot in Ireland – and the site of his first monastery – St Patrick’s Island. The monastic ruins will be bathed in vibrant green and will remain lit throughout the weekend.

Once the sun goes down, take a stroll through Dublin’s historic streets and see just how many iconic Dublin buildings, venues and spaces have ‘gone green’, especially lit for the duration of the festival.

For a full list of events across St Patrick’s Festival, see WWW.STPATRICKSFESTIVAL.IE

Pat Liddy is many things. An artist, historian, writer, illustrator, broadcaster, mapmaker, and environmental lobbyist who has helped make Dublin a global tourist attraction. The author and illustrator of over seven books on the city, as well as others on Irish cultural sites, he is the operator of Pat Liddy’s Walking Tours of Dublin. I was born and reared in what we might call the inner city, which in this case was Phibsborough. So, in the first place, that qualifies me as a true Dubliner, because the definition is “Born between the canals,” isn’t it? If I wanted to come

As the one national holiday that is celebrated in more countries around the world than any other, St. Patrick's Day is the day when everyone wants to be Irish. What better way to spend it than over five fun-filled days in Dublin at St. Patrick's Festival from 15th-19th March? The festival sets out to seize that opportunity, and completely transform the national and international perception of St. Patrick's Day in Dublin. This country is bursting with the kind of creative energy, ideas and enthusiasm required to make our national holiday an unforgettable experience for all.

A seaside town that’s worth its salt all year round. North of Dublin city in Fingal you’ll find the seaside town of Skerries. Bustling in summer months, the beaches are full to the brim with tourists and city dwellers looking to dip a toe in the sea. But Irish seaside towns take on a different vibe during the autumnal months and Skerries is still worth the excursion beyond September. At this time of the year, you’ll find plenty of people braving some wind for a good ol’ stroll along the seafront. The sea air, a tried and tested cure for what ails ya, feels just as good in your lungs in November as it does in July. The name Skerries originally comes from the Norse w