There’s a lot of history at Lansdowne Road. Including the fact that 73,000 pints were sold on a single day match day recently. Dublin.ie stopped over for a visit to learn more.

But when these sides first met here, in 1876, it wasn’t rugby they were competing at. It was athletics. We won four events to their nine victories, one of which was the tug of war.

The Lansdowne grounds, established by Henry Wallace Dunlop, opened in 1873 and soon provided a home for a brand new rugby club, Lansdowne, of which Dunlop was the founder. But the place also hosted athletics of all sorts like ‘throwing the cricket ball’ (?!), tennis, croquet, archery and bicycling.

The first Ireland-England rugby international in Ireland was played at Rathmines cricket ground in 1875 (Did we win? Afraid not.) It wasn’t until March 11th 1878 that the two sides met at Lansdowne Road (Did we..? No.). This is the date, by the way, that makes Lansdowne Road the oldest rugby union test venue in the world. (Our first victory against England? 1887. At Lansdowne Road. At last.)

You have to fast-forward to 1900 for the first international soccer match at Lansdowne. This took place between Ireland and England on 17 March 1900 (0-2 to England). In 1926, the Irish Free State played an international game against Italy (0-3), the last soccer game at the stadium until Manchester United met Waterford here in September 1968. 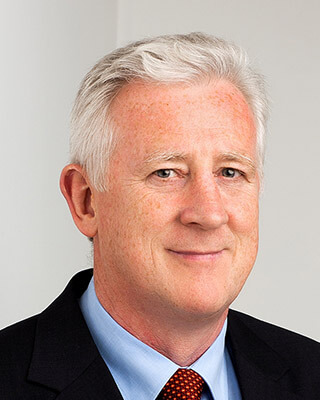 If you’d been there in 1926, and been a member of Wanderers, you could have watched this game from the club’s own pavilion, erected 1912. For this writer, the surreal appearance of a half-timbered cottage-like structure on the sidelines of an international rugby ground was symbolic of the old stadium’s higgledy-piggeldy charm.

It had to be pulled down, of course, along with all the spartan stands and rudimentary facilities – other symbols of an old-fashioned, gentlemanly amateurism in a sport that had no need for it anymore. By 2007, the erection of Lansdowne Road’s latest incarnation was underway, the magnificently shiny and modern Aviva Stadium, ushering the old era out with aplomb.

Dublin.ie asks Martin Murphy, the very gentlemanly (especially for a former second row) director of the Aviva and an ex-Wanderers and Army player, if he misses the days when rugby was played by amateurs at the highest levels, and in front of the old pavilion?

Martin Murphy: People tend to look back with rose-tinted glasses. I certainly enjoyed my time. The camaraderie is probably different now. You know, we played for fun, we played with guys at all levels. On my team there were four or five internationals most of the time and the rest were probably inter-provincials. I played with Robbie McGrath, Philip Matthews, Gerry Holland, Emmet O’Rafferty, Ian Burns, Kelvin Leahy, Paddy Kenny, Ronan Kearney…

Dublin.ie: In the old days they had every kind of sport going on here. Obviously these days it’s primarily rugby and soccer. How do you cope with a days turnaround from one to the other?
Martin Murphy: It is difficult but it’s doable – the stadium is designed to quickly transfer from one sport to another. The biggest challenge is to get the pitch right for both games. So it’s easier for us to move from a football scenario to a rugby one rather than vice versa – that’s because of the amount of damage to the pitch and the lining and so on. But we can do it in about 24 hours – it means that the ground staff will work almost literally overnight – the lads stay in: they finish very late and start very early.

Dublin.ie: Is that right, Majella Smyth, head groundsman here since 1994?
Majella Smyth (MS): It doesn’t matter what sport’s being played on it – we always give it 110%. We put our soul into it. 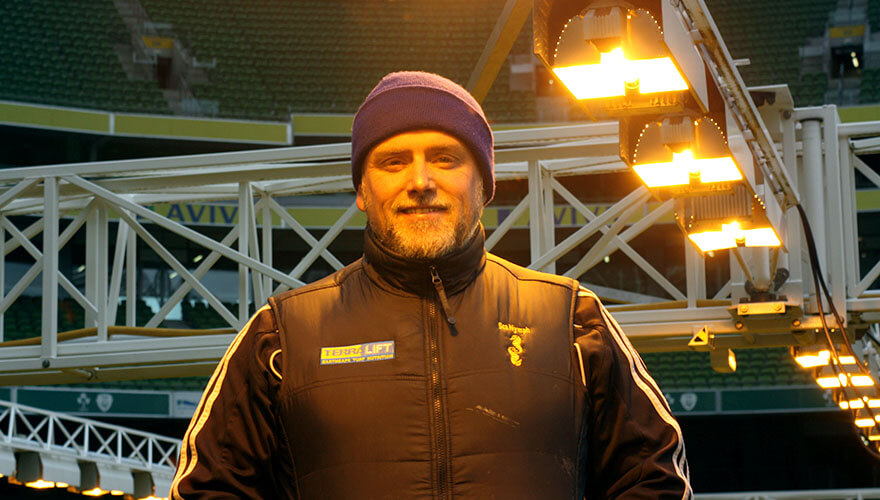 Dublin.ie: Of course you do. But what’s the worst sport for wear and tear of the surface?
MS: American football is the worst, their pitch is smaller in area which means more concentrated damage. Then there’s all the subs on the sideline following the action up and down the pitch. And there’s the running on the spot too.

Dublin.ie: What about the big gigs, I bet you hate it when Robbie Williams rocks up?
MS: A necessary evil (laughs). It helps pay for the place.

The stadium is designed to quickly transfer from one sport to another. The biggest challenge is to get the pitch right for both games

Dublin.ie: Do you see yourselves as rivals with Croke Park?
MS: Absolutely not. (His deputy Darren points out ‘their guys are running over the surface – as opposed to the rugby guys who are tearing it apart…’)

So badly drained was the pitch in the old days that, according to an account by Henry Wallace Dunlop, it was only accessible by canoe when the Dodder was in flood. Nowadays Lansdowne Road accommodates a Desso pitch. This is a thing of horticulture beauty (Majella trained at the ‘Bots’): perfectly drained, optimally heated and sown, if that is the word, with twenty million tufts of polypropylene ‘grass’. This artificial component comprises a mere 3% of the surface, however – the rest is regular ryegrass. But the stability that the artificial stuff provides at root level makes all the difference.

So far this season (we’re in May now) the pitch has withstood over 200 scrums and still looks like velvet. But when it needs to be patched-up, as it occasionally does, Majella and Darren will literally stitch in new polypropylene thread with a great big needle.

Majella recalls with horror his first season at the Aviva – during which they made do with an ordinary turf pitch. He remembers running along in Johnny Sexton’s wake during a game with England to replace a divot, and then having to get out of the way in a hurry when he got between the English pack and the Irish line. 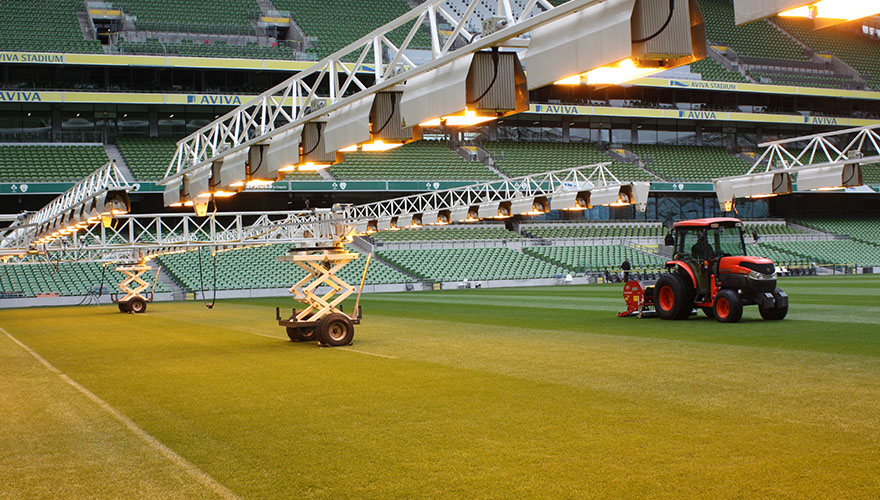 ‘Is it possible for the groundsman to watch a game played here like a regular punter’, we ask? ‘Not really’, he says. He tends to watch the ball, not who has it. Is it moving over the surface in the appropriate manner? Is the pitch going to need watering? There’s a pop-up sprinkler system which can be called into play at half-time if that’s what the captains want.

In fact the whole system that Majella’s put in here is so slick that nothing’s really going to faze him at this stage. Not those grey clouds moving overhead; the pitch’s drainage is so efficient. Even the lack of sunlight in Ireland isn’t a problem: on the day of our visit you can virtually hear the grass growing beneath a huge mobile battery of 1000 watt grow lamps.

But for the most impressive statistic of the day, the laurels go to Martin Murphy. ‘What’s the most pints of beer that have been served on a match day at the stadium?’, we wondered. ‘Seventy-three thousand’, he said, at the Ireland-England game in 2017.

‘You mean the one we won’, I say. ‘That’s the one’, he says. Thirsty work, we agreed, beating the English.

Croke Park. It’s not just a stadium. As Tim Carey, author of Croke Park: A History says: “More than perhaps any other sporting venue, Croke Park represents something that is beyond sport”. The stadium is the home of Gaelic games in Dublin, but it has always had a deeper importance – one that’s intimately connected with the birth and evolution of the Irish nation. “It is freighted with historical significance,” says Carey. “From the naming of the stands after