The UCD AIB Superleague, within the amateur footballing community of Dublin, is renowned for both the disorganisation and passion of its teams.

Often referred to as, The Hangover League, matches take place on Saturdays and Sundays with teams of misfits and football enthusiasts who don’t have the commitment to play for a ‘real’ team in the Dublin league.

In college, football is often a decent ice-breaker when meeting new people. In fact, that rule applies to all walks of life, not exclusively college. The conversation often leads to the question, “So, do you play for a team?” If you respond with, “Oh yeah, I play in the Superleague,” you’ll likely be met with an inquisitive brow and an “Oh… I’ve heard about that.”

It’s like being a part of Fight Club; a hidden community of enthusiastic outcasts, battling each weekend for… well, essentially for bragging rights. No one actually knows what the prize is, nor do they care. It’s not about winning, per se. It’s about getting a runabout at the weekend with your mates, crying and cheering with them no matter what the result. It’s probably the highest scoring league this side of Ukraine. Scores like 8-6, 12-3 and 13-13 are not unusual. Clean sheets don’t exist. 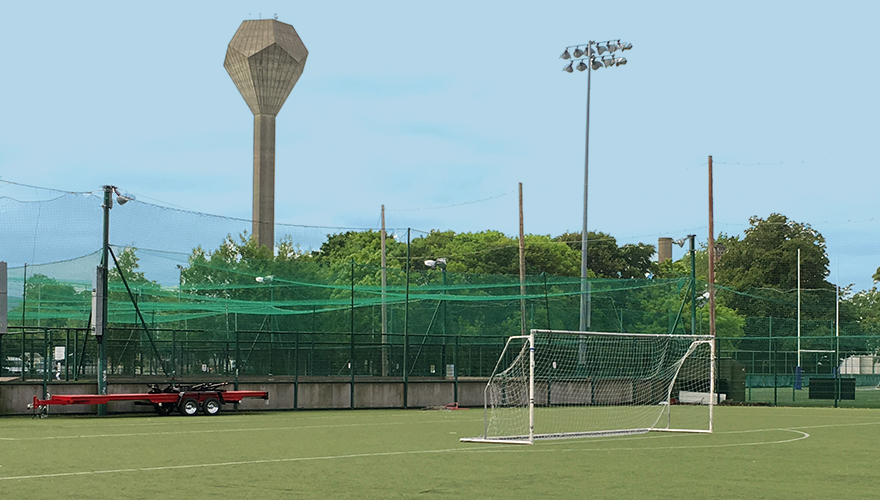 The overall competition is split into two leagues, played on a Saturday or Sunday, as well as two cups. All matches are played in UCD on either the Astro soccer, rugby or GAA pitches.

The Saturday league is of a higher standard by far. Teams playing on Saturday are often made up of people who play in a ‘real’ league as well, with ‘proper’ matches on Sundays. The Sunday league is the one that’s responsible for the tournament’s raffish reputation: a pretext for teams of hungover has-beens to tear around the pitch for 20 minutes before getting a stitch. Teams from the two leagues often collide in the cup, making for a hilarious spectacle for the neutral bystander.

What’s great is that it’s not elite;
it’s for everyone and anyone

Diarmuid McNally organises the tournament. It’s been running since the 1970s, and Diarmuid got involved as a student in the late 1980s.

“I was playing for UCD as a student, and I got involved in the Superleague that way,” he said. “It wasn’t until 2001 that I took over as the organiser.” 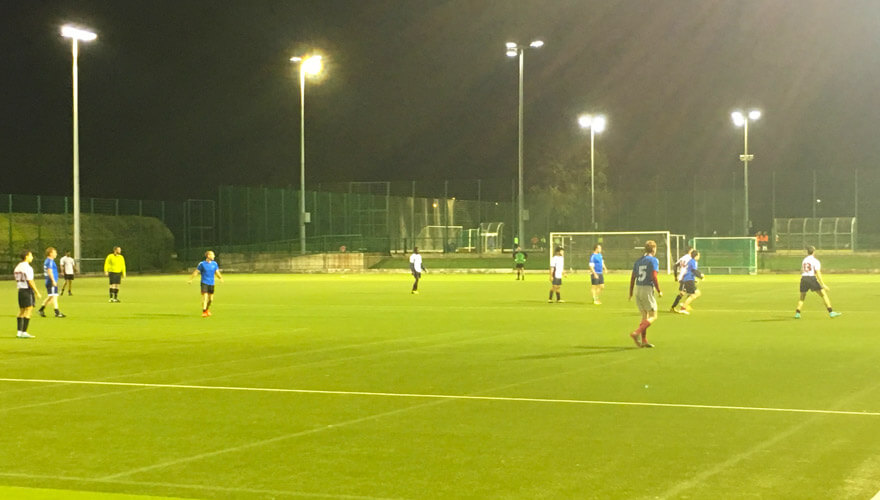 It’s a brilliant way for new students to make friends. “Every year we have about 70 people with no team who want to play, so we make up a few teams from that pool,” he said. “I’ve bumped into people years later, and they’re still friends.”

The 2016/2017 season brought in 63 teams across the two leagues, the highest it’s been. “It’s brilliant to see it’s still so popular,” McNally said. “What’s great is that it’s not elite; it’s for everyone and anyone.”

On a Sunday at the Soccer Astro, you’ll find a group of players, bleary-eyed, smoking and joking before their match, commenting on the kits and notable players of the opposition team, who are taking wild shots at goal as their warm-up. No stretching takes place in the UCD Superleague.

Rumours of ex-League of Ireland players circulate through almost every team. One team has “a lad who played for Atletico Madrid youth.” His name is Sergio, and he certainly seems to be really good at football. Everyone in the league knows about Sergio. His elegance and footballing intellect are admired throughout the Sunday league.

The team names can be crude or hilarious or both. Others are quite witty, such as AC A Little Silhouetto of Milan, or Schindler’s Assist. Some don’t make a whole lot of sense at first glance, like The Old Ladies. This is a take, apparently, on the nickname of Juventus (The Old Lady). A booming voice shouts from the back line: “COME ON LADIES!”. Its owner is Simon Glynn.  He is surely the most passionate man in the Superleague, an embodiment of its spirit, for good and for bad.

Yeah, you see some wondrous things out there amongst the tripe

“The names are a huge part of it,” McNally says. “They can be a bit controversial, but it’s part of it. We’ve had team names making the back pages of The Sun and even BBC radio a few years back.”

Eddy Edmondson has played in the Sunday Superleague for the last eight years with The Old Ladies. A veteran of the competition, he has seen and felt it all. What keeps him going?

“You get bang for your buck,” he said. “Two cups and a league. Not to mention the relaxed atmosphere of it all. It’s fun and friendly, but then, depending on the opponent you can get some high intensity, physical encounters.” 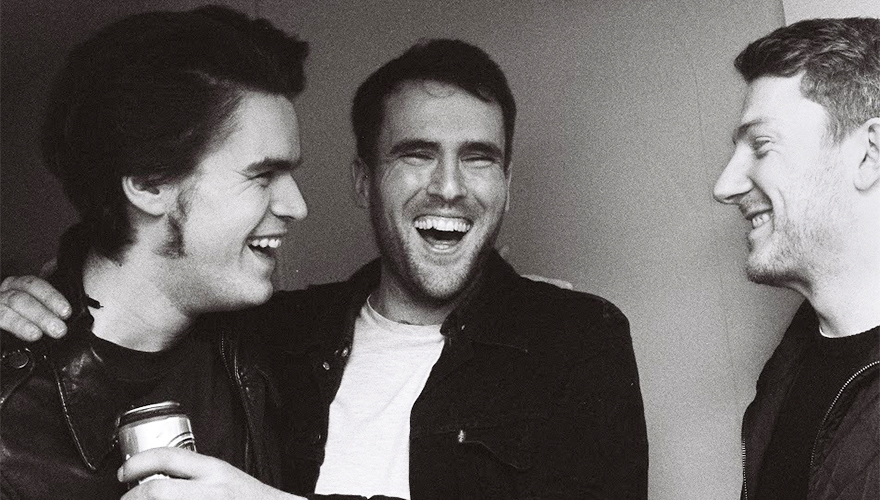 Members of The Old Ladies emphasise the importance of staying hydrated.

Many groups from the south Dublin private school community put teams together, so you have Blackrock vs Michael’s, for instance, which always produces a bit of carnage.

“School rivalries play a big role in the competitive nature of it,” said Edmondson. “You figure out who went where, and that drives you on. That’s why our team has gone on so long as well.”

Indeed, The Old Ladies are, by name and nature, a staple of the league; wise and smooth in their playing style, they’ve put their heart and soul into winning the elusive title. Edmondson has seen that passion consistently throughout his eight years at the top.

Patch scored an Henry-esque one the other week too. He’s a marvel

The laid-back, fun nature of this league has fostered a certain amount of spectator participation on the sidelines.“I’ve seen some amazing things from the pitch,” Edmondson said. “I’ve seen small crowds using amplifiers to heckle the opposition, I’ve heard the drums bang.”

Things can get quite intense, he admits, and sometimes he’s allowed his emotions to get the better of him. “I remember getting sent off when we were 3-1 up with only eight men,” he recalls. “Such is the nature of the league, one Sunday we only had eight men show up. Somehow we were 3-1 up at half-time, but my fiery temper got the better of me and I was sent off. A questionable decision, I’d still maintain that. But ultimately it cost the lads, and I’ve never really forgiven myself for that.”

Despite the peaks and troughs of the quality of football on display, Edmondson has seen some incredible skills and goals. “I remember Hugh McGann rifled one from 30 yards against the best ‘keeper in the league,” he said. “Patch scored an Henry-esque one the other week too. He’s a marvel. My own volley from 20 yards out comes to mind. Yeah, you see some wondrous things out there amongst the tripe.”

It’s a beautiful thing, the Superleague. Only the brave survive, and only the best thrive. Kings of men are made on Sunday afternoons, and their legacy lives on in the memories of their teammates and opponents alike.

The competition is for men only, and if you fancy yourself the next big thing in the UCD Superleague, you will need a UCD student card, an enthusiastic squad of mates, and 60 euro per player.
Seasons kick off in September and go on until March.

When Vanessa Daws moved to Dublin in 2011, she did something that might seem unusual to most people, but has become a habit for her: “The first thing I did was I arranged a swim down the Liffey at dawn – what I normally do when I go on art residencies or move somewhere: I find the nearest body of water and I swim in it.” She tells me that she does this to feel more at home in a place: “to bond with a place. To be accepted by the city. Connecting, submerging, in the city. And I knew if I swam I just knew I’d be able to relax in the city. I knew it would be alright

I used to live a pretty isolated life. I’m not saying that my past was a straight line to Men’s Shed in Ireland but it definitely played a big part in my empathy for those who needed our services. I was an only child of a farming family and in my mid 20’s I ended up being a farmer too. I never wanted to be a farmer. It was just the obvious choice. The area was nice, really quiet, not much happening at all. So, I partied too much, I got into drink and drugs and it was very bad for my health. Farming was like that for me. I felt unhappy and isolated all the time. I badly needed something to change and I guess when I turned 27, I was in the right place then. I had devel

There’s a lot of history at Lansdowne Road. Including the fact that 73,000 pints were sold on a single day match day recently. Dublin.ie stopped over for a visit to learn more. Ireland versus England at Lansdowne Road. One of the great sporting occasions at one of the great sporting arenas. But when these sides first met here, in 1876, it wasn’t rugby they were competing at. It was athletics. We won four events to their nine victories, one of which was the tug of war. The Lansdowne grounds, established by Henry Wallace Dunlop, opened in 1873 and soon provided a home for a brand new rugby club, Lansdowne, of which Dunlop was the founder. But the place als