A 15 minute boat ride from Howth on Dublin’s northside lies Ireland’s Eye – a beautiful and mostly untouched island. The only signs of human activity are two structures: a Martello Tower and the ruins of a church.

A sanctuary for wildlife

However, the island is a hive of activity otherwise. The wildlife on offer is incredible – notably the many species of nesting birds.

The most spectacular natural feature, however, is the huge freestanding rock called “the Stack”. Located at the northeastern corner of the island, it plays host to a large variety of seabirds. Among them are thousands of guillemots, gannets, razorbills, fulmars and gulls.

There’s even a few breeding pairs of puffins. Grey seals are abundant in the sea around the island too. 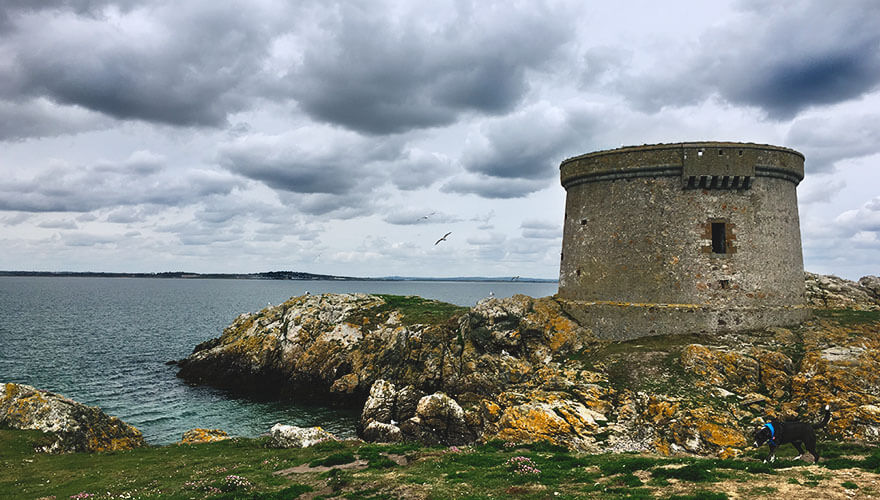 The Martello Tower on the island’s northwest corner

Around 700 AD, three monks established Cill Mac Neasáin church on the island. They were the sons of Nessan – a prince of the Royal House of Leinster. They created a holy manuscript copy of the four Gospels called the Garland of Howth, which is now preserved in Trinity College.

In the late 9th century, Vikings attacked the island. Then, they returned again in the 10th century to destroy Cill Mac Neasáin.

Beyond the tower are a few small beaches, where you’re likely to see curious seals.

Only a small part of the structure now remains, surrounded by ferns and hogweed. It ceased to function as a church in the 13th century – all monastic activities were relocated to the mainland instead.

In 1803, a second man-made structure was built – the imposing Martello Tower on the island’s northwest corner. The Duke of York hoped it would repel an invasion from Napoleon. Two other towers were built on the mainland at Howth for the same purpose.

The island’s most infamous episode occurred in September 1852 when artist William Burke Kirwan visited Howth with his wife Maria.

Local boatmen took the couple to the island and left them there for the afternoon. It’s said that Kirwan was planning to do some painting, while his wife bathed on one of the island’s idyllic beaches. However, when the boatmen returned to collect the couple, Maria was missing. 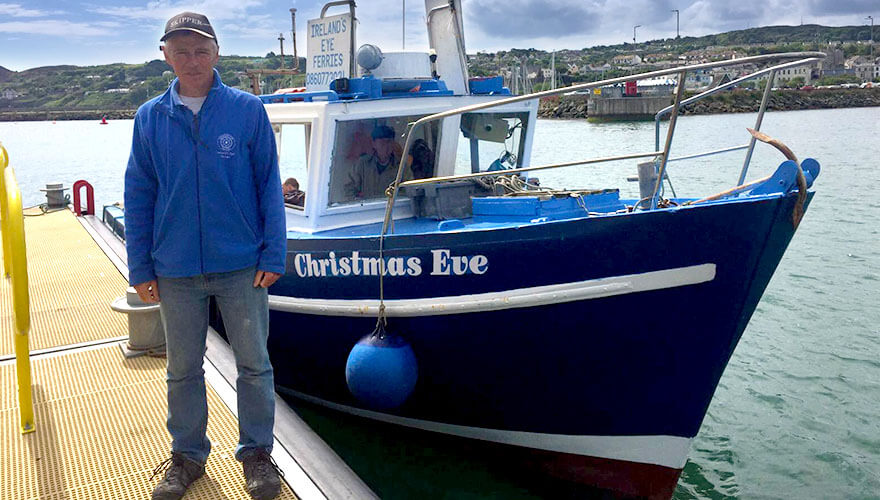 William searched the island with a boatman and discovered her body washed up on the rocks. An initial autopsy concluded she had drowned. Though it subsequently emerged that William was living a double life with a different woman, with whom he had children.

Infidelity was quite the scandal in Georgian Dublin and William was arrested on suspicion of murder a month after his wife’s death. The evidence against him was mostly circumstantial, such as the accounts of pier-goers in Howth who had heard screams from the island.

William was arrested on suspicion of murder.

Ultimately, he was found guilty and sentenced to death, but this was reduced to life penal servitude following the Lord Lieutenant’s intervention. He completed 27 years of his sentence and then left for America upon his release.

If you’re taking a trip out these days, you’ll likely meet Ken Doyle of Ireland’s Eye Ferries on the West Pier. His family have been running tours to the island for over 70 years. This was long after William Burke Kirwan’s trip to the island, but the Doyle family have seen other dramatic events unfold.

In 1947, Ken’s grandfather and father were out on a fishing boat off Howth when a huge wave hit them, damaging the boat. It was sinking and drifting down the coast towards Wicklow.

The boat sank as they stepped off and onto the other boat.

With no flares or life jackets, they had to act fast. A larger boat was visible in the distance, so Ken’s grandfather poured petrol onto the decking and set it alight to catch its attention. Still the boat continued to sink, but help was on the way.

“The boat sank as they stepped off and onto the other boat,” Ken says. “When they got back to the harbour, my grandfather said: ‘That’s it. I’m never fishing again. I’m doing tours to the island’. And we’ve been doing it ever since.”

Once you arrive at the island, you’ll see the Martello Tower. Beyond the tower are a few small beaches, where you’re likely to see curious seals who nest at the southern tip of the island. They’ll often follow you from a distance, keeping an eye on things.

At the far end of the beach you’ll see the “long hole”, where Kirwan allegedly murdered his wife. You can walk up the ridge of the island to the summit here. 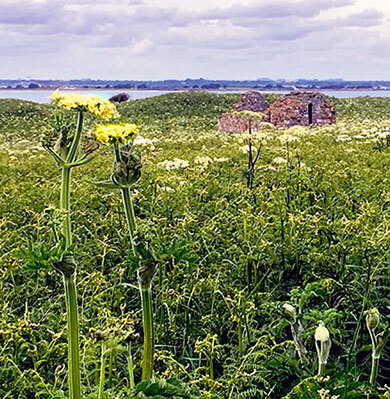 This gives you an incredible view of the cliffs and “the stack”, where countless birds nest. You may even spot the puffins.

At the summit, you’ll get an incredible panoramic view of the island, as well as another unique view of Dublin’s north coast.

Then, one of Ken’s boats will collect you and provide an amazing view of the island’s eastside.

Here, you’ll get a true sense of how many birds are nesting on the huge rock faces.

The west-facing beach is lovely and sandy…

Once you’re back on the mainland, it’s nice to reflect on the afternoon with a pint of Guinness and some oysters at one of the many seafood restaurants that line the pier.

A trip out to Ireland’s Eye makes for a cheap and leisurely day out – just a stone’s throw from the city centre.

If you want to see the island for yourself, visit Ireland’s Eye Ferries.

A closer look at Howth Nestled in the wild and bushy hillsides, overlooking the sea in north county Dublin, you’ll find Howth. A world away from the hustle and bustle of the city, it’s one of those precious resorts that make Dublin so unique. This seaside sanctuary attracts many Dubliners and tourists on the weekends. There are lots of treasures to enjoy here – history, hiking and seafood amongst them. A brief history of Howth The name Howth is thought to be of Norse origin. ‘Hoved’, meaning head, eventually became Howth. Originally an island, a sandy tombolo now joins it with the mainland.

Combining visual art and long distance swimming When Vanessa Daws moved to Dublin in 2011, she did something that might seem unusual to most people, but has become a habit for her. “The first thing I did was arrange a swim down the Liffey at dawn. What I normally do when I go on art residencies or move somewhere, I find the nearest body of water and I swim in it.” The idea of swimming across the M50 was quite interesting, but it was scary. She tells me that she does this to feel more at home in a place: To bond with a place. To be accepted by the city. Connecting, submerging, in the city. “If I swam, I just knew I’d