A closer look at Dublin’s neighbourhoods

Nestled in the wild and bushy hillsides, overlooking the sea in north county Dublin, you’ll find Howth. A world away from the hustle and bustle of the city, it’s one of those precious resorts that make Dublin so unique: a seaside sanctuary for many Dubliners and tourists on the weekends. There are many treasures to be enjoyed here, history, hiking and seafood amongst them.

The name Howth is thought to be of Norse origin. ‘Hoved’, meaning head, became Howth over the years. Originally an island, it’s now joined to the mainland in the form of a tombolo, as evidenced by the long sandy beaches. 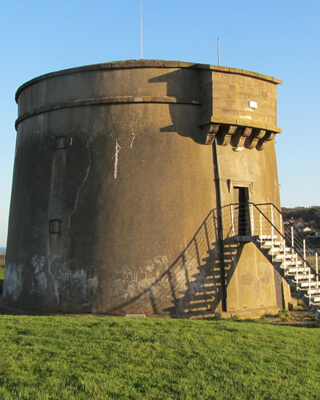 Jutting out into the sea is Howth pier. A lighthouse at its end overlooks Ireland’s Eye, an uninhabited island that can be reached by boat. The Vikings substituted the word ‘Island’ with ‘Ey’, the Norse equivalent, and so it became known as Ireland’s Eye. It’s host to a variety of seabirds and a Martello tower – which we will tell you more about later. Looking back towards the mainland, the sea-front is lined with colourful buildings, the majority of which are seafood restaurants.

Did we mention the seafood? The lobster pots stacked along the harbour and countless fishing boats all point to the fresh seafood to be had in the restaurants. Popular with anglers, cod and ray can be caught here, and seals are a common sight at the harbour. Beshoff’s, which would compete with Burdock’s for the tastiest fish ‘n’ chips in Dublin, sits by the seafront. Visitors sit out-front on the green areas, munching from takeaway boxes and giving the scene an easy-going, relaxed air. It’s not all about fine dining and yachts!

If you feel like more than a stroll, there are plenty of hikes and walks among the hill and cliff sides nearby. Why not take a walk up to the Martello Tower, on top of a hill, overlooking the village? Martello Towers were built in anticipation of invasion by Napoleon in the early 19th century. Bomb-proof forts, they housed cannons which could fire at incoming ships. This particular tower plays host to a surprisingly quirky guest, ‘Ye Olde Hurdy Gurdy Museum of Vintage Radio’. It’s a little museum, with a trove of communication devices and radios – some still working. If you’re lucky, they might even play you an old record while you’re there! 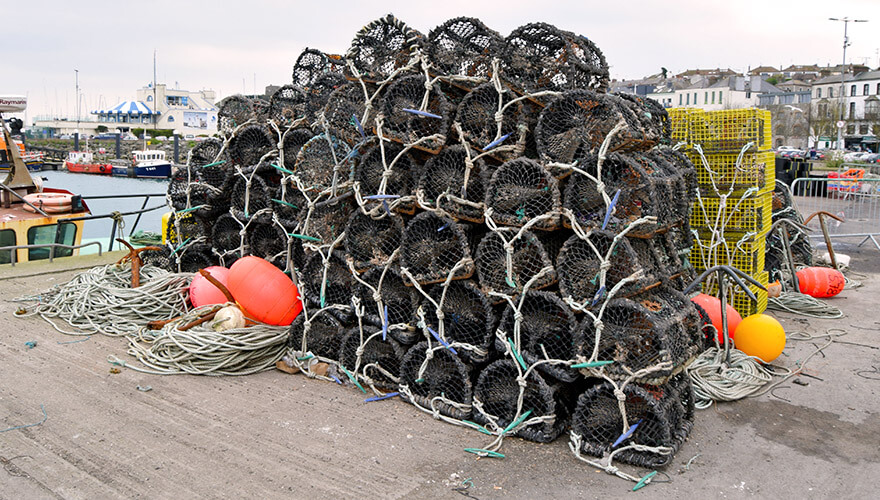 Lobster pots stacked along the harbour

Tucked away in a small courtyard is an array of charming stalls at Howth Market. Pick up some jewellery or Irish crafts, smell the baked goods and sample the cheese and olives. Try the churros, cooked fresh in sight to bring a Spanish vibe to North Dublin on a sunny day.

A 10 minute walk from the market is Howth Castle. It’s the private residence of the Gaisford-St Lawrence family, and is one of the oldest occupied buildings in Ireland. It’s not usually open to the public, but the occasional tour can be booked through their website. A popular tale dating from 1576 tells of the time Grainne O’Malley was refused entry to the castle while attempting to visit the Earl of Howth. 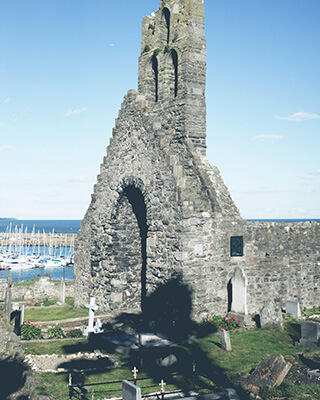 She abducted his grandson and as a ransom demanded that guests would never be turned away again and that the gates of Deer Park (the Earl’s estate) would never be closed to the public. The gates are still open to this day, and an extra place is set for unexpected guests during formal dinners in the castle – or so they say!

There is so much to see and do in Howth that it deserves more than a single visit. From the view of the Baily Lighthouse on the cliff walk through to the ruins of St. Mary’s Abbey dating back to 700AD, it’s one of the best places in the county to get away from it all and explore Dublin’s coastline. So pick a sunny day, grab the binoculars and get the DART from the city centre out to Howth (25 minutes average journey time).