Remember where the fairy tale of Little Red Riding Hood took place? Or Hansel & Gretel? Well, these days, it’s not stories of the deep, dark woods parents try to spook their children with, but the bright lights of the city.

Maybe they’re afraid of them growing up too quick, of venturing out into the big wide world. It’s all futile, however, because for a kid reared out in the suburbs, the ambition always is to be able to go into town one day, sans parents.

It was interesting speaking to one such teen, Eric, now at the ripe old age of 16, to see how much has changed and how much has stayed the same. He recalled with us he and his friends’ first excursion, and explained how it was a rite of passage. A medal of bravery to be won. And how, now, they like to get into town at least once a month.

Come secondary school, nobody wants to be the only one in the class not to have boarded a double-decker bus and cast away for a few hours of adventure in the city centre. It takes one in the group of friends, with a little entrepreneurial spirit to put it all together: to set a date, to consult the bus timetable, plan how they’re getting home as well as get there, to put the others’ minds at ease. Where are we going? Where do we get off the bus? What if we get lost?

For all the nerves parents have for the average 13 – 15-year-old on their first foray into the city, it’s probably never been safer. Travel options have never been more plentiful. And sure they’re all carrying smartphones. Although few of them seem to realise these pieces of electronic wizardry can be used to speak to another with, in addition to messaging on Snapchat and Facebook.

Then there’s the biggest question of all. Where the real voyage of discovery is to be had: What is there to do in town anyway? For years, these kids’ only experience of Dublin 1 and 2 has been trailing from one department store to another, up Henry Street, down Grafton Street, after their parents in pursuit of curtains, bed linen, schoolbooks and clothes. Shopping-wise, only the latter of these holds any interest for them now, and the opportunity to buy a new pair of trousers (or in 2017, particularly for the tribe Eric counts himself amongst, a pair of grey tracksuit bottoms) without their mammy making them try it on in front of the whole shop is one they will grab with both hands. 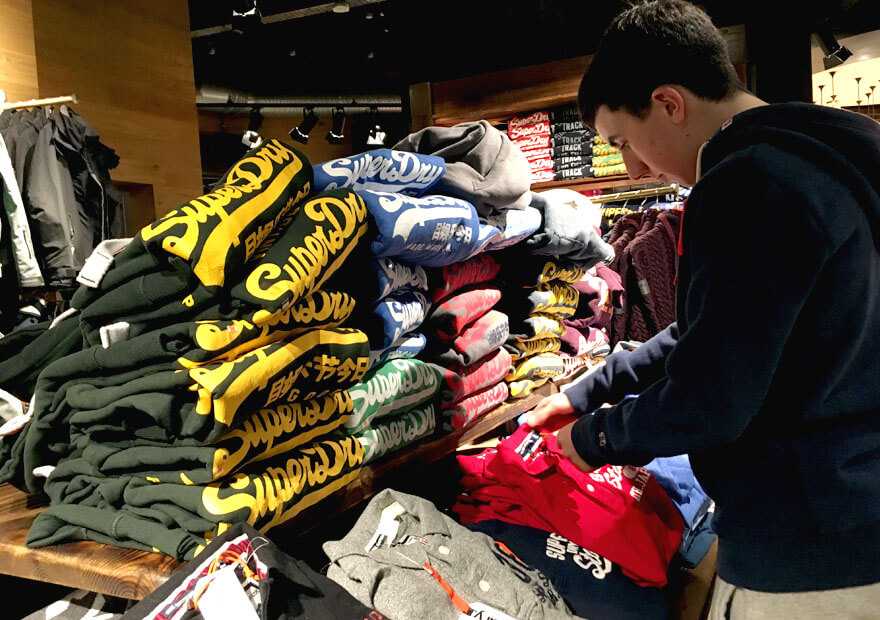 But shopping is only the half of it, maybe even a whole lot less than that. Every trip to town is a chance to explore streets never travelled and sights never seen. Without a car to get back to, a meter to be topped up with change, or all the other errands of parenthood to be run, teens have all the time in the world to just stop, and let the world pass them by, or come right to them.

The surroundings of the Central Bank is, and always been, a focal point, a place to congregate, mingle and meet. But today’s teenagers have a whole lot more on offer to choose from than their predecessors, and a little more courage maybe too.

We can often scoff at their supposed short attention spans and how they spend their lives buried in their screens, but they can be a surprisingly cultured lot. When they wander off the Grafton Street straight, they’re not afraid to stroll around the museums and galleries they find, or explore the grounds of Trinity, wondering if this is where they will find themselves three or four years from now.

The George’s Street Arcade is a long way from the identikit chain retailers in the large shopping malls closer to where they live, and offers much richer treasures for them to peruse. With the demise, pretty much, of the larger music stores, it’s here, and across in Temple Bar, where this iTunes/Spotify generation will chance upon the wonder of vinyl, and return home with an LP, like they have just discovered a new element.

Then there are the street performers to stop and watch, and the eccentric, loud, larger-than-life characters, perhaps to be avoided, but whose antics will fuel the banter on the lads’ bus ride home.

But perhaps more than anything, a trip into the city on their own represents climbing the first few rungs on the ladder to adulthood, and all the freedom and independence it brings with it.

Remember when whether you lived on the Northside or the Southside of Dublin was a really big deal? Like, practically life-or-death? No? Well then either you’re not originally from around these parts, or you moved around in circles that never saw you encountering anyone from the other side of the Liffey. God forbid. So how deep did this, this rivalry we could call it, go? Well, think of it like this – there are those who would refuse to go to Dunne’s Stores in the Stephen’s Green Shopping Centre if they hadn’t got the slippers they were after in Dunne’s Stores over in the Ilac. We’re talking garlic-to-a-vampire type of aversion here. The side of the Liffey on

Through losing stage and screen legends, 1916 Rising commemorations, The Boss in Croke Park, the birth of a baby elephant and retaining Sam Maguire. It's been quite a year for the county. True, every year has its ups and downs. But surely 2016 was more uppy and downy than most. So let’s kick off with an up - about 20 storeys up, as it happens.