True, every year has its ups and downs. But surely 2016 was more uppy and downy than most. So let’s kick off with an up – about 20 storeys up, as it happens.

January: There was something different about the Dublin skyline as the new year kicked off. Almost overnight, it seemed, a massive proliferation of cranes had appeared. Construction was booming in the capital once again.

February: In a matter of weeks we lost two of Dublin’s best-loved actors: Frank Kelly and Johnny Murphy. One was our favourite inebriated priest and the other our favourite trumpeter. Both will be missed enormously.

March: We spent a lot of this month – and quite a bit of the next one too – wondering who our new Taoiseach would be. As it happens, we got our old one back: Enda Kenny is the first Taoiseach from Fine Gael ever to win re-election. 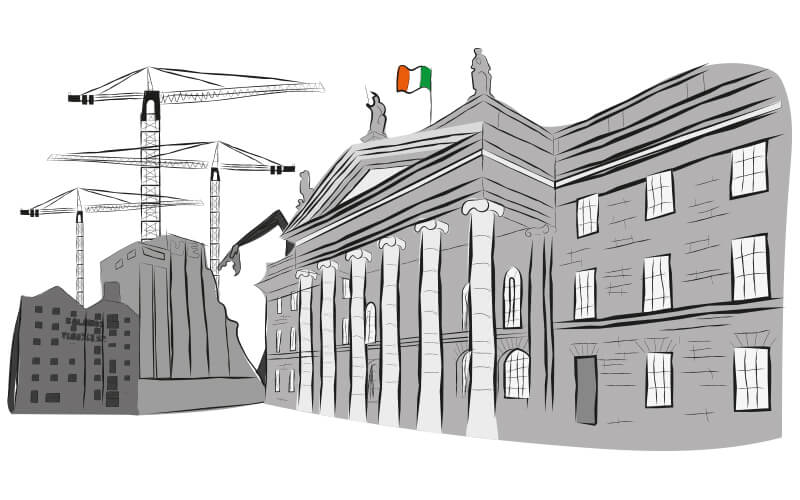 April: The 1916 centenary commemorations were under way. A green flag had been raised over the GPO. It bore the two words ‘Irish Republic’. Dubliners couldn’t help feeling proud.

May: The musical highlight of the year had to be Springsteen in Croke Park. It even had the recently re-elected Enda Kenny jigging in the rafters.

June: THAT goal by Robbie Brady against Italy. It was a wonderful year for Dublin athletes but Brady’s goal, sealing our place in the knockout stages of the Euros, was probably 2016’s sporting highlight. A night that will live long in the memory of every Irish football fan.

July: After months of demolition work, the iconic bulk of Boland’s Mill on Grand Canal Dock – or at least its brutalist 1950s silo – was no longer with us. Its reinforced-concrete construction meant it was a long old time in coming down. Work on the building’s replacement at the site continues.

August: The death of Gene Wilder, our favourite fictional chocolate factory owner, was keenly felt throughout the city. Wilder himself told the story that when he was in Dublin for the filming of his 1970 movie Quackser Fortune, he picked local child extras from the poorest parts of the city in order to support their families. One boy in particular, David, got on so well with Wilder that David’s mother suggested that the Wilder family adopt her son and bring him up in America. The parties agreed and the government gave their blessing too. But in typical Wilder fashion, the actor wanted to know what the boy himself really wanted. David’s response? “Nah, I don’t want ta do dat”. And that was that, said Wilder.

September: You can rely on the arrival of a new baby to spread a bit of cheer about the place. And when that baby has a trunk and a tail? Well, we were delighted to say hello this month to Zinda – an Asian elephant calf born at Dublin Zoo.

October: More good news for Dublin as our gaelic football team beat Mayo to win the Sam Maguire cup in front of a Croke Park crowd of 82,249. A single point sees Jim Gavin’s men break Mayo hearts once again as Dublin retain Sam for the first time since 1977. Going into next year’s Championship there’s no doubt that the bookies will have the Dubs installed as favourites.

November: Another sporting highlight: Conor McGregor, the boy from Crumlin, did it all again on the world stage, becoming UFC lightweight champion. In doing so he became the first, and only man, to hold two UFC division titles.

December: The Luas construction work thankfully stopped for the Christmas period. Not only was this great for shoppers, but we got to see the scale of the work which has been taking place. Dawson Street in particular is beginning to look especially elegant once again.

Compiled by Dave Sihra with illustrations by Aoife Flynn

“Christmas comes but once a year”, they say, to which I always reply, “But Christmas Eve comes first!” Not just because of the fact it comes a day earlier, but because it happens to be my favourite day of the year. As some friends and colleagues sleep off the night before and relish their lie-ins (which won’t feel as sweet given that Christmas Eve falls on a Saturday this year), I’m up and out the door, observing my own personal tradition of taking a long walk out into the middle of Dublin Bay or, in other words, along The South Wall. The view from the lighthouse at the end of the pier is stunning at any time of the year, but it’s something special on this pa

The writer William Faulkner’s famous quote ‘The past isn’t dead; the past isn’t even past yet’ is particularly applicable to Ireland’s centenary year. History has never seemed so alive or relevant, with the marking of the Easter 1916 Rising. Tying the past, the present and the future altogether are the core themes of the centenary programme: remembering, reflecting and re-imagining.