“Christmas comes but once a year”, they say, to which I always reply, “But Christmas Eve comes first!”

Not just because of the fact it comes a day earlier, but because it happens to be my favourite day of the year.

As some friends and colleagues sleep off the night before and relish their lie-ins (which won’t feel as sweet given that Christmas Eve falls on a Saturday this year), I’m up and out the door, observing my own personal tradition of taking a long walk out into the middle of Dublin Bay or, in other words, along The South Wall. The view from the lighthouse at the end of the pier is stunning at any time of the year, but it’s something special on this particular day. Watching the ferries arrive, I like to think of the hundreds of people on board, and the ones I can see braving the elements out on deck waving, coming to visit or be reunited with loved ones and relations. Dublin Airport seems to have this iconic time and the imagery associated sewn up, but there’s something real and grounded about people landing on these shores aboard a ship. 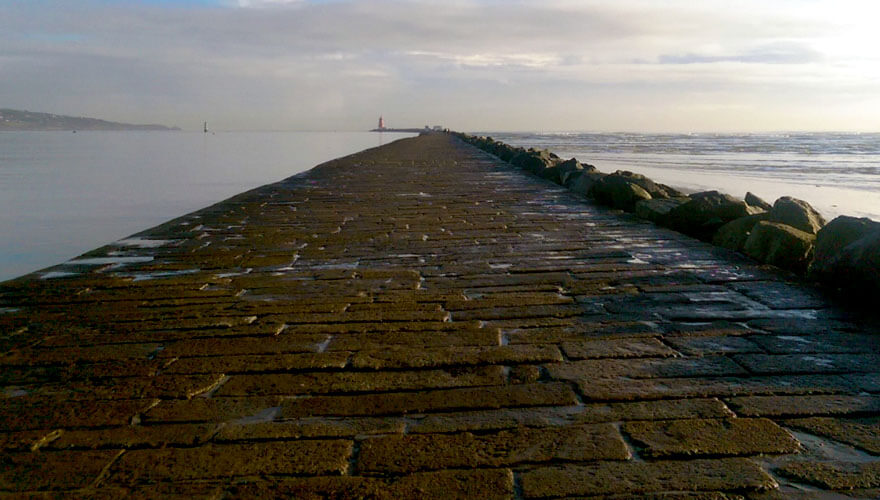 Back on dry land, or at least a couple of miles more inland, I delight in embarking on a journey a lot of people go out of their way to avoid, and that’s the last-minute present shopping mission to Grafton Street. What fills many with fear plants a big smile on my face, and there’s nothing, not even a brolly in the eye or a stressed-out shopper walking on my toes, that can erase it. But shopping is only part of the Christmas Eve Grafton Street experience. I nail that with military precision and efficiency in about an hour with 3-for-2 offers to beat the band, crossing everyone, whether or not they’ve been naughty or nice, off the list as I go. No, this day is all about waiting for the sun, if indeed it ever managed to come up that morning at all, to go down.

Kids all around me are thinking about just one more sleep until the big man in red arrives, while I’m thinking it won’t be long now until Glen Hansard shows up with guitar in hand, smack bang in the mecca of busking, for an impromptu performance of his own in aid of homelessness. But who will be waiting in the wings, or coming around the corner, to join him? Last year, Bono, Hozier, The Script and Kodaline, amongst others, appeared, bringing hundreds, maybe well over a thousand, to watch, bringing the street to a standstill in the process. I think I’ll hope for that line-up again on my Christmas list this year.

Next up, if I can get in the door, my wish will be for a cheeky pint of the black stuff in the cosy in Kehoe’s with a couple of friends who have braved the crowds to meet me, before completing the picture postcard evening with a stroll home along some of the streets that feature in that brilliant Guinness Christmas ad, hopefully with my all those presents still in hand and not left underneath the seat back at the pub. Of course, by the time I get home and face up to the reality that I will have to wrap all of those gifts now (I did remember wrapping paper, didn’t I?), I may well be regretting not “misplacing” them somewhere. Vouchers and gift cards seemed like the lazy way out at the start of December. But at half past midnight, and falling asleep on the couch watching the end of Die Hard, I think if the three wise men were about now, vouchers would be what they would go for. Ah well, until same time next year. Oh, and Merry Christmas, or a Happy Christmas, if you prefer.

The people, mammals, places and things that make Dublin special. A gang of lads. Shy, reserved, quiet. Just chewing the cud. Sure, every now and again there is a bit of jostling. Just like you would expect from a group of healthy young males. But there’s one thing you would not expect. And that’s the complete lack of interest in the women across the way. It’s almost like an old country ballroom. Men on one side. Women on the other. But come September, that will all change. Scents will be donned. Fights will be had. Women will be chased. Another generation will be born. So

Meet Oliver Cunningham of Wall & Keogh, Dairine Keogh of Clement & Pekoe and Anya Letsko of Joy of Cha. These three are in the vanguard of Dublin’s tea-house renaissance, a movement that’s three parts infusion of leaves to one part charmingly quirky interior decor. Are they operating on a higher spiritual plane than their coffee-fuelled counterparts? Where are they on the vexed question of sugar? Dublin.ie finds out. Dublin.ie: You people are making a bit of a song and dance about tea aren’t you? Why so? Oliver: We do take it seriously at

“The Abbey is your national theatre. We are here to tell your stories.” These were the words of Neil Murray, recently appointed alongside Graham McLaren as one of the Abbey’s new directors. And the Abbey itself has long been part of our city’s story. Nestled in the bustle at the heart of Dublin 1, amidst the comings and goings from Busaras and Connolly station, the Luas clangs past its door, and the Liffey’s squawking seagulls are within earshot. President Michael D Higgins regularly attends opening nights, a straight run for him down the quays from the big house in the park. The last t