Unique and personal perspectives on life in The Pale. This week: Writer and poet Aidan Matthews.

Whatever a CV says, we are born in rooms and grow up in houses.

Cities come later, long after streets and shops and villages and churches and a signal box at the level-crossing on Sydney Parade where an elderly man with enormous ears, who is almost deaf from fifty years spent switching points on the coastal track, gives you a Victorian penny to insert in the slot of a thing never seen before in the whole wide world: a vending machine that sells British bubblegum called Zapper to twelve year-old schoolboys who wear short grey trousers in mid-February.

My spacious, south-facing room at home was a lot larger than the total cubic capacity of the tiny, terraced cottages in Donnybrook where the children in their vests and Y-fronts waited on the pavement for their parents to arrange the bunk-bedding when the sun set and Herbert Park closed; and the house itself stood tall among many embassies, such that, by a sort of hop-scotch at their granite gate-posts, you could credibly claim to have called on your grand-dad down the road in No. 23 by crossing territorial portions of Austria, France, Germany, Belgium, and even notorious Nigeria, where gallons of blood-red paint had been emptied onto the wrought-iron gates by bearded trouble-makers because of the Biafran atrocities and the rape of a Ballina nun from the Medical Missionaries.

These massacres, of course, were a mystery, like the Foot and Mouth disease we prayed against at Mass on Sunday mornings in the Sacred Heart. So too was our mild and matter-of-fact street-number, 69, which made my class-mates titter and even the beautiful priest who taught us Greek smile momentarily like the Mona Lisa (he left eventually). Most obscure of all was the parental embargo on telling anyone at all that my Clonakilty granny, who had watched corpses wash ashore from the Lusitania to be promptly pick-pocketed, had worn her first footwear at sixteen, although I understood that this intelligence deeply disheartened my loyal mother who had traded a south-west Munster accent for a West End intonation on a steam-train at Limerick junction in the year of the abdication crisis, and who never lost it, either in eight arduous labours (I was the seventh) or in her dignified death-throes from paralysis agitans as the second millennium petered out, but no computers crashed, in Year 2K.

The times mutate, and we are mutilated with them. When I was little, guttersnipe magpies had already picked the metal Latin letters, one after another in no particular numerical order, from the clockwork golf-course in our back-garden, until there was nothing left there but a hole in the ground at the very centre of the lawn, like a plot prepared for a shrub or a bonsai sapling. Then, for a time, when it was freshly filled, the grass grew darker on the spot, as if one or other of the family dachshunds, Cindy, Scamp, or the dauphin Maximilian, had disregarded basic protocol and urinated illicitly on the feature view from the dining-room instead of at the privet behind the coal-shed where the gardener ate his lunch, rolled his cigarettes, and talked to us of soldiers excreting at Dunkirk while the Stukas raked the shoreline from a sky with no flak at all.

Ex-servicemen do not require third-level training to understand that Iliads are our real Odyssey. If Schliemann’s Troy, now called Gallipoli, turns out to have umpteen inhabited terraces over the centuries, scaffolding on top of ruins, ruins on top of scaffolding, sack and resettlement, Dublin has its own populous doppelgangers, its own multiple doubles. My homesick sibling in the state of Victoria, a specialist in post-traumatic stress disorder, has lived in Melbourne longer than he did in his childhood capital, yet pines in terrible Fahrenheit for a place that was abolished in the 1970s, the ghost-town of his gorgeous adolescence; and my clubbing adult daughters socialise by sat-nav and by Hailo app in a phantom metropolis I do not recognise, its short-lease wine-bars and boutique hotels a cartoon of Europolity amid deconsecrated spaces and Dutch bicycle lanes and a bus marked with an unknown and an ominous name that is half-famine and half-foreign: Ongar.

Only the rooms remain, and they are smaller now with wall-to-wall carpeting in place of the old linoleum borders and the chipped skirting, while the trees outside have magnified, row by row and ring by ring, tumorous broadleaves tilting their pavement slabs like headstones on the Day of Judgement, and shrill with the bitch-craft of the same bickering magpies who had taught me how to read the times. 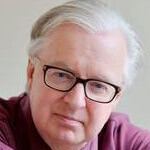 Aidan Mathews was born in Dublin. Since 1984, he has been a Radio Drama Producer at RTE. He has written two collections of poetry, two short story collections and a number of plays. He works as a Radio Drama producer in RTÉ.

For the love of spice bags... In Dublin pubs, the conversation has now evolved from queries of ‘What is a spice bag?’ and ‘Have you had a spice bag yet?’ to more pressing issues of etiquette and availability. Because everyone’s mother probably now knows what a spice bag is, that celebrated, moreish takeaway meal combo of chicken, chips and spices in a bag (foil or paper) and the occasional bit of onion and red pepper thrown in. She may have even eaten one. Once seen as something only millennials should let past their lips, it’s now gone properly mainstream, and was voted Ireland’s favourite dish at the Just Eat National Takeaway Awards last year. A mere culinary craze? We don’t think so.