1966 was the 50th anniversary of the 1916 Rising. De Valera was president. Nelson’s Pillar was blown up. In the same year the Bishop of Clonfert protested about a guest on The Late Late Show who told host Gay Byrne that she hadn’t worn a nightie on her wedding night. ‘66 also saw the opening of Ireland’s first shopping centre, in Stillorgan, south county Dublin. For generations of Southsiders – and especially their children – Stillorgan Shopping Centre was a place of magic, glamour and excitement. It gave us a glimpse of the USA: a wonderland of airy spaces and covered walkways arranged around a capacious car park.

Leading-edge architects of the time, John Costello and Sons, made a stylish job of its design. And the Kilkenny Design Centre created a very groovy ‘S’ logo for it too. With its white terrazzo floors and its stainless steel pylon, its circular kiosk (since gone) and its covered walkways, it was as if this little piece of the south county had floated in from south California (architecturally, that is) – the weather remained terrible. But at least there was weather, which is more than you get in the hermetically sealed airport-style shopping centres that were built in subsequent decades. 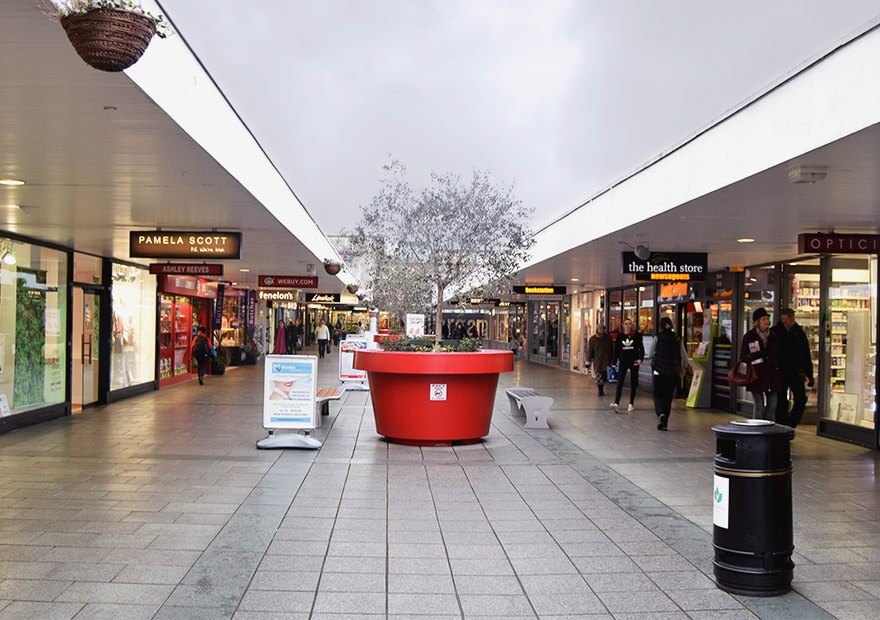 The centre was opened by Irish singer, Dickie Rock, fresh from his success at the 1966 Eurovision Song Contest with his hit song, “Come Back to Stay“. Before the advent of the shopping centre, of course, people did their shopping in the village or on the main street of the local town. “I used to be a messenger boy. People would ring the local shop and I would cycle to their houses to deliver the groceries, as they didn’t have cars”, notes local man, Billy Fitzgerald. But as cars became more popular, so too did American-style shopping centres. You could park and get all your shopping done in one place and then load up the car with groceries. “I remember when the shopping centre opened, it was very modern at the time. My mother would get the bus, or wait until Saturday when my father was off work to go with him in the car” says Billy. The scale of the new supermarkets meant they could sell things cheaper by buying in bulk – another reason for their popularity.

Ireland’s first Quinnsworth supermarket was opened in Stillorgan Village Centre by Pat Quinn. In fact the shopping centre boasted three supermarkets initially: Quinnsworth, Power’s Supermarket and Lipton’s Supermarket. “I went to St. Mary’s National School, and then Oatlands Secondary School, just down from the shopping centre. I remember Billy Panama, a yo-yo champion, was doing tours in Dublin at the time”, remembers Billy. “He used to do loads of tricks with the yo-yo, like walk the dog or rock the cradle. Quinnsworth in Stillorgan was selling yo-yos, and I remember people hanging around Stillorgan Shopping Centre showing off, doing tricks after school.”

In order to make room for the shopping centre, a row of cottages from the early 19th century was knocked down. The rubble was used to level the land at Kilmacud Crokes GAA Club. An advertising spread in Women’s Way from March 1967, shows just how valuable ‘specially planned parking spaces for cars’ and ‘a restaurant with a separate coffee bar’ were at the time. Having a kids’ nursery, restaurants, and shops all in the one place was a “new idiom of consumer service”.

There was a conscious effort at internationalism too, with a long row of flagpoles. This being the ‘70s, the era of the ‘Troubles’, no Union Jack was flown. But there were various European tricolours in primary colours – Belgium? Holland? No one was sure – to make up for this lack. And there was the Stars and Stripes, of course. Fitting, then that Eddie Rocket’s and MacDonald’s are both now tenants: a testament to the Americanisation of the nation that Dubliners could only hope was on the way when the place was first opened.

As it happens, however, the shopping centre wasn’t the first glimpse of Americana in Stillorgan. In December 1963, Stillorgan Bowl, the first bowling alley in Ireland, was opened. It was always said that the Oatlands students were the best bowlers at the time, having as they did ample opportunity to spend their evenings bowling after school. You’d wonder how they’d have fared against Bruce Springsteen, who is a regular visitor when he’s in town for a show.

In terms of personal memories, this writer recalls the branch of Bewley’s café upstairs. Here you could buy a variety of sticky buns. Or, even better, a Mary cake – which was an individual square-shaped cake with a thin layer of marzipan on top of a chocolate fondant filling. It would have you buzzing with sugar for much too long after you’d eaten it. Downstairs there was an actual pub – a good place for the menfolk to rest themselves as their wives did the shopping, one presumes. Later on Bewley’s opened a shop where the pub had been: here you could gaze at pictures of the Bewley family’s Jersey cows as your order of deliciously aromatic coffee was measured out into a brown paper bag.

But Stillorgan Shopping Centre didn’t have everything. You had to nip across the road to get the best toys – they were at Nimble Fingers. Some people maintain that this is actually the best toy shop in the world – and they’re not wrong. Nimble Fingers has another very special thing going for it, however. Because from its doorstep you get a great view of the best little shopping centre in the whole of the south county.