John Lambert, aka Irish musician Chequerboard, is by his own admission, “not a megaphone person,” however his music is being heard loud and clear around the world.

Chequerboard’s most popular song on Spotify, Opening the Gates, has had almost 11 million streams, a pretty phenomenal achievement for the Dublin man whose gentle atmospheric music comprises looped acoustic guitar and textured electronica. Sitting down for a chat in the coffee shop of the Chester Beatty Library, John is modest about this unexpected success and candid about the winding road to it.

Chequerboard’s ambient music was born from noisy beginnings. Although he comes from a folk music background, (photos of his ballad singing mother Angela Byrne grace the walls of O’Donoghue’s bar off Baggot Street), he was always drawn to experimental electronic bands, like Aphex Twin. “I got really into electronic stuff and wanted to stop doing singer-songwriter stuff. I have a very slight voice, and I couldn’t perform the way you need to.”

In 2002, at the age of twenty-five, Chequerboard released his first album, Gothica, which was “75% electronic, to 25% guitar. All recorded terribly and mixed terribly, but it was just done with absolute passion.” It was John’s first experience dealing with a record label, and he didn’t know what to expect. With high hopes, he immediately quit his full-time job in web design. “After a couple of months, I realised I had no income, and I went back to them and said ‘Can I get part-time?’ And they were really nice.”

There’s a surge of energy and there’s nothing like doing a good gig, it’s such a high

He moved to a different record label, Dublin’s ‘Lazybird’ and had a better experience. “They used to run a night up in The International on Sundays which was weird electronic music, mangled saxophone, the most extreme experimental noise music. You’d have a small amount of people who would turn up. They were great gigs.” It was through Lazybird that he released his next album, Penny Black, in 2008.

He credits radio and TV presenter Donal Dineen with helping him around this time. “We did a gig up in Whelans, all candlelit. He got me to do a series of gigs in Dublin, and I did one or two down in Sligo with him called Dineen Presents. That was a great boost.” John also spent some time as the inaugural fellow on the music fellowship programme in the Model Arts Centre in Sligo, where he put the final polish on the album. 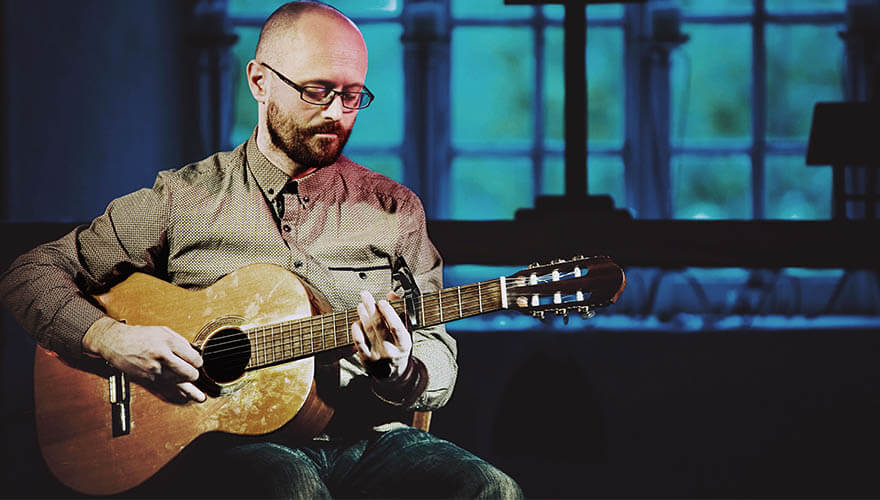 With Penny Black, his reputation was firmly established. “I got some really nice reviews in the Times and Hot Press. That was good for my confidence. I was pulling apart the electronic stuff and I was getting more into the guitar.”

Around this time, he did a lot of gigs, too many, he thinks now. He mentions one in particular in Camden Lock, where Mike Reed from Top of The Pops compèred and Norway’s runner-up Eurovision act came on after him. He played the festival circuit, but when things died down, he took a step back.

“Each time an album has come out I’ve tried to up the ante and tried to get new musicians on board and do a new show. There’s a surge of energy and there’s nothing like doing a good gig, it’s such a high. But when the momentum goes, I’m not too interested in just being a jobbing musician going around doing loads of gigs.”

After Penny Black, “there was a bit of a drift”. It wasn’t until 2013 that John released ‘The Unfolding’, the album that is currently bringing in those big listening numbers. “I’m averaging five years between albums. Despite having a lot of ambition, when it doesn’t work out, or once you lose your nerve, you can scurry away from it. I think that’s natural, and also the pressure of trying to cultivate a livelihood.”

With The Unfolding, John wanted to expand his sound and introduce strings to his music. This time he had no label and he raised the money for the album through a Fundit campaign after a friend dared him, saying “you have twenty seconds to give me one good reason why you shouldn’t.”

John raised €7000, all he needed for studio time and printing the album. “That was an amazing boost and I was able to go off and do the album properly then.” Renowned producer Ken Thomas, who has worked with Sigur Rós and the Cocteau Twins, also came on board. “Hearing strings over one of my songs for the first time… Spine-tingling.”

Again, the album was well received. “It would pop up on radio and in the background of programmes. And then it’s business as usual for the next five years.” He laughs now at that time between the albums. “I’ve made peace with it. I do graphic design, and I’ve started doing a bit of writing, and I’m happy with that now.” 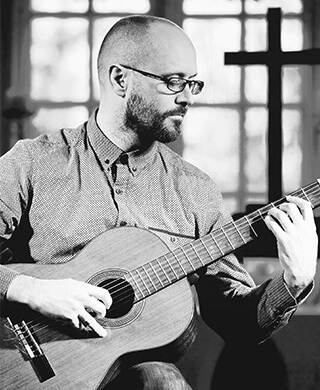 But then along came Spotify. Chequerboard’s music was added to a “prominent playlist” called Deep Focus, which is followed by nearly two million people. “It means I get played in a lot of cafes in Singapore and Norway.” Other musicians may criticise Spotify, but “it is how people want to consume their music,” John concedes. “I’ve got the most wonderful people getting in touch from around the world.

“I was lucky because there’s a tipping point where you’re doing so much stuff for so many years and enough people know about it that it starts to get its own [momentum]. Like I remember a friend said to me when that happened, ‘How do I get my stuff on Spotify?’ and in my head I was thinking, well maybe you have to do three albums over a twenty year period and break your heart. That is how it happens.”

John admits that with time his expectations have changed. “Just having cultivated an engaged audience, I think, that’s as much as I could ever hope for.”

A new album is on its way. The initial guitars are laid down. When he thinks about what his music is about, “I think the guitar is definitely the voice in it. I often go back to being quite sentimental. I like the idea of coming away from something feeling comforted or inspired. So I think as complex and as challenging as my mind wants my music to be, when it comes to it, I try to say that I like simplicity and I like to pare it back. I like trying to say as much as possible in as simple a way as possible.”

John plays to his strengths these days, now knowing the best venues for his music. He mentions a recent gig in Stoneybatter in a converted church. “It took years to train myself to say no to louder busier gigs ’cause the music has got quieter over the years so it’s much more suited to arts centres and churches.”

And despite the highs and lows, he still sees Dublin as an inspiring place to make music. “Absolutely. Just thinking about going to other places and not seeing the same network of support. There’s a good fertile scene here.” The help is there “if you have the nerve to gather a lot of people around you, and god knows there have been plenty of people who have jumped in. My latest incarnation of my live act is a guitarist and two cellists, which to me is unthinkable from ten years ago. Any time I manage to gather the courage to ask anybody, they’re jumping.”

Keep up to date with news and events on chequerboard.com

Dublin’s docks met the same sorry fate in the 1970s as those elsewhere around the world, the arrival of containers revolutionising shipping and decimating dockland employment. Work that had sustained inner-city communities for generations suddenly evaporated. The Docklands became empty, desolate wastelands until the first regeneration project came in the shape of Charles Haughey’s Irish Financial Services Centre in the late 80s. The IFSC was developed on the north side of the Liffey behind Connolly train station. While banks and other financial services moved into the area, it had little impact at first on the citizens of Dublin. And at night there was a tumbleweed feel to th

One of Rathmines’ smallest buildings happens to be one of the most distinctive, for it houses a Dublin art collective, MART. The old fire-station, with a classic engine-red door facing the main street, was built in 1847 soon after Rathmines became an independent “township”. Like the magnificent Rathmines Town Hall, the station was a symbol of township independence and civic pride. The fire crew based here played a big role battling the inferno, which blazed around Sackville Street during the

When Izzy was little she always said that her favourite thing about being in a wheelchair was that her shoes never got dirty. They looked brand new every day and the lights never ran out in her favourite light-up runners. However, her real shoes were her wheels. I remember we used to decorate her wheelchair for birthday parties and Halloween. We filled them with fresh flowers once when she was a flower girl for a wedding. At Christmas, we used to put tinfoil and lights around the wheels and lots of tiny Christmas decorations for the Xmas family show.