On St. Patrick’s Day 2017, Stephen James Smith sat a few rows back from Michael D Higgins in the presidential stand outside the GPO.

Sitting beside his father, he watched as the parade passed by on O’Connell Street. He thought about how bizarre the whole situation was. He felt humbled by the experience. Aware of the risk of getting a swelled head, he knew he had to stay focussed on the next project.

Stephen had been commissioned by St. Patrick’s Festival to produce a poem in honour of our national holiday. The parade was inspired by Stephen’s words. “It was surreal,” he says. “Almost 20 years ago I was scribbling song lyrics into my notebook, trying to be a musician.” On the 17th of March, Stephen was watching his poem ‘My Ireland’ come to life, marching by in theatrical fashion. “I thought it was amazing, seeing lines of my poem literally walking around.”

At 16, Stephen was entering battle of the bands competitions, trying to make it as a musician. “That’s it, I’m essentially a failed musician!” he laughs. “I was trying that for about four years, and then it was at a 20th birthday when I gave one of my poems a go.” The reception was good, and he put more focus into poetry than musicianship. 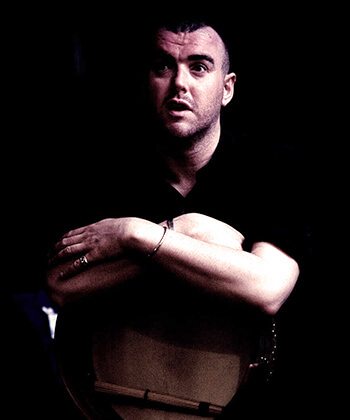 He began performing at music nights around Dublin. “I used to go to an open mic night in Slattery’s in Rathmines. Generally, you’ll be told to feck off, as a poet, in open mic nights.” He participated as a musician initially, but eventually tried some poetry. “It got a good reception, and it introduced me to a community of people doing similar things.”

He says that performance poetry was not the life he had expected. “My life had been mapped out for me to be a mechanical engineer,” he says. “But all of a sudden I was surrounded by other poets and performers. Suddenly poets weren’t just dead people on a page, they were people I was engaging with and learning from directly.”

Most of you will have heard ‘Dublin You Are’ and ‘My Ireland’. But his story goes back much further. “I was writing a lot about people back then. I was an introverted young man and I think I was trying to give a voice to others. But that was when I was younger. The stuff about Dublin and Ireland, that’s something different.”

He still gives that voice to others; themes of marginalisation and people are still sewn into the workings of these recent poems. But his earlier work is more direct and specific. Take ‘The Gardener’, for example. It’s a poem for his mother. And his childhood with her.

Dublin’s my home, I feel centred here, I feel connected to my art here

Through university his themes changed. “I started to analyse things differently. There was a noticeable stepping back and critiquing, almost from an objective perspective, if such a thing can be attained. I suppose it was a maturity coming around.” Stephen studied English, Media and Cultural Studies at IADT. “There was a political focus to the course, and that’s definitely had an effect on my poetry.”

‘Dublin You Are’ expresses both a love and disappointment for home. “Dublin’s my home, I feel centred here,” he says. As a writer, he is part of a unique community in Dublin. He knows other writers; poets, novelists, playwrights and songwriters. “I feel connected to my art here.”

Expanding on that concept, home, he began work on ‘My Ireland’. “It was going to be called ‘Ireland You Are’, but I wanted it to be more personal,” Stephen says. It was another new challenge, and more politically focussed. “I’ve been struggling with this ‘new Ireland’ idea,” he says. “It’s a contentious term. Ireland has such a huge diaspora, and we’ve been welcomed into some many pockets of the world. We have to embrace change too.” He refers to a binary opposition that is manifesting itself across the globe: “We’re all terribly scared of this ‘otherness’ that’s building up, and it’s dangerous. We’re picking semantics to suit us.”

With Brexit and Donald Trump either side of us, Stephen feels that Ireland has a responsibility to resist the pitfalls of xenophobic nationalism. “Racism comes up a bit in my recent poems. I think the state of direct provision is awful, and with everything going on around the world, we need to remain strong. There’s a history of treating people badly in this country, look at Tuam for example. And we’ve been treated badly ourselves. So we need to resist it now more than ever.”

His approach has changed over the years. “I think it’s a maturity thing,” he laughs. “I sit down with a laptop, researching for days. I’m no longer a moody young man scribbling on napkins.” The processes vary, but with ‘My Ireland’ he needed a long process of researching and experiencing Ireland in order to write about it. “I opened a Google doc and just filled it over time with that research. I listened to people, the media, friends. I travelled about the country a bit. And then it was a matter of trying to distil that sense of a time into a piece of art.”

He says the reception to ‘My Ireland’ has been overwhelming. “I get so many emails, I struggle to respond but I am trying to get back to everyone individually. I had a 90 year old Irish/Norwegian lady contact me recently.” He says it’s incredibly heartwarming, especially when he thinks back to when it all began.

“I’m fortunate, but still struggling,” he says. “I’m not the finished article and I’ve a lot of work to do still. I’ve a lot of projects to finish.” He says it’s perseverance that got him to where he is. “It was 14 years of hard graft. And you need to try and be sound; it’s a supportive community, but opportunities diminish if you’re an arsehole no matter how talented you are. Your referrals are vital. So try and be sound, say ‘thank you’, and take the opportunities.”

Phil Lynott, Dr Seuss and Eminem stroll into a bar. They sit down, have a few drinks and start to have a raucously good time. That’s the sort of vibe you get from writer and performance poet, John Cummins. John would argue that Bob Marley has a place at the table too. “Bob Marley was huge where I was growing up. You’d hear him out of literally every window. And sure Dalymount Park was one of his last gigs.” John cuts a curious figure. Skinny. Tall. Thin. Bearded. But with a wild braided bardic beard, not a hipster one. Overall there’s a gentle, affable groove to