The popularity of spoken word is on the rise in Dublin and one of the stars of the scene is Elayne Harrington, AKA Temper-Mental MissElayneous.

She’s a rapper and slam poet from Finglas and a standout female performer on a male-dominated scene. Dublin.ie first saw Elayne perform at a women’s storytelling night in Temple Bar’s Project Arts Centre. With her trademark hairdo of curlers in her fringe, the bold red lips and her warrior stance, she was defiant and gutsy. She set her words to the beat of her bodhran and silenced the room. It was a call to arms.

“Open it up, let it loose,
What’s trapped and hidden.
The heartbeat of our city
is an unrelenting rhythm.”

She wrote her first poem at nine and she named herself Temper Mental at fourteen, MissElayneous came later. She discovered hip-hop, studied it and it became her driving force. “Hip-hop partially reared me up, guiding me along a lyrical route, offering insights into social dynamics.” As a cultural movement, it gave Elayne a route to self-expression and “has impacted how I view myself, the world, and myself within the world from the age of 11.”

Hip-hop has impacted how I view myself, the world, and myself within the world from the age of 11

“I was allured by some of the rap artist’s capacity for posing questions, for challenging the status quo with unique flows and varied styles.” At school, “sometimes I would recognise literary devices such as alliteration, metaphor, especially the distinctly rap literary tool – the simile. This highlighted the connections between rap and the type of poetry which I was being introduced to in the traditional classroom.” Later, she’d incorporate elements of traditional Irish music. “I was marrying Irish culture to this American independent cultural movement,” she has said.

Elayne is a fixture now at festivals like Electric Picnic and Body and Soul. She gained further recognition after appearing in RTÉ’s ‘Connected’ in 2015, a series in which six women filmed ten months of their lives on handheld cameras. The Irish Times described Elayne as “a rather tough rapper, until her intellectualism is revealed, and her reflective nature, as she transitions from being homeless.” At that time, Elayne was moving into an apartment after fourteen months of being homeless. Breaking down the stigmas of homelessness remains one of her goals. 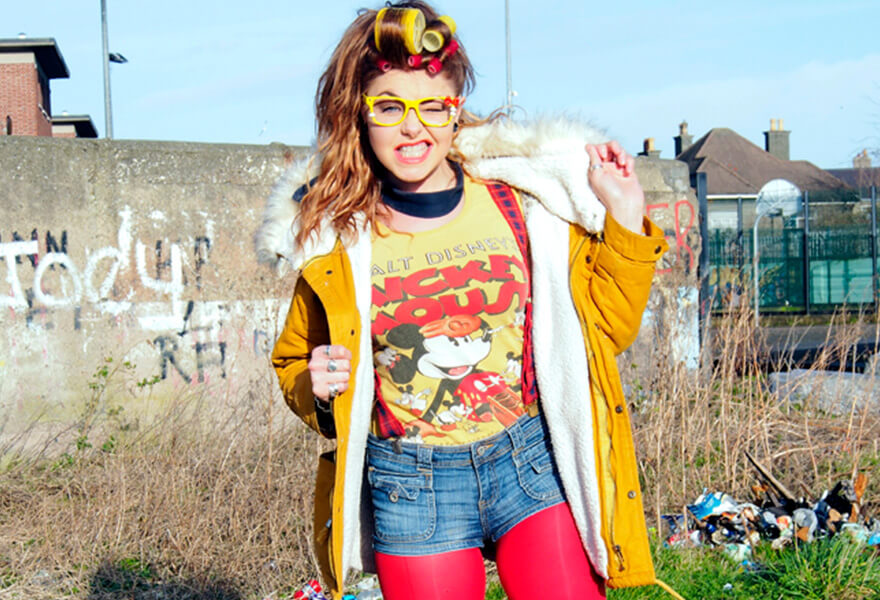 Speaking of a mentor who was particularly inspirational on her journey: “I met with renowned saxophonist Ciarán Wilde during the running of a youth project hosted in axis Ballymun”. She had worked as a facilitator in a creative youth programme. “The creative coordinators at axis saw how naturally I fell into that role and made the decision to formalise my ability to connect with the young participants. They took me on to mentor rap and poetry, musical and performance groups. Ciarán loved my work from the start and has always supported and believed in me. He set up a jazz hip-hop show to exploit my lyrical abilities in a live musical format.”

With that show, for the first time Elayne began to play in live venues around the city. “Rapping with solid members of his big band was amazing but I really enjoy getting down with the quartet. We would trade bars just like in jazz but with a hip-hop twist.” She explains how this “cutting practice” in jazz is similar to ‘battling’ in hip-hop. She began to understand “the teachings of jazz and the crossovers evident in hip-hop.” She recorded a double-A side, Heart Lose Tempo, with Ciaran and there will be a jazz hip hop album coming this August.

Elayne has been keen to help children express themselves by bringing the street smarts of slam poetry into the classrooms, particularly those of Ballymun’s Trinity Comprehensive.

“A yearly junior cycle programme called WRAPP Around (Writing, Rapping And Performance Poetry) happens each springtime in participating schools all across Ireland. I had been introduced to Trinity Comprehensive through promotional visits to local schools for axis Ballymun LiFt Youth Arts Festival.” Poetry Ireland arranges for rap and poetry mentors to workshop in schools and asked Elayne to mentor in Trinity Comprehensive.

Not all people have the connections, the stamina and the tools to fight their way into college like myself

Elayne’s workshops give students “an opportunity to develop skills in listening to and really hearing one another.” Communication and collaboration are key. “I aim at helping the students build their confidence in terms of their performance abilities, interacting with the reader or listener or audience”. She also gives guidance in the areas of self-promotion and management. “The curriculum I have designed is oriented around utilising the skills not only in isolated creative settings but everywhere and at any time. The entire process is about discipline, empowerment and exchange.”

And energy and movement are vital. In these workshops, you only sit down for the writing process. “It is about the performative ability of the individual, the overt and subtle physicality of the art of performance and about energy exchange. The angle is contemporary, live, personally challenging and demanding in a different way to algebraic equations and accounting.”

She also sees the value in having artists and poets in residence at schools. “It shows the students how the creative translates to professional practice. The sheer nature of the rap/poetry performance workshops incites interests, which reach deeper into personal, social and cultural dynamics. This asserts passion in the students. They are fired in a way that standard subjects cannot achieve.”

Outside of the conventional academic curriculum, she sees young people engage more proactively. “I’m not knocking that type of [traditional] teaching and discipline. It has its place and works, but not for every student and certainly not day in-day out. Imagine students being enthusiastic about classes consistently. They would be more energised, alert and more involved. It would enhance the overall health and morale of the entire school. The community would be impacted positively and society would flourish.”

The art world would benefit hugely from more class diversity

Elayne is currently studying in Dublin’s NCAD, which she entered via the college’s access programme. She describes herself as a “mature student coming out of homelessness into third level education” but she notes that “not all people have the connections, the stamina and the tools to fight their way into college like myself.”

She believes the academic world would benefit from class diversity, “and from my personal experience, especially the art world. The children and young people of working class communities in particular certainly need more accessibility to opportunities which would guide their creative and professional development.” She quotes Moore Street activist Diarmuid Breatnach, “The most important thing is for working class people to realise their power. Together, they have the ability to radically change this entire world.”

All images courtesy of MissElayneous

Catherine Conroy
Catherine Conroy is a Dublin writer, regularly contributing to The Irish Times, and dabbling in fiction in The Dublin Review. Her novel continues to wait patiently in a drawer.
By using our website you are consenting to our use of cookies in accordance with our Cookie Policy
Copy link
CopyCopied