The second annual Dublin Startup Week, which took place from October 21st – 25th 2019, was a celebration of the city’s innovation and startup ecosystem.

With five days of networking events, keynotes, panels and workshops – all free of charge – the event was aimed at future, current, and repeat startup founders. Find out more at dublinstartupweek.com

First up in this mini-series, we meet Colin Keogh, one of the event’s leading lights.

David R Pollard, Gene Murphy and Colin Keogh are founders and organisers of Startup Week Dublin. Keogh is also captain of the event’s Innovation Track and works as a research engineer at UCD. We caught up with him on campus.

“Failure?” says Colin Keogh, “I love it! It’s the most important part of an innovation process”. The statement is typical of Keogh’s practical, nuts-and-bolts approach to innovation – an approach that owes something to his experience working as a car mechanic with his father.

“A car would come in with something broken”, he says. “We’d find out what was wrong with it, we’d fix it, and then it would leave again. So that’s the only way I deal with anything. Over the years, be it at university or in collaboration with companies, the process to me is still the same. Something is broken, you find out what it is, you fix it, and you move on.”

Failure? I love it! It’s the most important part of an innovation process

Keogh isn’t a fan of developing theoretical solutions to problems. “Solutions need to be practical”, he says. “You need to see them work; they have to run and then as they’re running, you can evaluate whether they’re good or not. If they’re good, great, you try and make them better. And if they’re not good, you try something else. There’s that element of failure in it that I love.” 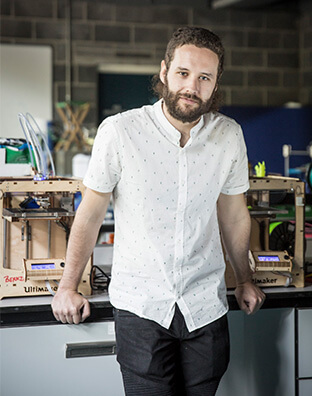 Keogh’s bracingly pragmatic attitude encompasses the whole world of the startup – no rose-tinted glasses here. “It’s a difficult road to go down”, he says. “It’s beset on all sides with enemies and failure, but you have to undergo the hard struggle for it to be a success at the end. That’s what makes the company. It forms the idea, and it forms you as an entrepreneur.”

One of the purposes of Startup Week is to make people aware of how difficult the journey is, he says. “There‘s going to be problems; there’s going to be arguments, you’re going to lose money, you’ll lose motivation. But there’s a community around you that have already done that. They’ve been through the mill before, and they’re there to help you get through it too.”

Keogh is quick to point out one of the benefits of the startup community in Dublin: “I think Dublin has one of the better ecosystems because it’s made up of people that live here. We’re very chilled-out compared to a lot of other cities in the world. We are very social; we are hyper-connected to each other.”

Startup Week and the innovation track, in particular, are in the business of forging more of these vital connections, says Keogh. To achieve real innovation, he believes, you have to put groups from different backgrounds and different experiences together. “The thing I like the most about the innovation track is the different groups that we are joining together under the topic of innovation. So we have Enterprise Ireland, we have the local enterprise authorities, we have all of the government bodies that oversee innovation deployment in Dublin. But we also have the coworking spaces; we have some of the companies, we have some groups like the Dublin Makers.”

“That’s what it’s all about in the end”, he says, “the network and the connections between people and what they will then do in the future”. He wonders what will come of all these people – from sometimes quite silo-ed areas – working together. What will they create during the week? If you want to find out yourself, check out the innovation track at Startup Week – but make sure you’re ready to roll-up your sleeves. It sounds like it’s going to be that kind of track.

Keep up with the event organisers on social to get continued insights throughout the year, and head along to next year’s events!

Sustainable, ethical clothing designed in Dublin Grown Clothing is a Dublin startup that prints beautiful, simple designs on ethically-sourced, environmentally-friendly shirts and t-shirts. Its origins lie in conversations between three friends as they journeyed back and forth between Dublin and the West of Ireland, on swimming, surfing and scuba-diving trips. What inspired this sustainable startup? The ocean-loving friends were Neil McCabe, Stephen O’Reilly and Damien Bligh. They often noticed rubbish in the water and on the beaches they explored. This made them think about the ecological impact of plastics and modern fabrics – and how we pr