“There’s always someone looking at you,” sang Dublin band the Boomtown Rats back in 1979. Today, in the city, that someone is Andrew Harris at the Traffic Control Room.

Andrew and his staff monitor the screens in their room in Wood Quay, 24 hours a day, 365 days a year. They’ve got 400-odd cameras in locations all over the city. Some of them you can see – up at the top of street lights, for instance. However, it’s the ones you can’t see that command the best views, like the one atop Liberty Hall.

“It gives us a bird’s eye view of a big section of the north and south quays,” Andrew says. “So we can see O’Connell Bridge”. He pulls a joystick and a zoom lens more than a kilometre away gives us a crystal clear image of some unusually well-behaved traffic on the bridge.

What’s interesting is the way the patterns change.

He zooms in on a white van, studiously obeying the traffic lights. “So that camera is absolutely crucial morning and evening,” he adds. 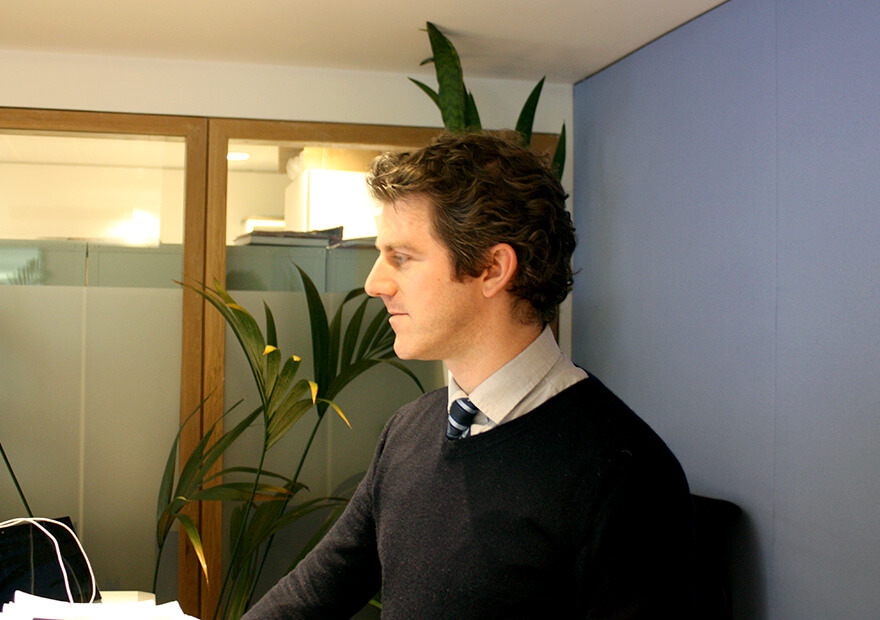 Camera number 22 is on top of Dublin City Council’s own Wood Quay offices. On this sunny afternoon, the view it’s showing of the quays is worthy of a John Hinde postcard. “What a fabulous view!” says Dublin.ie, having an aesthetic moment.

Andrew is more pragmatic: “It gives you a very good view of the quays. What’s interesting is the way the patterns change. In the morning, the north quays are a very, very busy route,” he says. “In the evenings, it can be busy as well – people coming in, maybe going to the concerts, but it’s the south quays that are the main artery out of the city.”

If anything goes wrong here, it has major implications for the rest of the city centre.

The traffic lights are automatic, but it is possible to override them here in this room. So could Dublin ever have a situation, like in The Italian Job, where robbers take control of the lights and bring the city to a standstill?

“When I watched that film, I was very interested because the room in the film is the one we work in here essentially – but our lights don’t work like that,” he says, dispelling the myth. “We can’t have both approaches on green or two conflicting approaches on green at the same time.”

Traffic will divert in crazy ways.

It’s simply not possible. Though that’s why Andrew and his team are here. To make sure everything’s doing what it should and nothing goes wrong.

“If things are really grinding to a halt or we have an incident that we’re dealing with, we can intervene and lock a different plan in for anything from two minutes to ten minutes – to two hours, three hours,” he says. 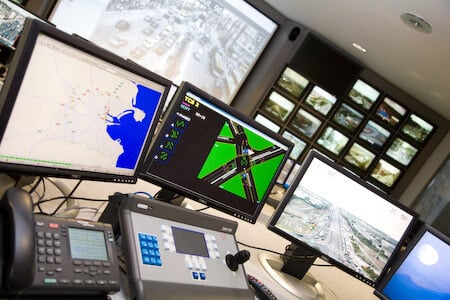 In extreme circumstances, he even has the power to put lights on green for two minutes or three minutes at a time.

“It’s risky, because traffic might start breaking the lights, so it’s only in extreme circumstances,” he says.

It’s moments like that which keep his work interesting though. “Our job is trying to make sure that we’ve thought of everything, because traffic will divert in crazy ways,” he says. “It is evolving minute by minute literally”.

However, being omniscient in the world of traffic control has its downsides too.

A lot can change in just a moment. Lots of delays are caused by Dubliners’ bad driving – people not reacting quickly enough to greenlights or stopping on yellow boxes. Then, there are the crashes.

“We see countless near-misses every single day,” Andrew says. “If we notice there’s accidents happening in the same places, we’ll make recommendations. Either the junction needs to be looked at in terms of redesign or additional pedestrian crossings – or you need to increase the gap from the time the lights go red to when a pedestrian crossing comes on. This happens regularly.”

It makes you very aware of the dangers.

According to Andrew, working in the traffic control room makes staff more safety conscious. “We’ve seen the aftermath of probably thousands of crashes at this stage,” he says. “It makes you very aware of the dangers… It’s really not worth taking a risk when you see the roof getting cut off a car…”

Andrew has spied plenty of pleasant scenes in the city too though. People going out of their way to help broken-down drivers, passers-by shooing swans out of the way of the cars and, when working night shifts, they get to enjoy views of sunset and sunrise that no one else ever could.

Get a glimpse of Dublin’s traffic cameras for yourself

At rush hour, the traffic control room fills up. The Gardaí are usually here, while Dublin City FM broadcasts LiveDrive 103.2 from 7-10am and 4-7pm on weekdays too.

“If you’re on Twitter, I’d recommend you follow @DCCTraffic, @LiveDrive and @GardaTraffic for updates,” says Andrew. People can also view Dublin’s live traffic cameras online, but only when his operators aren’t actively using them.

Outside of work, Andrew doesn’t have to tune too often. While he does drive – and he tells us that his dream car is an Aston Martin – he usually gets the DART to work.

To learn more about the council’s work, read about what Dublin’s local authorities do.

Dr. Ruth Johnson is Dublin’s City Archaeologist and she is charged with protecting, managing and investigating the city’s oldest heritage – much of which is underground. As well as conservation projects, Ruth has input into new developments across the city and a role in policy development advocacy. We spoke to her about how she works and what’s going on across the city – under the ground, in our oldest graveyards and in half-hidden houses. In conversation with Dr. Ruth Johnson Ruth began her career working on a community excavation project in Yorkshire, while doing her A-levels. This piqued her interest in archaeology and she went on to do

Colouring the county one traffic box at a time A series of colourful traffic control boxes has added art to the streets of Dublin city as part of the Dublin Canvas project. It’s probably the first time most of us have even noticed these boxes. Their old dull appearance was nothing to admire. Now works of art, they showcase the artistic talents of people across Dublin. Dublin Canvas is the community street art project behind these pieces. Its main goal is to make the city more beautiful and it has definitely achieved this. David Murtagh, the project’s co-ordinator, gave us some background on the project. From trial run to runaway success Dublin Canva

Introducing Project Air View A new initiative between Dublin City Council’s Smart Dublin programme and Google will see the capital’s air quality monitored street-by-street. This is part of Google’s Environmental Insights Explorer, which helps cities reduce emissions by providing the data needed to inform smart transit programmes and increase the use of more environmentally-friendly modes of travel. The initiative was born from a clear need for hyperlocal insights on air quality in Dub