Ever wondered what it would be like to be your own boss? Graham Rogerson did. After several years doing shift work in IT, he was ready for a change.

One thing that got him thinking about opening a shop was that he’d get to meet people. “And that didn’t really happen much in IT,” he remembers.

The question ‘what sort of a shop?’ was a bit of a no-brainer. Graham is a member of a family with sea water coursing through its veins.

His grandfather James and James’s brothers had their own fishing boats. Before they were 12 years old, Graham’s father, George, and his uncle, Tommy, were selling fish on the Coal Quay in Dún Laoghaire.

A welcoming environment, where people wouldn’t be intimidated.

As a child in the 80s, Graham himself worked in the family fishmongers in Monkstown Farm. This closed down when the business focus shifted to Ocean Marine, a wholesale business now run by Graham’s brother.

Then, in 2009 – just as the recession was really kicking in – Graham and his sister Lisa decided the time was right to reopen the family’s shop. They named it George’s Fish Shop in honour of their father.

A new take on an old tradition

This time round, however, things were going to be a bit different. Their fishmongers would have a deliberately contemporary take on the business of selling fish. And the vision wasn’t just about opening a shop.

“From the start,” says Graham, “it was about building a brand”. The brand’s retail outlet needed to be a new sort of fish shop – a place with “a welcoming environment, where people wouldn’t be intimidated”.

Part and parcel of this was their recruitment policy. “We look for nice people, jolly people with a bit of personality. People you wouldn’t be afraid to ask a question of,” he explains.

And that cold, white, antiseptic look typically found in your average fishmongers? At the Monkstown Village branch, this has been banished in favour of a stylish and eclectic nautical vibe. It incorporates lobster crates and other pieces of kit with maritime associations. 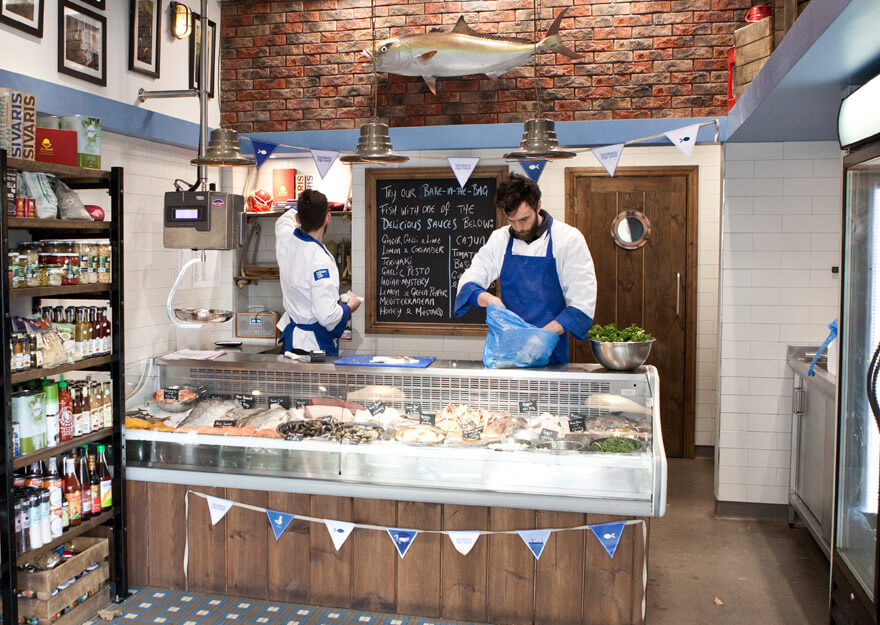 This was all part of Graham’s master plan. He says one of the keys to taking on multiple locations is “making people remember” where they bought what they eat.

There’s plenty of clues here as to how George’s Fish Shop, despite being born in a recession, has flourished. But for all the modern vibes and hipster graphics, there’s something refreshingly old-school about their startup story.

A throwback to bygone shopping habits

Part of the appeal of Stepaside as a location for the shop’s newest branch was the fact that there’s already a butcher and a greengrocer there. “It’s a village with its own tradition and community feel,” says Graham. It’s the ideal setting for finding shoppers who want local produce.

Regarding the county as a whole, Graham also reckons that Dublin is a “blank canvas for entrepreneurs” – in a good way.

People in their 30s and 40s are only beginning to eat it now.

“Dubliners are willing to support new businesses. We like exploring. We like new places. There’s a flurry of new businesses opening,” he says. “So much that’s new and exciting is happening here now’.

And after generations of coming last in the protein popularity stakes, fish is having a bit of a moment here too.

“It’s a growing market,” according to Graham. “People in their 30s and 40s are only beginning to eat it now. People are interested in the health benefits too. Young mothers who wouldn’t have eaten it as children are now buying it for their own children. And they’re… happy to ask questions.”

Before we let him go, Dublin.ie had a few more questions that needed an answer:

Dublin.ie: How would you cook it?

Dublin.ie: What fish deserves to be more popular?

Dublin.ie: And how would you cook that?

Rest assured, if Graham’s got any plans for opening a restaurant, Dublin.ie readers will be the first to know.

For more information, check out the fine fare on the shop’s website.

A Q&A with The Fumbally Café We visit The Fumbally Café on Fumbally Lane to speak with founder, Aisling Rogerson, about her experience of working at the busy community coffee shop. What is The Fumbally? It’s a popular Dublin 8 neighbourhood café where the emphasis is on all things wholesome, healthy, ethical and delicious. They’re experimental too, making their own fermented drinks. Then, there’s also The Stables – their complementary event space where yoga classes, food workshops and other cultural happenings take place. It also houses an extra kitchen where the café’s chefs can play around with new di

Attention Dubliners: we’re incredibly lucky to inhabit a city with such foodie inclinations and a culinary largesse. Right now, Dublin offers an exquisite blend of Michelin-starred fare, outstanding street food, hipster eateries and friendly local restaurants. And let’s not forget the evolution of our drink culture either. We were once a city of avowed tea drinkers and pint lovers; we’re now as au fait with cocktails and customised artisan coffee blends as any seasoned mixologist or barista – and loving them. We’ve also fully embraced the juicing phenomenon, but still find time for a cuppa. Or three.