It’s fair to say Mattress Mick is something else.

You are probably familiar with the viral videos and with the persona of the madcap mattress salesman. Are there any rules to what they do? “We want to break the rules” says Mick.

Yet within the madness there is something that resonates with us. And it’s this which makes Mattress Men, the new behind the scenes documentary, such a compelling prospect. In part, the film gives us the backstory. How did this madness come about? How could one man become so inextricably associated with mattresses and great deals? Mattress Men allows us to step back from the persona to see the creators at work.

We want to break the rules

Dublin.ie were fortunate enough to be able to interview Mattress Mick and Paul Kelly together. Paul’s a key figure in the story. The film is as much his history as that of the mattress salesman. While Mick is the face of the enterprise, Paul is the man behind the camera. He’s directed and scripted all the videos. But the persona, they diplomatically state, was a joint idea. 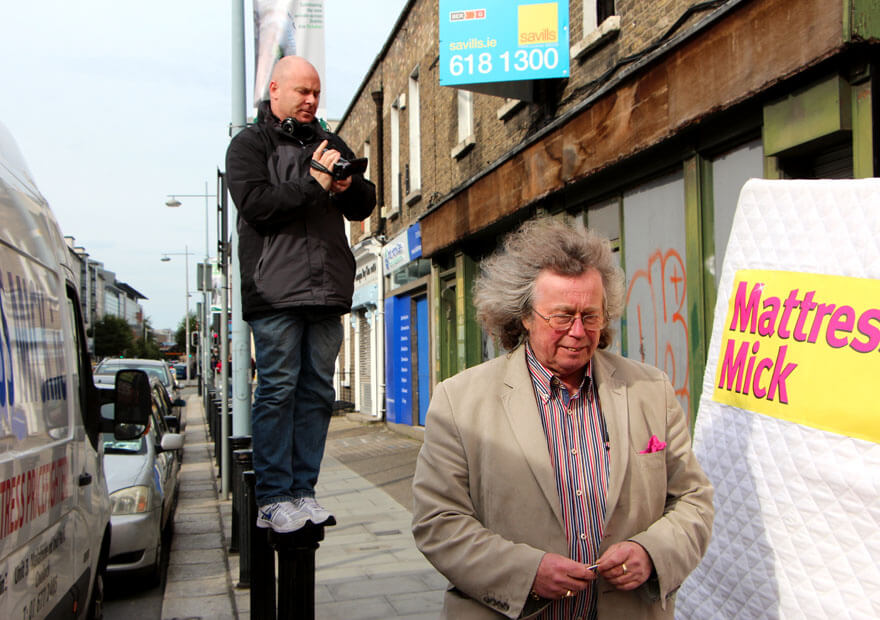 When you speak with the two men you get the sense of a fruitful creative partnership built on trust and respect. And giving up isn’t in their vocabulary: “We scrap… and we love one another”. Underdogs in the truest sense. So far, a very Dublin story. And it’s very Dublin. Paul resides in Coolock and Mick in Clontarf. But Mick was reared just behind their store on Pearse Street. It was a property originally purchased by his Grandfather, which eventually became a drapery story run by the family.

So how did the Mattress Mick phenomenon start? This story goes back to the recession when salesman Michael Flynn was finding things difficult. Yet Mick had an idea: a bed-based store, and enough experience to know it could work. Paul had his own troubles at the time, some financial and some personal. However, when they first decided to work together, they knew there was something special.

We scrap… and we love one another

Apparently there was a lot of learning as they went. Paul wanted to “American-ise” Mick, but this had to be refined for an Irish audience. This is how they decided to leave in the mistakes, to keep the ad-libs, and keep things generally unpolished. And so a style developed – “People can relate to the mistakes” says Mick. And relate they did. After only a couple of years of working on a shoestring marketing budget they noticed they were getting more attention than they could have hoped for. Not many mattress stores can boast mention in a Stephen Fry tweet.

One day I hope to meet Mattress Mick. I think we’ll have lots to discuss. Mattresses for example. And prices. pic.twitter.com/1aKChzZXWq

And how did the film come about? It first came through a chance meeting between Paul and director, Colm Quinn. Colm, as it happened, was a big Mattress Mick fan and after seeing the Pearse Street showroom, immediately knew there was a story to be told with two captivating characters. It was meant to be a 15 minute short film, but this was quickly shelved. The story was much bigger, and it would take three years to tell. Did they ever regret agreeing to be part of such a project? “No, this was the right path” says Paul. And there’s the feeling there is more to come.

What’s next for the mattress men? Paul has lots of new ideas, and scripts they have yet to film. Even one that’s curiously titled ‘The Wizard of Mick’. It has its own theme song, which is sung for me off-the-cuff by Paul. “Two lunatics”, Mick reassures me. There are no rules. There’s the chance to expand across Ireland, while the Mattress Mick name has become reasonably well known among the Irish scattered across the globe. They’re not ruling anything out.

But Mick is happiest with their sales. Their creative efforts are now seeing results. And they’ve been able to grow their customer base all across Dublin. This is a story you will want to see on the big screen.

Visit www.facebook.com/mattressmen/ to find out more about the movie.

We asked two theatremakers, Louise Lowe & Owen Boss, to talk about their work and how it’s shaped by Dublin and its inhabitants LL: Together, we run a company called Anu Productions. We cross-pollinate between theatre and visual arts to create experiences – artworks, really – that will ask people to question themselves within the work. And the work that we make is about the history of contemporary life, in lots of ways. A lot of the time, we’re asking people to re-engage with a space, or a place or a community. And then to make up their own minds. We never tell people w

Croke Park. It’s not just a stadium. As Tim Carey, author of Croke Park: A History says, ‘More than perhaps any other sporting venue, Croke Park represents something that is beyond sport’. The place has always had another agenda – one that’s intimately connected with the birth and evolution of a nation. ‘It is freighted with historical significance’, says Carey, ‘from the naming of the stands after various figures associated with the GAA to the momentous historical event of Bloody Sunday. Perhaps no other stadium in the worl