Stand in one spot for long enough and you get to witness some pretty interesting stuff.

The ground rumbles beneath my feet with the Luas works and its accompanying symphony of pneumatic drills and heavy machinery, played expertly by men in high vis jackets and hard hats. Lorries laden with cement and rubble pass left and right. Double decker after double decker stream from the quays onto the bridge. The middle-aged woman weighed down with Arnott’s bags runs past me for the stop, panting. Her bus is pulling away. She’s distraught. Maybe she has some sentimental link to that particular bus; another one with the same number is waiting at the lights on O’Connell Street, a minute away at most.

I’m standing beneath one of the street lamps. There are another 10 on the bridge. I’ve seen them before. I remember them from Clery’s bags. But I’ve never really noticed them. How beautiful they are, how ornate. I guess that’s part and parcel of being one of the most arterial routes in the city. The bridge is simply a path from A to B, from north to south. It’s not a destination in its own right; there are no shops here. Or are there?

I cross to the island, what I’ve just now dubbed the strip of footpath splitting O’Connell Bridge in half, for a closer look at the two men working the stalls on the western footpath, the one connecting Aston Quay and Bachelor’s Walk. I cross this bridge every day of the week, and yet the last time I took stock of them was probably passing them with an Abrakebabra in hand after one too many Club Oranges, one Friday night, years ago. 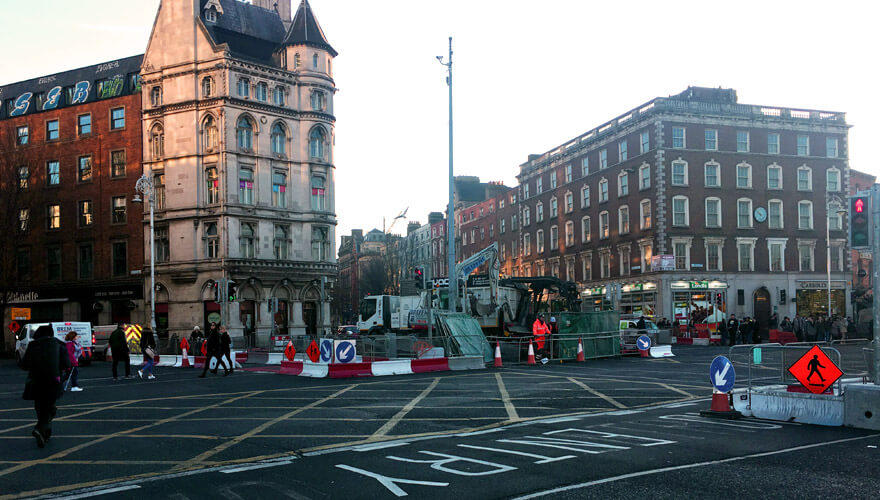 Pedestrians throng the two main footpaths, east and west, bumping into one another like grumpy dodgems. Only those in the know, the ones who seem to have noticed it, use the island. There go the police again, in that fancy schmancy new BMW estate. I swear they’ve crossed over half a dozen times in the six minutes I’ve been here. Next time I see it, I wonder will it look that shiny and new. Showing off, they are.

I look across to the River Bar at the mouth of D’Olier Street. 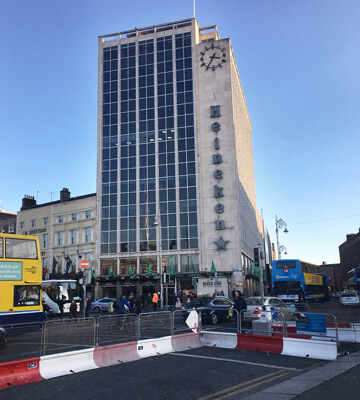 There may be a Heineken logo climbing the building above, but it will always be The Harp to me. Signs of the times, huh? Speaking of, I turn around and take in the remains of the Nokia sign, someone else’s name now squatting in its partly dismantled structure. On the opposite junction, I look for the orange Irish Permanent logo, even though I know it hasn’t been there for years.

I reach the southern tip of the island and the soundtrack shifts to the inescapable dicca-dicca-dicca-dicca-dicca-dicca of the pedestrian crossing. I do as it tells me. I cross. The two chaps peddling the medals, name chains, patches and badges on their stalls pay as little attention to me taking pictures as passers-by do to their wares. I’m engulfed by – I’m not exaggerating here – over a hundred students speaking Spanish. I come up for air, only to be swallowed by another twenty schoolgirls in grey skirts and jumpers. It’s the middle of January; how are they not freezing?

I escape to the shores of Aston Quay to take a picture, and a breath. I may have just spent 15 minutes here, but according to the clock on the outside of Ballast House, where it’s perpetually nine minutes to ten, on O’Connell Bridge, time stands still.

If you want to learn more about O’Connell Bridge, make sure to check out bridgesofdublin.ie