We all know Grand Canal as the home of Google but unbeknownst to many, tucked among the tech giants is a building where ancient crafts are still practised, THE DESIGN TOWER. The Tower’s seven stories of studios play host to jewellers, fashion designers, conservationists and more.

Anne O’ Mahony creates made-to-measure pieces as well as costumes for film and theatre, including The Gate’s recent production of The Constant Wife. She has previously designed costumes for the Glyndebourne Opera.

“I’ve been here 11 years now and I love it.” The Design Tower “is an interesting place to work. It’s nice knowing the other people working here and hearing about what they’re working on.”

Anne’s bright workshop fills with light. As she explains the process of her craft the sunshine shining on the tools of her trade: scissors, needles, pins and measuring tape. 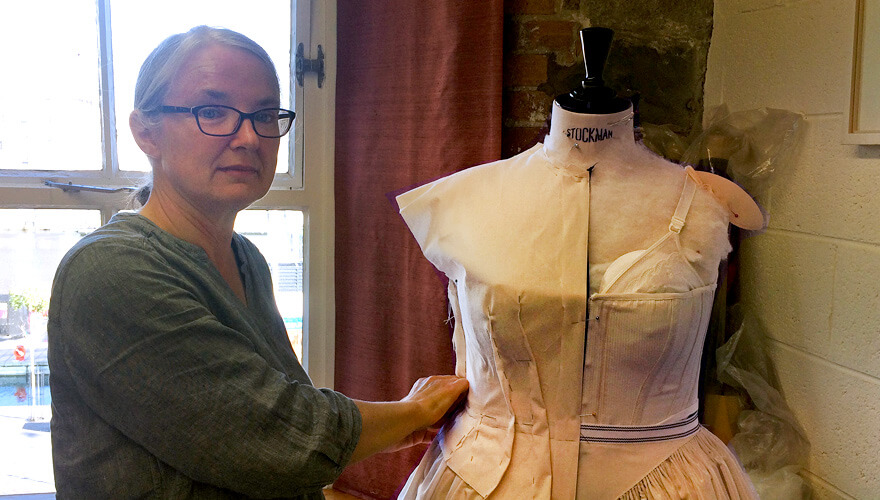 “Creating a custom-made garment can be a slow process, it’s not immediate. A lot of the time my customers cannot find what they are looking for in the shops. I like people to bring an idea, an image or something for us to get started on. I’m not a mind reader”, she says with a smile.

“After chatting to the customer about what they want I make up a toile in calico for fitting. The next step is to show the customer fabric samples and if our ideas correspond I’ll start to make the garment. We might have three or four fittings after that.”

“Making costume for theatre and film is a much quicker process. It’s usually fairly last minute. You get one fitting and you have to get it finished and pray that everything will be ok.” 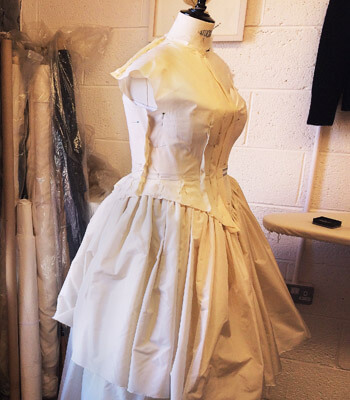 Anne enjoys working with natural fabrics “I’m happy with a simple piece of linen, cotton, or wool. I like fabrics with a bit of texture to them.” but every now and again an outlandish project comes up.

Anne remembers with a chuckle a costume she designed during her time with the Glyndebourne Opera. “I made a twelve-foot mother’s costume. It involved a lot of cooperation with the props guys. They had to make a platform for the singer to stand on.”

Another unusual request came via letter from Bermuda. A woman who was getting married for the second time in Ireland sent Anne a letter with a picture of what she wanted. “I didn’t know whether to take it seriously”, Anne says, a letter from Bermuda is not an everyday occurrence. But the customer was indeed serious and did get married in Ireland in the dress that Anne designed for her.

Looking out on the ever-changing view of Boland’s Mill outside her studio window Anne reflects on how much Grand Canal has changed. “There used to not be a lot around, there wasn’t even somewhere to get a sandwich. There has been a lot of change in the area… Sometimes I wish it wasn’t changing so much. “

The landscape of Grand Canal is indeed changing rapidly but The Design Tower has been a constant since 1978. Today it remains a solace for craftspeople, a place where they can create, collaborate, share, sell and exhibit their work. Dublin.ie hopes that it will always remain so.