IADT, the Dublin college by the sea.

IADT is Dublin’s Institute of Art, Design and Technology and inside the walls, it’s alive with ideas, creativity – and a girl who hula-hoops every single day!

The college is situated in Dún Laoghaire – Dublin’s picturesque coastal town – and it’s home to 2,300 students and staff. Being only 12km from the city centre means “the students have the option of hanging out in Dún Laoghaire or making the trip to the city centre”, says Students’ Union president Alice Hartigan. Conveniently, it’s on the 46A bus route, the one they voted Dublin’s favourite bus route of all time: check out the views from the top deck!

Dublin.ie: Being close to the sea is a real bonus for a college. Is this availed of by the students?
Alice: Absolutely! It’s not uncommon for students to go down to Dún Laoghaire Pier and grab an ice cream in Scrumdiddlys. Dún Laoghaire is actually a lovely little town and has plenty to offer to students, from pubs to good food – and the social life is there to be had! 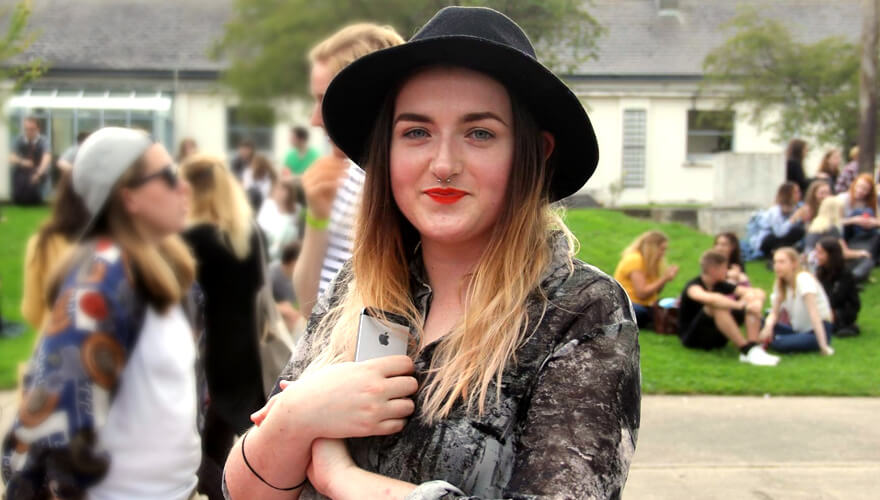 Dublin.ie: Art colleges are notorious for unexpected activities in the corridors. Is there anything fun taking place around the college?
Alice: Definitely! There’s a girl here who hula hoops every single day in the outside courtyard or in The Chapel – which is our student space. Just the other day a group of students were cutting each other’s hair. Art students definitely bring an interesting vibe to the college. Just seeing people walk around with their projects is quite amazing.

Dublin.ie: Are there any unusual clubs or societies in IADT?
Alice: Someone has set up a cat society this year, which I thought was quite funny! There are loads of societies here: Drama, Debate, Scouts, QSA (Queer Straight Alliance), Role Playing, Poetry, Free running, Zumba! There’s something for everyone here, which is fantastic! Societies really changed my life in IADT and are probably the reason I ran for the position in the Union.

Dublin.ie: What makes IADT so different from other colleges in Dublin?
Alice: It’s a real community. It’s small enough to get to know everyone and feel at home but there is such a variety of people and interesting societies that you are always making new friends. You aren’t sitting in a lecture hall with 500 other students, you have a 30 person class and it is more personal and comfortable than bigger colleges and universities.

Dublin.ie: Is there a local pub that everyone hangs out in after college or do students usually make the trip to the city centre?
Alice: There’s Baker’s Corner, many students go to for the good lunch deals and a few drinks – it’s great having Baker’s so close by. Many of us are so involved in college life and societies that loads of students hang out on campus after lectures. When we have big events we will usually rent out a venue in the city centre, for example our freshers’ ball was in The Academy this September and we had about 500 students there. A lot of students rent outside of the Dún Laoghaire area, i.e. in Dublin City – and because of this many students will socialise in the city centre too.

A college with a hula-hooping girl, a cat society and the sea only a stone’s throw away? I think it’s worth jumping on Dublin’s favourite bus route to see for yourself.

DCU is growing. The young university is spreading its wings across the north of Dublin, with campuses in Glasnevin and Drumcondra. As a result more eager students will be adopting these areas as their new home. So, what can students coming to study in the New DCU expect from this part of our fair city? Student life is about balance. A rounded education does not just happen in a lecture hall. Libraries, books and essays may make up a large part of the university experience but they are not the be all and end all. New friends, new experiences and new locals are all waiting to be explored.