The Getting Started programme turns older Dubliners into webheads.

Let’s be honest; the internet can be mildly intimidating (if not positively terrifying) at the best of times. What to do, then, if you’re of a generation unacquainted with the World Wide Web? Recent statistics suggest that just over 50% of people aged over 60 in Ireland have never used the internet. The problem, ultimately, is that seniors can feel a type of ‘digital isolation’. The solution may lie in good old-fashioned human interaction: people together, in a room, exchanging knowledge. Call it a digital dig out.

One crisp spring evening in old Dublin town, a small, dedicated group have gathered in Beggar’s Bush Court, a housing complex for older people, to interface with the internet. The Getting Started programme is designed to help those in danger of being caught on the wrong side of the ‘digital divide’. The key feature of the project is one-to-one tuition on the use of computers, digital tablets and mobile phones. All the tutoring is done by trained volunteers, using materials developed specifically for older learners.

“What we’re doing is making sure that people aren’t left behind when it comes to the web” says Robert Carroll, of Age Action, who co-ordinates the project. “There’s a byproduct of that; two people who would otherwise never meet get to spend 4-6 hours together, over a couple of weeks. That, to me, is one of the most basic parts of community development: meeting your neighbours, and others from the surrounding area. The real reward is seeing the groups learn and develop in ways that they themselves maybe thought they weren’t able for.” 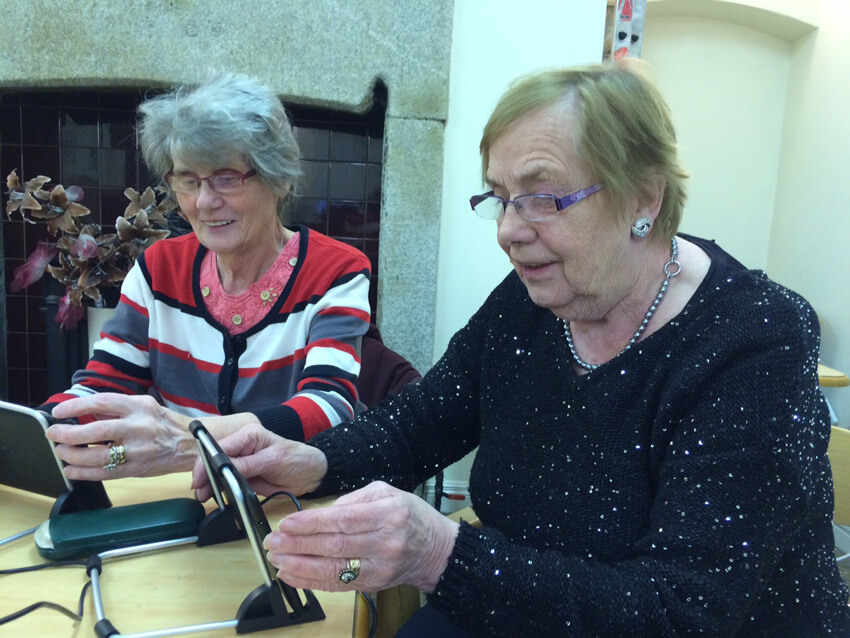 In 2015, Getting Started (the result of a partnership between Age Action and Dublin City Council) held classes in housing complexes in 14 different postal areas across the capital. Sessions are open to all, not just residents of housing complexes, with tutors encompassing an eclectic variety of ages, nationalities and skillsets. Occasionally, the students themselves return as tutors, passing on knowledge garnered.

“This is only my first stint doing this,” says tutor Fiona McGinley, “and my first time doing any kind of teaching. I’m not an expert by any means, but it’s great to be able to pass on what you know. It’s been an absolutely brilliant experience. You have a cup of tea and a chat and then sit down and work through the internet for a couple of hours. You hear so much that’s bad about the web, but then you come here and see people learning to use it for the first time, and it makes you appreciate all the information we have at our fingertips. I work with a guy called Luke, and we’re having a lovely time. We learn from each other.”

Tonight, the room is buzzing, and this particular gang of silver surfers are gamely embracing the new technologies. “The tutors are fabulous,” says Anne Stafford, a resident of Beggar’s Bush Court. “I always used to watch my grandchildren using the internet, and didn’t have a notion. Now, I’m getting the hang of it. I have their hearts broken (laughs), but they’re very patient.”

Derek O'Connor
Derek is a writer and filmmaker, with a passion for popular culture, tech and Dublin. Find him on Linkedin and (occasionally) Twitter: @oldderekoconnor.

What CONNECT does has the potential to impact on all of us. As well as the intellectual and academic importance of the research done here, its practical application is just as relevant. According to CONNECT's Andrew O’Connell, there is a strong culture here of commercialising the research, taking it from the lab and turning it into a commercially viable product or service.

I’m 13 years old, and I’m into coding. I went to my first coding club in Coder Dojo when I was 9, my Mum heard about it from someone and said that I should just give it a go, and from the first day I just loved the fact that you could create anything from coding. Coder Dojo runs classes that teach young people how to code for free, there are always mentors there to help you if you get stuck with anything. I think that they’re great, they have gotten a lot of young people into coding, and into tech. If you’re really creative, and you have a passion for it, then you’ll get good at coding. I lik

Young people are the future. It’s why we cherish them and invest in them. That’s not to say that everybody would necessarily be thrilled at the prospect of 20,000 students arriving on their doorstep, which is exactly what will happen at the Dublin Institute of Technology’s formidable new Grangegorman Campus. Thanks to meticulous planning and a comprehensive vision of what the whole area will become, however, this dramatic swelling of Grangegorman’s population is being anticipated with something resembling excitement.