Glasnevin cemetery is the dead centre of Dublin, with 1.5 million people buried there. In fact, there are more people below ground in Glasnevin than above ground in all of Dublin.

This is no ordinary cemetery, with a list of historical figures buried here including Michael Collins, Eamon de Valera, Charles Stewart Parnell and Arthur Griffith. Conor Dodd, Historian at Glasnevin, and Luke Portess, Head of Digital, tell us some of the lesser known, more unusual stories about Glasnevin.

Dublin.ie: The cemetery is a working cemetery, with funerals and burials on a daily basis, but there is also a museum which is a tourist attraction. How does this work having two completely different functions?
Luke: It’s really challenging. We have to take into account that everything we are trying to do has to mix in with families that are grieving. Everything is done with respect in mind. We are telling a story, the history of a cemetery and we don’t want it to be in anyway disrespectful. There is segregation for the funeral traffic and the tour buses. The café is used by tourists and families from funerals, but everyone seems to understand, and once within the walls of the cemetery there is a sense of respect. 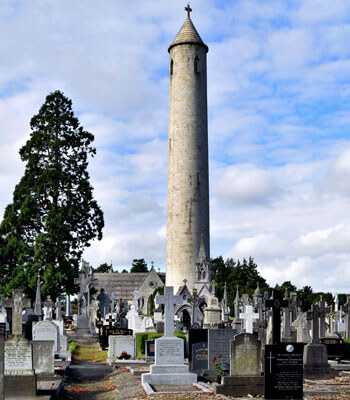 Dublin.ie: The tower is the focal point of the cemetery. Can you tell us more about it?
Conor: It sits on top of Daniel O’Connell’s vault, the Irish political leader who actually established the cemetery. The tower is just for him and nobody else – it’s his headstone. It is the tallest headstone in Europe. I have to get my measuring tape out now and check the pyramids too. In 1971, it was blown up by loyalists and the bomb put a crack about half way up the tower. The staircase in the tower was blown to pieces, but it is being reconstructed so it will open again to the public.

Michael Collins is the most visited, most popular grave in the cemetery

Dublin.ie: Although this is a place of history, it’s also a place of sadness…
Conor: Yeah, one of the really sad stories is the Seapoint Tragedy, it’s a bizarre story really. James O’Connor, a journalist for the United Ireland newspaper lived with his family near Monkstown. His thirteen-year-old daughter was out playing in the back garden and a nearby salt water pond had been drained that day. A number of mussel beds became visible. The family maid gathered them and cooked them for the family. The whole family ate them, except for the father who was out at the time. The father came back two hours later to find his whole family dead. One daughter survived. The coroner concluded that the pond had a number of sewage outlets leading into it and poisoned them. It became known as ‘The Seapoint Tragedy’. James Joyce, whose dad Stanislaus was at the funeral, talks about it in “Ulysses”, when Bloom says: ‘Poor man O’Connor’s wife and five children poisoned by mussels here. The sewage.’

Dublin.ie: Can anyone be buried here?
Conor: Anyone can be buried here; just buy a plot. It’s a similar price to any other cemetery, the cheapest grave here is €2,100. You’ll notice with some of the more famous characters, O’ Connell, Parnell, Griffith, de Valera or Collins, supporters of them in life wanted to be close to them in death, so would buy up the plots around them. It’s kind of like buying a house, the closer you are to a nice area or depending on what neighbours you have, the more you will pay for a grave.

Dublin.ie: Some visitors travel across the world to visit the graves of their historic idols. Have you ever found anything strange left on any of the graves?
Conor: Michael Collins is the most visited, most popular grave in the cemetery. You can tell by the amount of flowers on it. People leave odd kinds of mementos that are personal to them, such as photos of themselves. Brendan Behan gets a pint left on his grave every year on his birthday or on the date of his death. The Grave Diggers (a neighbouring pub) is probably gone mad about all the missing pint glasses!
Luke: It’s always a pint of Guinness, I don’t think he was too fussy though! 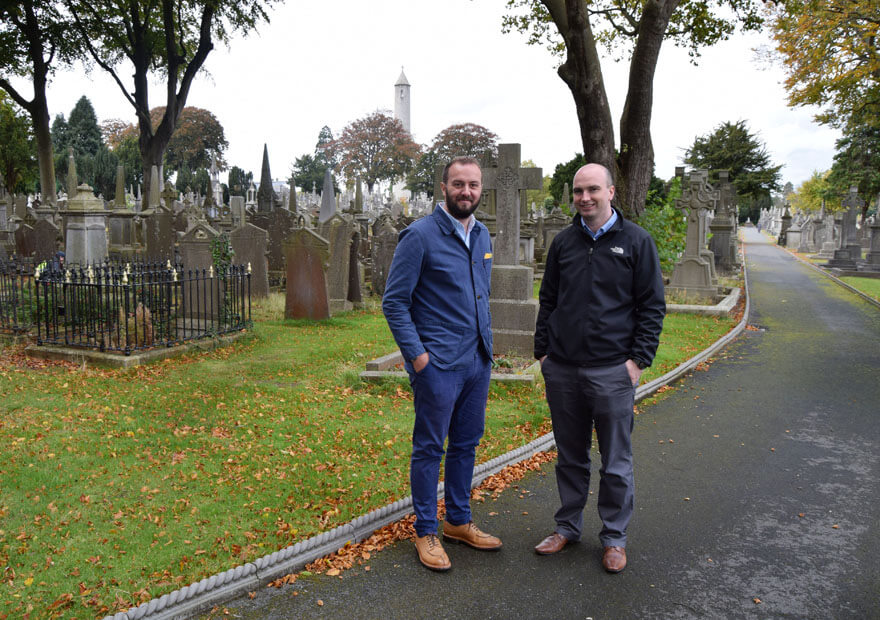 Dublin.ie: Besides all the historical stories, the cemetery must have some strange tales to tell too?
Conor: Probably one of the more unusual stories is a grave where a fake funeral took place in the 1800s, like an insurance scam. This guy pretended that his wife was dead, packed her away to England, filled a coffin with bricks, had a fake wake and brought the whole funeral up here to ‘supposedly’ bury her. Then, about 6 or 7 years later, she got tired of living in a basement somewhere and went to the police to say she was alive. They dug up the grave and sure enough it was a coffin full of bricks. She died some years later and she was actually buried here again.
Luke: She is the only person who made the registry twice!

I’ve been running the 1916 Rebellion Walking Tour for the past 20 years, bringing people around the city, showing them the sites of the Easter Rising. It’s not just for tourists, either. Sometimes these days you’ll get 95% Irish people on the tour. It’s great that we take a real interest in our own history, especially in this centenary year. I do feel like I have a responsibility to show the good and bad of Dublin; it’s a great city, and a safe city, and I like bringing people around and saying ‘This is where it’s really at…’. Places like Moore Street, that might

DCU is growing. The young university is spreading its wings across the north of Dublin, with campuses in Glasnevin and Drumcondra. As a result more eager students will be adopting these areas as their new home. So, what can students coming to study in the New DCU expect from this part of our fair city? Student life is about balance. A rounded education does not just happen in a lecture hall. Libraries, books and essays may make up a large part of the university experience but they are not the be all and end all. New friends, new experiences and new locals are all waiting to be explored.