An introduction to the districts of Dublin

The River Liffey flows through the centre of Dublin dividing it in two. Traditionally, the north side of the river was home to the city’s working class residents, while the south side was associated with Dublin’s middle and upper classes. However, this is changing as neighbourhoods like Smithfield, Stoneybatter and Clontarf to the north become gentrified.

Today, the county would be more accurately described as having a west-east division. Although there isn’t any river drawing a line between the two areas, the east side of Dublin is generally considered to be more affluent – particularly along the coast. 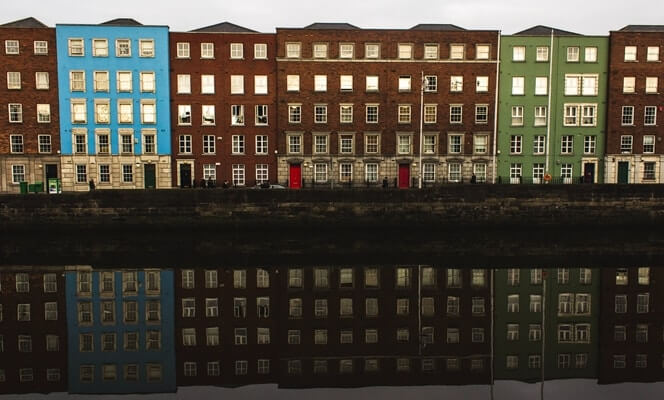 If you plan to live in Dublin, it’s also worth noting that many areas are still referred to by their old postal district numbers. The even numbers indicate an area to the south of the River Liffey, while an odd number refers to an area on the north side. For example, Dublin 8 and Dublin 4 are both to the south.

The following areas are some of the most popular places to live in Dublin. They are located near the heart of the city:

The IFSC and Dublin’s Docklands

In 1987, the government established the Irish Financial Services Centre around the waterfront area of Custom House Docks. Its aim was to centralise a range of internationally traded financial services, including banking, fund management and insurance.

Over time, the Docklands grew as an expansion of the IFSC. Over 500 firms now operate within this area, including more than half the world’s top 50 banks and top 20 insurance companies. It is home to technology leaders like Google, Facebook, Twitter, Accenture and Airbnb too.

In terms of cultural attractions, the area is home to EPIC The Irish Emigration Museum, The Jeanie Johnston and the Bord Gáis Energy Theatre. It is also the testing ground for Dublin’s innovative smart city project too. 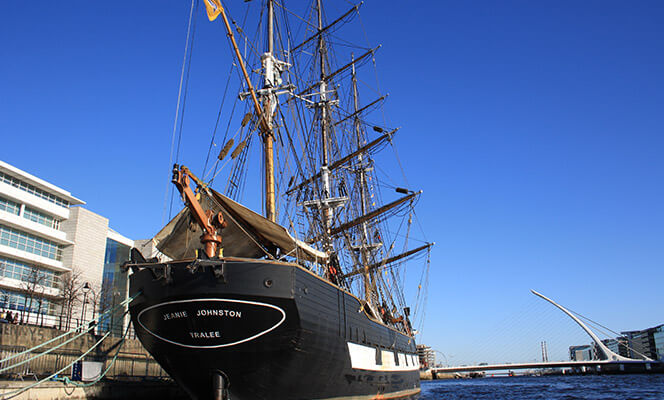 Back in the 17th century, Smithfield was a marketplace for trading livestock and other goods. Today, it offers a central location, a stop on the Red Luas Line and a wide range of independent establishments like the Light House Cinema, Token, Generator Hostel and the Jameson Distillery. So it’s no surprise that accommodation in this area is in high-demand among young professionals who want to live in a vibrant and well-connected place. 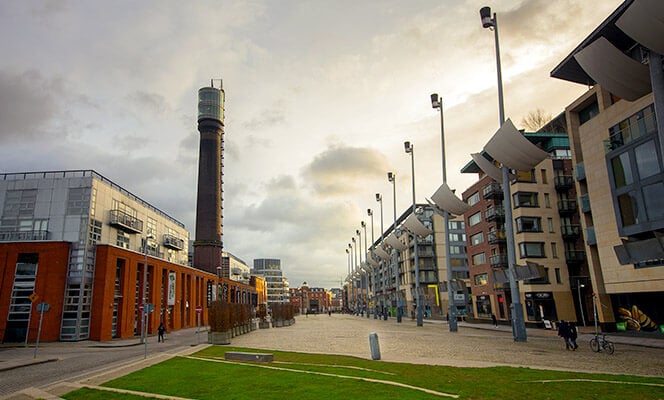 In Dublin’s north-west inner city, Stoneybatter is an area that has undergone a renaissance in recent years as its popularity exponentially rises. Built up around Manor Street, it has kept its village vibe with a weekly farmer’s market. But it is also seeing an increase in great restaurants, craft pubs and cafés. One survey also suggests that it has one of the largest LGBT communities in Ireland.

All this makes Stoneybatter a great place to live and an attractive Dublin neighbourhood for first-time buyers who want to reside in a flourishing area.

One of its claims to fame is its association with beloved Dublin soccer team, Bohemians, which play locally at its home ground in Dalymount Park. A short walk to the neighbouring Dublin suburb of Glasnevin will bring you to the National Botanic Gardens and Glasnevin Cemetery Museum too. The city centre is also a stone’s throw away.

Billed as where old Dublin meets new Dublin, the Liberties is a beloved and historic area at the heart of the city.

At St Audoen’s Church you’ll find some of the original stone walls that marked the boundaries of medieval Dublin. Today, The Liberties is also home to modern attractions like the famous Guinness Storehouse and the Vicar Street music venue. The spectacular John’s Lane Church comes complete with Harry Clarke stained glass too. It’s no wonder that over 23,000 residents also live here. 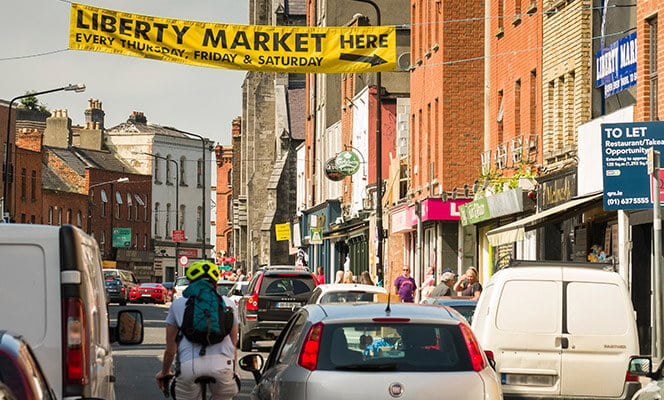 Living in Portobello will place you right in the thick of the action. It’s a five minute walk from Camden Street – one of the south side’s main thoroughfares. The ever-popular Portobello area also houses cultural centres like the Irish Jewish Museum and Bernard Shaw’s birthplace, as well as pubs and restaurants like Brother Hubbard and The Lower Deck at Portobello Harbour along Dublin’s Grand Canal.

Thanks to Portobello’s short distance to the city centre and the easy access provided by the Luas Green Line stop at Harcourt Street, it offers all the other benefits that come with living in Dublin too.

So what are the best places to live in Dublin?

All six locations mentioned above make great places to live. But accommodation can be especially hard to come by in these central areas. (Although lots of student accommodation is currently being built in some of them.)

When looking for places to live in Dublin, a lot will also depend on your budget. Dublin property prices across letting and sales are at an all-time high. As a result, the cost of living in highly sought-after Dublin neighbourhoods has grown. So you may need to consider Dublin’s suburbs, the wider county or even a neighbouring county when looking for accommodation.

Other Dublin neighbourhoods and suburbs to consider

Outside of the city’s core, there are many more popular neighbourhoods. For example, there’s Ranelagh, Rathmines, Rathgar, Islandbridge, Ballsbridge, Harold’s Cross and Sandymount to the south, as well as Glasnevin, Drumcondra, Clontarf and Cabra to the north. Although these Dublin neighbourhoods can be expensive to live in too.

A little further out in both directions, popular Dublin suburbs include Dún Laoghaire, Portmarnock and Malahide on the coast. There’s also great inland locations like Ashtown, Dundrum, Rathfarnam, Kimmage, Chapelizod and Carrickmines too. 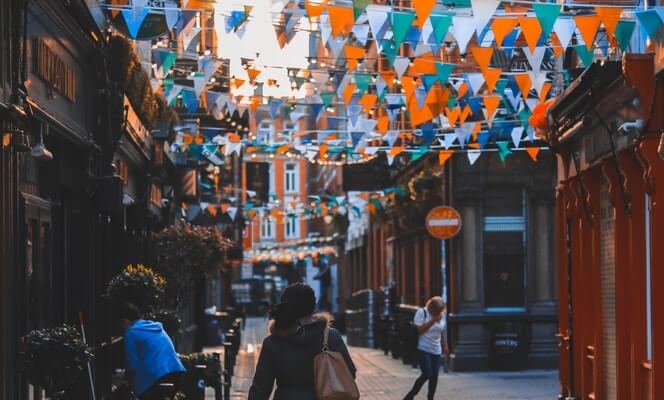 The suburbs are well-connected to the city centre by numerous public transport routes and are often well-serviced by schools, shops, restaurants, gyms and healthcare centres. Most areas of Dublin are pretty safe to live in too.

Plenty of people who work in Dublin city also live outside the capital. It’s not uncommon to commute by bus, train or car from the bordering counties of Wicklow, Meath or Kildare. This option may make sense for parents who want to raise their families in a quiet Dublin suburb. Whereas single people may prefer the hustle and bustle of living in a city centre location like Grand Canal Dock or Smithfield.

How to make a decision?

After affordability, you should choose a place to live in Dublin by considering how you plan to get around the city.

If you plan to work in the airport in north county Dublin, for example, travelling there from a southern suburb like Carrickmines would be a pain. However, a direct bus route runs to the airport through both Drumcondra and Phibsboro. So they would be good choices.

If you have to rely on the bus network to get to work or college, it makes sense to live somewhere served by a relevant route. But if there’s a Dart line near your new office, this will open up all sorts of options as it stretches deep into the Dublin suburbs and never gets caught up in traffic.

Read more about your commuting options on our page about transport in Dublin. You should also find our guide to accommodation in Dublin helpful.

Dublin city stretches across 115km², with the county itself covering 921km². While it’s not the biggest area, as Ireland’s capital city, it has a lot going on – which is why it’s split into four local authorities: Dublin City Council, Fingal County Council, South Dublin County Council and Dún Laoghaire-Rathdown County Council.

Dublin’s legacy stretches back over a millennium of history, change and development. The first known settlement here was Áth Cliath, which took its name from a major ford across the tidal River Liffey. Around the sixth century, a monastery named Duiblinn (Irish for ‘blackpool’) was founded, where Vikings eventually arrived. After the Anglo-Norman invasion in 1170, Dublin became the capital of the English Lordship of Ireland and was populated extensively with settlers from England and Wales. The early 16th century was a turbulent time when King Henry VIII’s split with the church led to the closure of monasteries and the destruction of religious institutions with papa