The bedding in your local park, the roundabout at the end of your road, the planter on the quays: Dublin’s famous for its bursts of floral colour.

Any journey you make in the city is likely to take you past some cheery display. But did you know that every plant you see comes from a single nursery, lovingly grown from seed to flower?

St. Anne’s Park on the northside of the city is an embarrassment of riches. Its the second largest public park in the Dublin area, the grounds of the former estate of Lord and Lady Ardilaun (hold a golf course, sports fields, trails, walks and gardens, architectural follies, and some elaborate Victorian red brick stables (home to Olive’s restaurant and a popular food market every Saturday). Every July there’s a famous Rose Festival too. But we’re here to see something entirely different; something that the thousands of visitors who come here every week probably don’t even know exists.

Spring bedding begins in August and summer bedding commences in March, so we work quite far in advance of the public seeing them on the streets

Dublin.ie is with Mick Harford, Senior District Parks Officer, Dublin City Council. Mick has an extensive list of responsibilities on the north east of the city, but one of his lesser-known tasks is running a plant nursery, and no small one at that. He leads me through the rose gardens, past some beautifully maintained herbaceous borders that line the path to the clock tower, until we reach a rather unremarkable and modern gate. But beyond it is something entirely unexpected: 15,000 square meters of polytunnels and greenhouses that pump out roughly 350,000 plants and flowers every year, the ones that adorn our city streets in every season.

Potting young plants for next season

Our tour starts where the plants do, in a small, modest germination room where the seeds are prepared for planting. Mick tells me how it all begins: “Seeds are sown as per their cultural requirements. They all need specific temperatures or lengths of light. This is closely controlled so that just enough seeds are germinated to match the weekly production deadlines.”

We move on to the potting shed, but not like one I’ve ever encountered. A noisy machine clatters out small blocks of compacted compost with a pre-drilled hole to hold the new seeds. At a nearby bench, the nursery’s three full-time staff are furiously placing seeds into the blocks and planting them into small plastic plots. Other plants are being re-potted to facilitate their new growth. I ask Mick how many are planted or potted in a day. “That depends on the varieties, the species and the block size, as well as how many people are available on the day as we may have one part-time staffer, augmented by horticultural students on placement from various Colleges. But we average about 10,000 to 15,000 per day. Spring bedding begins in August and summer bedding commences in March, so we work quite far in advance of the public seeing them on the streets.” 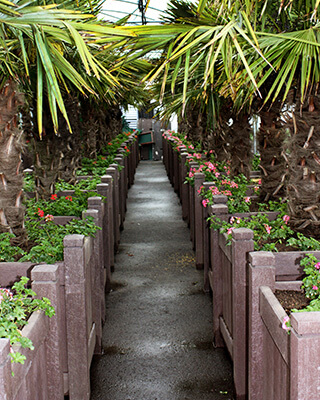 There can be up to 200,000 plants in various stages of growth within the walls of the nursery at this time

After this, the plants are transferred to the enormous glasshouses where they’re brought to maturity throughout the year. The scale is what strikes you. Even though they have yet to flower, there are still large blocks of colour from the foliage on the raised shelves within this hothouse environment. I wonder how many could be growing at any one time. “Although there isn’t really a quiet time, we’re busiest in late spring as the summer plants come to maturity. There can be up to 200,000 plants in various stages of growth within the walls of the nursery at this time.”

After a walk through the almost never-ending shelves of geraniums, marigolds, petunias and begonias, we come to long, neat rows of planters, each containing a palm at its centre and surrounded in a blaze of colour. Somehow, I think I recognise them. Mick confirms my suspicions; “You’ll see these down on the quays in the city centre. We replace them twice a year. Spring planters come back to the nursery in early June, replaced by summer planters the same night at an ungodly hour. Summer planters come back late autumn, depending on how the weather was over the season, replaced with spring planters, & the cycle starts all over again!”

As Dublin City Council vans whizz in and out of the yard to collect what they need, Mick glances at his watch more than once, and I realise he has a lot to be getting on with. At this time of the year, he’s a busy man, and not everyone is lucky enough to get this peep behind the curtain of The Flower Factory. But the next time you see the fruits of this little corner of St. Anne’s Park on your Dublin street, you’ll know exactly how they came to be.

Connor O'Hare
Connor is an advertising creative and writer who has now lived in Dublin longer than he hasn’t. His mother saw fit to give him two n’s, cursing him to a life of spelling his name aloud for anything even mildly official.
Update Cookie Preferences
Copy link
CopyCopied