I’m up at four in the morning. The first thirty years are the hardest! After that you’re just up and out. I tippy-toe out the door so I don’t wake the family. I’ve worked six days a week here for thirty years. My father worked here too. I love it.

There’s nowhere else in the city that is alive like this market at five o’clock in the morning. It’s bustling with characters, it’s got a heartbeat of its own at that time of the morning. And that’s uplifting. There’s a good bunch of lads there. They’ll stand shoulder to shoulder with you. We’re working under stressful conditions. This morning was two degrees. There was frost on the window, it was bloody freezing – that’s when the character comes out. I’ve got five layers on today. That’s for two degrees. You want to see minus two! 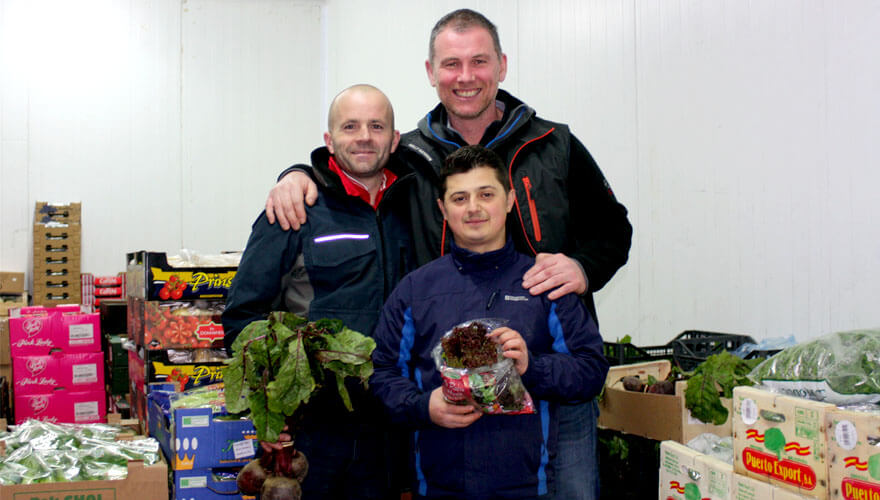 I’ll call my growers at two o’clock today. They’ll cut, they’ll harvest, they’ll pack, they’ll have the produce with me at five o’clock in the morning. They’d ask me ‘how much cauliflower can you sell tomorrow?’ ‘Is tomorrow a good day to bring over two pallets of carrots?’ And I‘d say ‘Yes it is!’ Why? Because the weather’s cold, people are making stews, root veg is in demand so bring it on.

I bring my daughter to the market sometimes. She’s seven and she’d buy and sell me. You try to educate them as best you can as to seasonality and what product is good at any given time of the year. Root veg is what grows in winter. And by its nature that root vegetable is warming. Salads in the summer time are cooling. So if you’re eating what’s seasonal it’s what good for your body.

Usually what’s in season is what’s real good quality and also because it’s in season, because it’s available, it’ll be affordable. When people are looking for an out-of-season product, especially chefs, they’ll find that quality isn’t so good. It might be imported from Peru or Mexico and the prices are going to be crazy. But in actual fact there’s a really good local product in our back yard. So many chefs are just blind to that. They’re not aware of what’s seasonal out there. They order off screens. When I started in the market 30 years ago, every good chef in Dublin would walk the market and touch and smell the produce.

There’s a lot of really, really good quality small growers out there that don’t have enough production for the big supermarkets. They’re smaller and they care. They’re often producing very small amounts. They come to me to find an outlet for it. And I’ll fill a few gaps in the small independent shops around Dublin. That produce is fantastic and I would have it from the field to the fork within 24 hours. That’s the difference between what we do in the market and what the big supermarkets do – it might take them a week.

Yum-yum, pig’s bum: the old bacon and cabbage? It really is a thing of the past. ‘Forgotten veg’ is what I call the veg that we’ve grown up on that is no longer used as much. Parsnips are the same. And turnips – I probably sell 5% of the turnips I would have sold before. But then there’s avocados, over these past ten years the sales of avocados must be up twenty-fold at least. Kale had its moment in the sunshine but sales have fallen off a bit now.

What do I feel about Dublin? It’s the best little city in the world. I’ve travelled the world, I’ve been all over, I’ve lived in Australia for 4 years. I’m, so, so genuinely glad to be home. But it’s only in the past couple of years that I’ve really started to love the place. It’s the people. People make Dublin.

The Dublin Flea Christmas Market is heading back for a third year in a row at The Point Village. From Thursday December 7th to Sunday December 10th the shopping centre will be transformed into a winter wonderland filled with over 100 stalls selling the flea market’s usual retro and vintage wares alongside Irish craft and design. Once again, the market is supported by Dublin City Council and Dublin.ie. We sat down with half of the four-person team behind Dublin Flea, Sharon Greene and Dave Dunn to find out what makes the Christmas Flea Market so special.