Pedestrians tend not to linger on College Green.

In its current incarnation, the area doesn’t lend itself to those great city pursuits of (a) meandering or (b) ambling. It’s a thoroughfare, on the way to somewhere else and if you stop it’s only to get a bus, grab a coffee or maybe do a little retail damage in Abercrombie and Fitch.

Change is afoot however, and the most recent plans for the transformation of College Green will provide a completely different experience of the heart of the city. It’s radical and it’s exciting. The entire area, reaching the width of the street from the Bank of Ireland building, is to be pedestrianised. 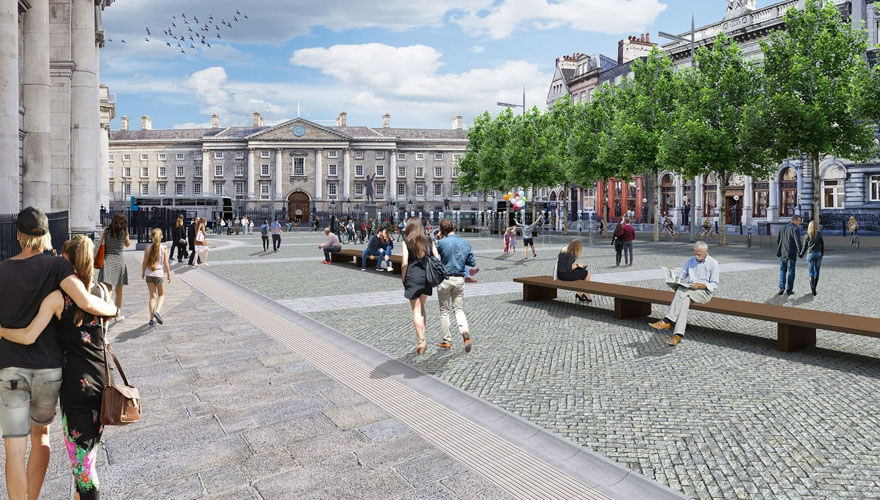 The challenge for planners from the outset has always been the conflict between developing the area as a progressive urban space and the (rather vital) need to keep the city alive with traffic moving through it.

“The key change in the proposal which has come now is that we had been pursuing a policy of trying to be all things to all people, for everybody to get a ‘bit’ – in which case everyone ends up with a compromise and being unhappy,” says Brian Swan, Deputy City Architect at DCC, who was on the design-lead side of things as a member of the steering group for the project. “What’s happening now, it’s being split on a priority basis so instead of trying to do something for everybody we’re following down through the priority list. The pedestrian comes first, then your cyclists then your public transport and then your private vehicles.”

Swan likens this reimagining of the city centre similar to the smoking ban, in terms of how that led to a new use of the streets outside pubs, cafes and restaurants. “It became a whole new level of experience. I always had the same sort of sense that sort of ‘Oh my God, if we take the traffic out of College Green we’re going to kill something…’ Whereas instead, once they can still get the city to work around it, the opportunities that it opens up is for a completely new way of experiencing the core of a city as a pedestrian, a visitor, a user of the city centre.”

Dublin City Architect Ali Grehan said that the proposed design for College Green was shaped following extensive consultation with the public and stakeholders: “The clear preference was for a pedestrian and cycle friendly open space. This College Green project is a unique opportunity for Dublin to reclaim an urban space of prime civic importance and of national and international significance.”

Previous plans hadn’t factored in the plaza being the size it now will be, and there were also concerns about College Green’s statues of Henry Grattan and Thomas Davis having to be relocated. With the new proposals, the moving statues issue is no longer relevant and without the significant traffic element going through it, a whole array of potential now exists for what the plaza could be and how it might look. 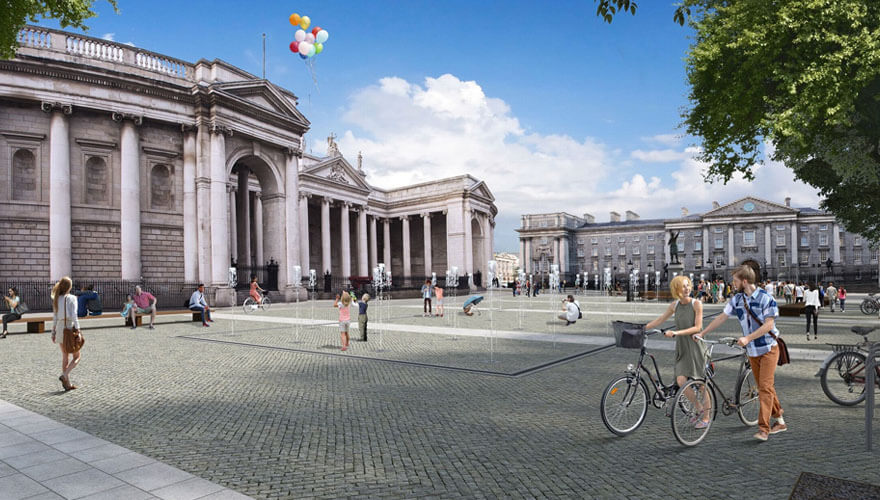 Could it become one of the most attractive spaces in the city? The next sixteen months will reveal all, but the portents suggest that this will be a significant – and potentially beautiful – next step in Dublin’s urban development.

Claire O'Mahony
Claire is a Dublin-based journalist who contributes to a wide range of publications including The Irish Independent and Image magazine. She occasionally reviews restaurants, and loves a good crime novel.
By using our website you are consenting to our use of cookies in accordance with our Cookie Policy
Copy link
CopyCopied