A Modern Master for IMMA

The afternoon is full of orange light and autumn leaves when I make my way down the path into IMMA (Irish Museum of Modern Art). Not that all this gentle nature would have been of much artistic concern to Lucian Freud, the new star of the show around these parts. Freud was a visceral painter of the flesh, fascinated by the heft of a belly or the sag of the skin. Every good painting requires a little bit of poison, he said.

IMMA’s new collection, The Freud Project, is comprised of fifty paintings and etchings on loan from private collections. The IMMA Garden Galleries are now the Freud Centre and there I meet Patricia Brennan of the Visitor Engagement Team who is happy to share some of her knowledge of the modern master.

Patricia tells me of the working visits Freud made to Dublin in the 1940s and 1950s. He considered Jack B Yeats the greatest living painter and came over here from London in pilgrimage. Here, he had a meeting of minds with Patrick Kavanagh and Brendan Behan and he painted alongside painter Paddy Swift in a shared Hatch Street studio.

In 1951, Freud’s first wife Kitty Garman accompanied him on a trip to Dublin and wrote to her mother, “Dublin looks very beautiful under a mist of Virginia creeper and gull’s wings. It is like nowhere else, very human and sad and lost.” But Freud found the “rawness” of Dublin stimulating. The weather in Ireland was his favourite anywhere, for its changeability, its shifting light. 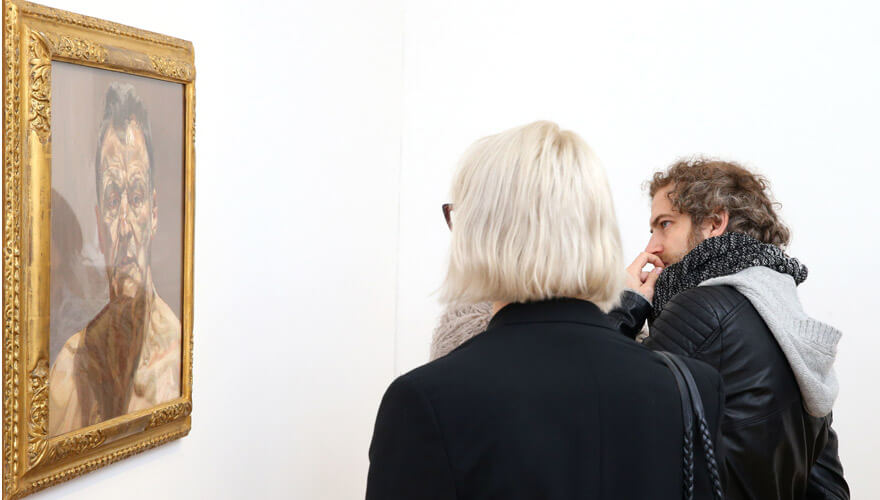 The Freud Project is spread over three floors. The first paintings you encounter are those of Freud’s own mother, painted after his father had died, when she was profoundly depressed. He spent hours with her each day to complete the paintings, which took months to finish. Was this his way of looking after her? The more cynical believe he only wanted to paint her when she became a shell of herself. But this was a time of great sadness for him also – he fretted that his own agitation would get into his depiction of the paisley pattern of her dress and “disrupt the calm of it.”

This is a collection of portraits of the faces of ordinary people in Freud’s life, an Ulster bookmaker and his son feature in ‘Two Irish Men in W11’, then separately in ‘The Big Man’ and ‘Head of an Irishman’. ‘The Man in a Check Cap’ sold Freud his daily newspapers.

In the gallery, people stand as close as they can to the work, examining the heaped ridges of paint, the encrusted noses and granular jowls, the painted flesh that appears to spill thickly over the collar of the ‘The Big Man’. “As far as I’m concerned, the paint is the person,” Freud would say.

Freud’s lengthy sittings meant that the subjects long forgot their posing and their expressions are often faraway, troubled. Freud was dismissive of his grandfather’s ideas of psychoanalysis, but Pat Doherty, the star of the ‘Donegal Man’ portrait, described the process of sitting for Freud as being “painted from the inside out”.

Considered by some to be a cruel portraitist, even the skin of youthful sitters like his daughters Bella and Esther contains some hint at decay. Freud’s ex-wife and Anglo Irish Guinness heiress Caroline Blackwood, likened his paintings to “prophecies” of the old people the sitters would become. 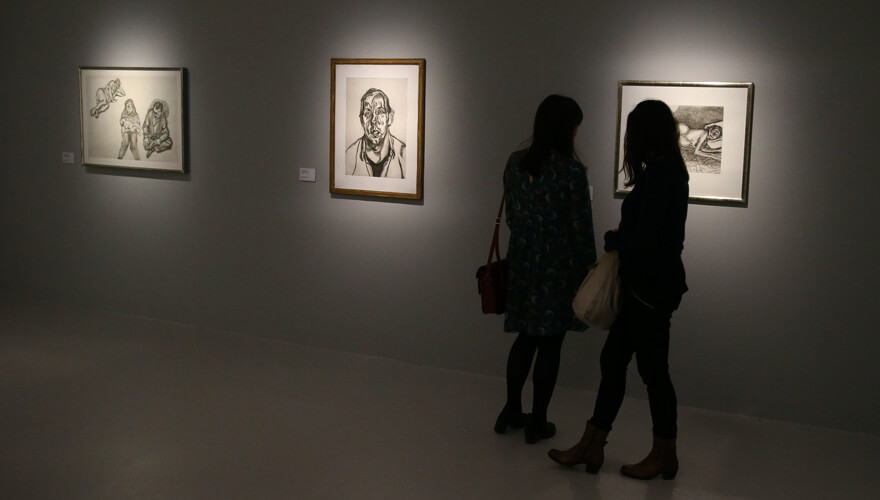 In the corridors, there are some David Dawson photographs of Freud at work. Dawson was his assistant, model and photographer for almost twenty years and his best pictures capture Freud looking like a wild cartoon maestro in full flight, hair askew, arms akimbo, bare-chested and revelling in his own aging flesh.

The Freud Project is set to become an “engine of ideas” for students and researchers to explore ideas of existentialism and portraiture. Dublin artist Amanda Coogan in giving her response to IMMA’s collection remarks how the paintings “groan with physicality.” Dublin photographer Amelia Stein notes that “the very presence of these works offers us time to contemplate and revisit.”

And with so much of Freud’s work here, and the Francis Bacon studio in the Hugh Lane Gallery across town, this new proximity of the works of great friends who once had dinner together daily makes Dublin a haven for those who continue to be fascinated by these wild men of modernism.

The Freud Centre will be here for the next five years which in a world inclined to scan, will facilitate some of that “extended looking” of which Freud was so fond. Then you can emerge from his vision into the peace of the IMMA gardens from which a bustling Dublin can be watched under Freud’s much-loved changing light.

“I mean if you could bottle it...”. Derek McEndoo is talking about the sound of his favourite church bells. Dublin.ie caught up with him to discuss all things bell ringing and, in particular, we wanted to find out about the bells at St. Patrick’s Cathedral, the National Cathedral of Ireland. He just happens to be the Ringing Master at St. Pat’s. Yes, Ringing Master. We’re talking to the right man and he’s been ringing for over fifty years. Derek is very quick to point out that he was a young starter.

Dubliners know where to find Armageddon, The Whore of Babylon and The Seven Headed Beast. They’re in the Book of Revelations. But where would you find the actual book? Well it so happens that most probably the earliest copy in existence (it’s called Papyrus 47) is right here in Dublin, at the Chester Beatty. It’s just one of the myriad treasures of this museum. There are Egyptian Books of the Dead, Japanese picture scrolls, Art Deco French book bindings: the range and depth of the collection is extraordinary. Chester Beatty himself – the man who made this collection – was a mining magnate. Jenny Siung, Head of Education

Mindfulness is a big buzzword around Dublin. What with social media, multi-tasking, and generally running around like mad things, Dubliners are in need of new ways to unplug and relax. Mindfulness is one way to answer this need. Which is why it’s moving from the hippie fringe to the mainstream. We have so much going on in our heads, and so many items on our mental to-do lists, that we often carry out daily tasks without being conscious of what we’re doing. Or being able to remember it later. ‘Did I turn off the immersion?’ we wonder. ‘What time did I arrange the meeting for?’ We worry that our house will be robbed because we can’t remember locking the door. W